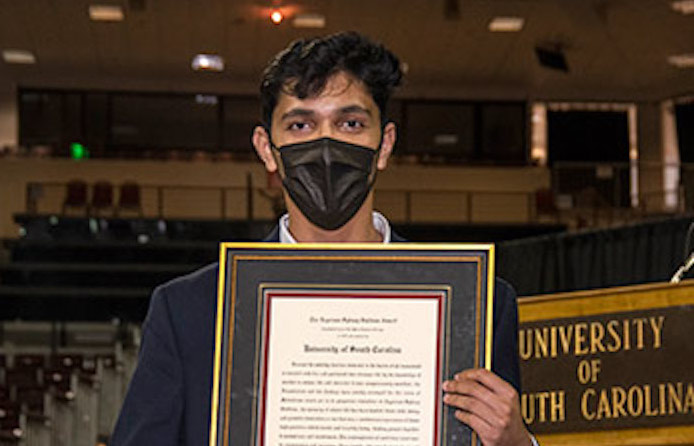 Adarsh Shidhaye “hit the ground running” when he arrived at the University of South Carolina, thanks to a pre-medical summer camp offered by the Office of Pre-Professional Advising. The program was so valuable to him that he started working as an ambassador during his freshman year, providing that same help to incoming students.

“Acting as a support system for students going through a similar process as myself allowed me to further my commitment to medicine and love for mentorship,” Shidhaye said.

Shidhaye’s service to his fellow students, while earning a degree in public health as well as minors in business administration and medical humanities and culture, also earned him the university’s highest undergraduate honor, the Algernon Sydney Sullivan Award. The award is given each year for outstanding achievements, campus leadership, exemplary character and service to the community.

Isobel “Issy” Rushton was the other Sullivan Award recipient from UofSC this year. Read about her here.

“Since my freshman year at USC, I have aimed to make an impact during my time at Carolina,” Shidhaye said. “Through my involvement with numerous student organizations, student employment through a variety of campus departments, and a multitude of co-curricular experiences, I believe that I have exemplified my commitment to the University of South Carolina.”

A Capstone Scholar, Shidhaye was also a Presidential Academic Excellence Scholar and Galen Health Fellow. He was a member of the Sigma Phi Epsilon fraternity, the Order of Omega Greek Honor Society and the Alpha Epsilon Delta Pre-Health Honor Society.

Adarsh also volunteered at the Free Medical Clinic and Harvest Hope Food Bank. Most recently, he served as a peer educator with the UofSC Career Center. “Through my role as a Career Studio Peer Educator, I have been able to provide a wide array of advising and support services to students during COVID-19,” he said. “I am humbled by the opportunity to serve USC during this time.”

Shidhaye has worked as a photographer and content director for the Garnet & Black magazine.

In the Columbia community, Shidhaye, who hails from Elgin, S.C., volunteered at the Free Medical Clinic and Harvest Hope Food Bank. In his free time, he plays the violin, viola and piano, specializing in Indian classical music.

This article has been edited slightly from the original version appearing on the University of South Carolina website.