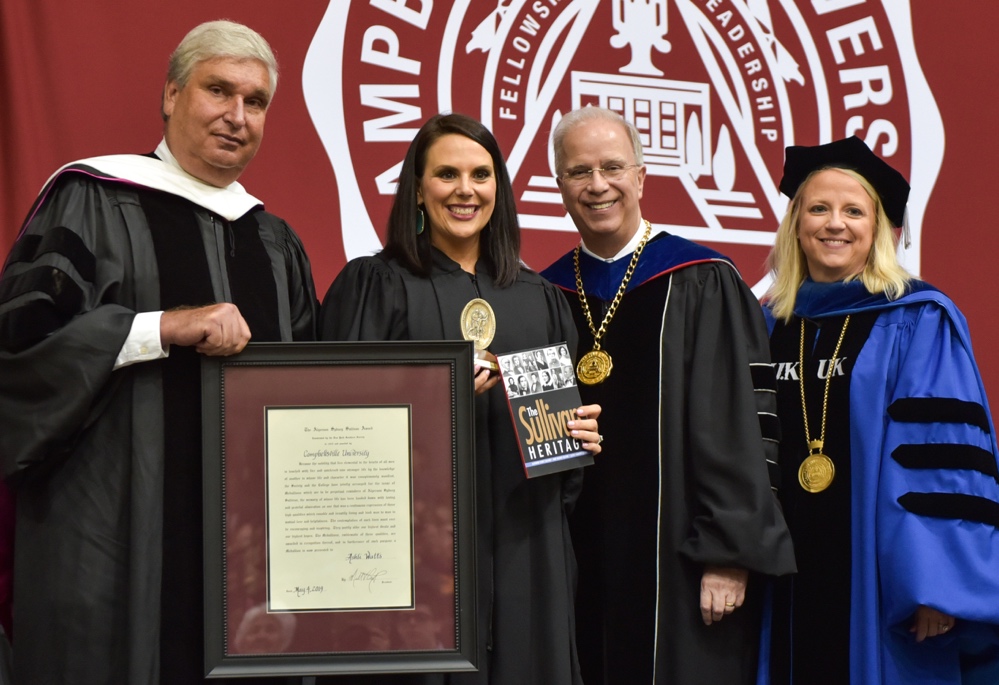 Campbellsville University (CU) honored alumnus Ashli Watts, the senior VP of public affairs for the Kentucky Chamber of Commerce, with the 2019 Algernon Sydney Sullivan Award for her longtime service to the community.

Dr. Michael V. Carter, along with Board of Trustees Chairman Henry Lee and Dr. Donna Hedgepath, provost and vice president for academic affairs, presented the award to Watts.

Watts joined the Kentucky Chamber of Commerce in November of 2012.  Before that, she worked at the Kentucky Bar Association and the Legislative Research Commission. She graduated from Campbellsville University with a bachelor’s degree in political science and history in 2004 and holds a master’s degree in public policy and administration from the University of Louisville.

“During her time at Campbellsville University, Ashli was very active in campus life, served as Student Government Association president, was an academic honors graduate, and participated in a number of student activities and organizations,” Carter said.

As a member of the board of directors of Prevent Child Abuse Kentucky, Watts works to raise awareness about issues related to preventing child abuse and neglect. She and her family are active members of First United Methodist Church in Frankfort, where she lives with her husband Ryan and their two children, Emma and Carter.

CU was selected in 2002 to participate in the Sullivan Awards program, which honors the memory and legacy of the late Algernon Sydney Sullivan and his wife, Mary Mildred Sullivan.

Jessica Johnson was CU’s student recipient of the Sullivan Award. Read more about her here.