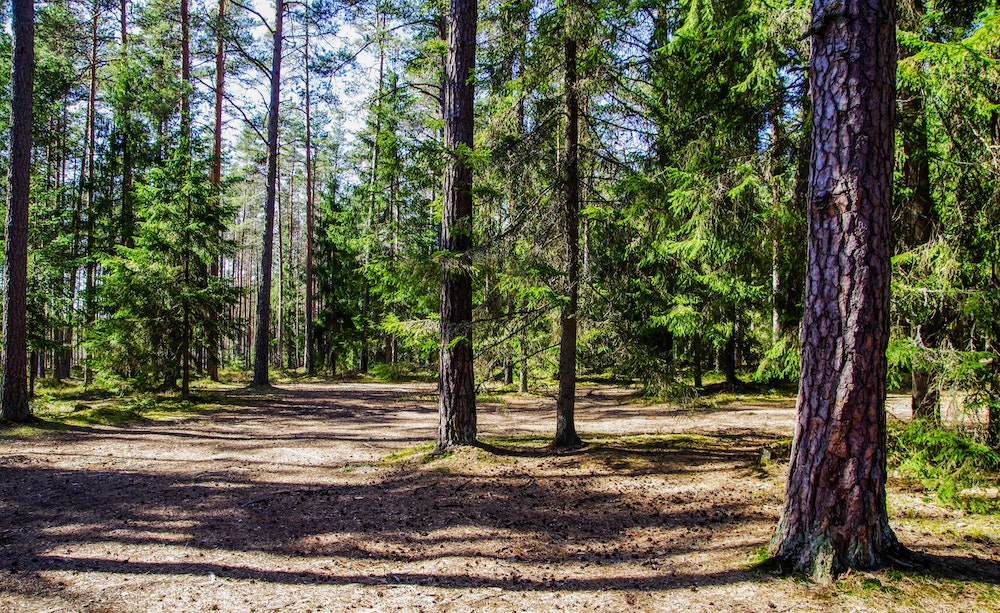 Two forestry professors at Sullivan Foundation partner school Auburn University lent a hand to hugely popular YouTube scientist Destin Sandlin in an effort by internet content creators to raise $20 million for the Arbor Day Foundation, which has agreed to plant one tree for every dollar raised at teamtrees.org.

Professor Becky Barlow and Research Fellow John Kush of Auburn’s School of Forestry and Wildlife Sciences joined up with Sandlin, whose YouTube channel, “Smarter Every Day,” has more than 8 million followers, to share their insight and raise awareness about the growth cycles and conservation of trees.

Sandlin’s video, How to Plant 20 Million Trees, which features Barlow and Kush, has received more than 1.3 million views. It’s part of the National Arbor Day Foundation’s lofty goal to raise $20 million in order to plant 20 million trees. The goal was met well before the deadline, and the project is retaining its momentum: By the end of February, the fundraiser had surpassed its goal, with more than $21.7 million raised and donations continuing to pour in. To see a live count as the donations continue—or to make a donation in honor of National Arbor Day—go to teamtrees.org.

Kush said he had no idea how far a group of YouTube videos could go in terms of raising awareness and advancing education. “I was amazed,” Kush said of the million-plus views Destin Sandlin’s video received. “It’s great exposure for the longleaf pine, the School of Forestry and Wildlife Sciences and Auburn University. I had no idea how many people subscribe to some of these YouTube channels.” 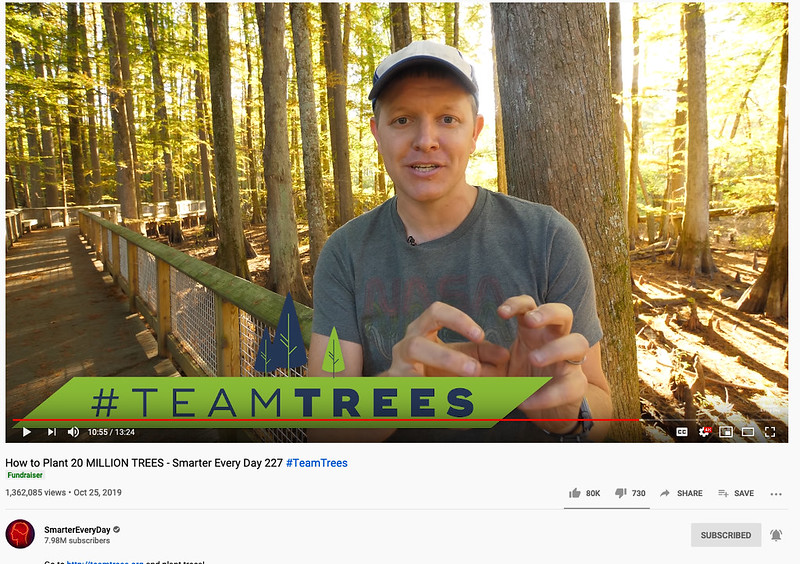 Auburn University forestry professors helped Destin Sandlin of “Smarter Every Day,” to raise $20 million for the Arbor Day Foundation, which has agreed to plant one tree for every dollar raised at teamtrees.org.

The #TeamTrees campaign was started by internet content creators, sparked by a tweet from YouTube star Mr. Beast, who decided to commemorate reaching the 20 million subscriber mark by setting off a viral effort to plant 20 million trees. In May, his fellow YouTuber Mark Rober teamed up with Mr. Beast and his crew to kick off the project by planting trees in a field in Oregon. On the project’s launch day, Oct. 25, Rober posted a video of that tree-planting and, with Mr. Beast and others—including Sandlin—began to rally social media influencers to spread the word about the #TeamTrees project, which ran through Dec. 31.

Since the trees are scheduled to be planted in locations worldwide, this effort places an emphasis on planting trees that are native species, where local conditions and forest plans allow. The National Arbor Day Foundation’s motto sums it up: “To plant the right trees, in the right place, at the right time, for the right reasons.”

Which Trees, Where to Plant and Why

Destin Sandlin made a pitch to Auburn’s School of Forestry and Wildlife Sciences, including the lines, “I’d love to include Auburn University in the video [even though I’m a Bama grad]. You’re the authorities on forestry, and I’d like to highlight that to an international audience.”

Sandlin, who’s examined nature worldwide in his video adventures, has a keen interest in trees, and he’s familiar with Auburn’s forestry work: Back in the 1960s, his grandfather worked with Auburn students to see whether a group of newly planted longleaf pines would grow on his property, just north of the species’ range. Only two of the many trees planted on his grandfather’s land survived. One lived until the mid-1970s, and the other lived until the late ’80s.

“My hope was that, if we are going to plant 20 million trees, we should gain some scientific knowledge about what species will perform best in certain soils and climates,” Sandlin said of his contribution to the #teamtrees project. “Environments and ecosystems change, and I see this as a gigantic opportunity to gain data for the snapshot of time that we live in. What happens will be left up to the Arbor Day Foundation, but I hope to work with Auburn to gather data in some way.”

“Dr. Barlow and Dr. Kush share my passion for education, but also were willing to lay out the facts in a clear, intelligent and respectful way,” he added.

Barlow and Kush were enthusiastic to share their expertise with Sandlin and his viewers. Barlow explained the importance of silvics—the study of the life history and character of forest trees. In the video, she explains the importance of the location in which trees occur, their growth levels, need for sunlight and tolerance of shade. She also emphasized that some species require higher levels of maintenance than others.

In the video, Kush’s statement that certain trees need fire to survive seemed to take Sandlin—and probably his viewers—aback. But Kush said getting the word out about the health of the longleaf pine was one reason he was excited to work with Sandlin. He said the ecology of the longleaf—particularly its need of fire—is often misunderstood. 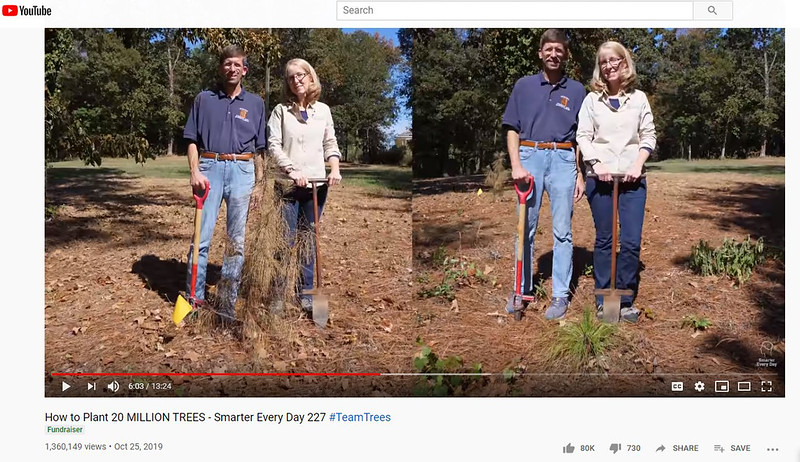 Auburn’s Becky Barlow and John Kush joined up with Destin Sandlin of YouTube channel “Smarter Every Day” to raise awareness about the growth cycles and conservation of trees.

Kush noted that the species evolved with frequent fire. “We need to be proactive and increase our use of prescribed fire,” he said. “This will not only help in longleaf pine management but improve wildlife habitat for game species as well as numerous threatened and endangered species in the Southeast.”

Sandlin was grateful that Kush shared this fact with viewers. “It can be quite a challenge to help people understand that, at times, fire can be good for the ecosystem,” Sandlin said. “I believe our message got through.”

The planting of 21.5 million trees is already underway, with specific projects planned for the spring, summer and fall of 2020, according to a joint press release from the National Arbor Day Foundation and #TeamTrees.

The funds are helping replant trees lost in the unprecedented 2018 California wildfire season, in which 8,000 fires burned through more than 1.8 million acres of forestland. Replanting this area will prevent mudslides and degraded soil, water and air quality and other challenges. The project is part of a four-year reforestation effort that will help families recover from those wildfires.

This spring and running through summer, the #TeamTrees team will aid in the replanting effort in Kenya’s Kijabe Forest, an important wildlife corridor and water source for the country that has been damaged dramatically over the past 15 years as it has been cleared for charcoal and timber. The newly planted trees will help re-establish a sustainable water supply, restore habitat for wildlife by stabilizing landslide-prone slopes and secure local livelihoods.

In the summer and fall, the team will help reforest the Cauvery River Basin in southern India, which has shrunk by about 40 percent from its historical flows over 70 years, resulting in scarce drinking water and difficult farming conditions. A loss of tree cover has also led to poor soil health. Reforesting the basin and educating farmers will help stabilize the river and improve soil conditions over time.

A Crowd-Driven Effort
In the end, the widespread social media push to raise awareness and educate had the greatest impact on the effort, with #TeamTrees identifying more than 800,000 unique donors. A handful of billionaires, including Elon Musk and Tobias Lutke, did contribute to the cause, but for the most part this was a grass-roots success.

“I predicted a few more wealthy individuals or organizations would realize the PR potential and jump on board,” Sandlin said. “The fact that the majority of funds for the Arbor Day Foundation were raised by individuals feels really good.”

This article was edited slightly from the original version appearing on the Auburn University website.