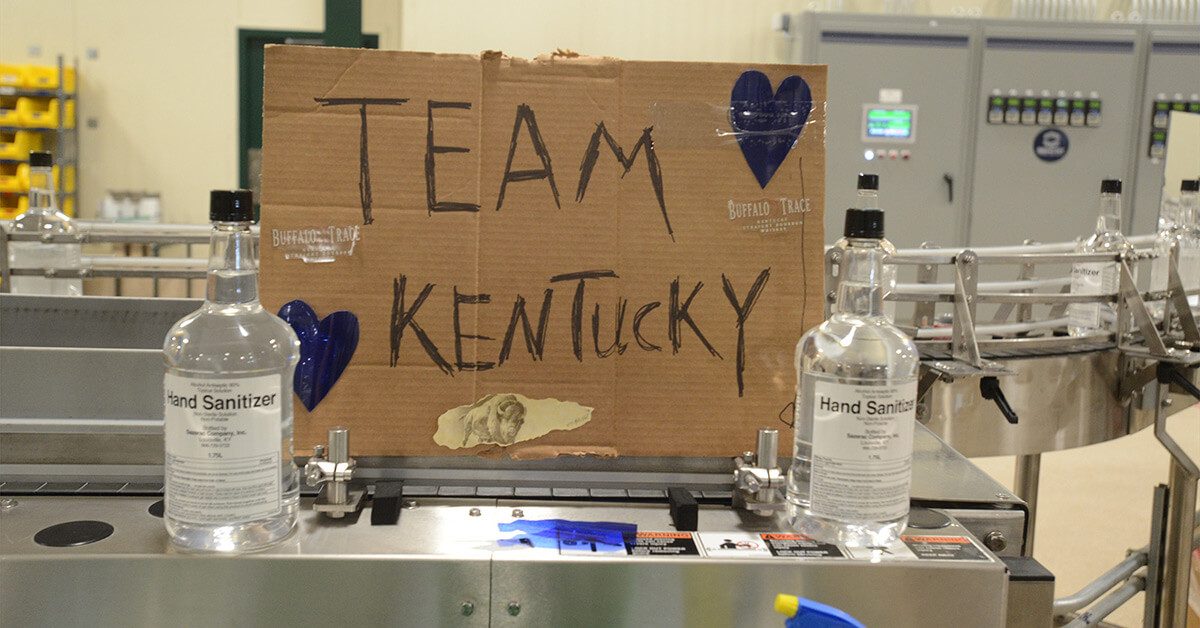 Distilleries have now joined the fight against the novel coronavirus (COVID-19) by producing hand sanitizer, which has alcohol as its main ingredient, on an industrial scale.

Jonathan Richtarsic, who is working on his executive master’s in business administration at Sullivan Foundation partner school Bellarmine University, is helping with production of hand sanitizer at Sazerac, the parent company of Buffalo Trace Distillery. As bottling project manager, “My part in this process was to lead the project team and get the end-to-end business started,” he said.

The Sazerac Company, the largest producer of distilled spirits in North America, started initial production of hand sanitizer on March 27 at Buffalo Trace in Franklin County, Ky., followed by its Glenmore Distillery in Owensboro, and has since been rolling it out to all its locations across the country, including Barton 1792 Distillery in Bardstown, Ky., and the Northwest Ordinance Distilling (NOD) plant in New Albany, Ind.

The distillery is responding to requests for hand sanitizer from the healthcare, government, military, retail, distribution, airline, pharmacy, and banking industries.

“Many of these organizations are desperate, as supplies have dwindled,” Matt Maimone, Sazerac’s chief operating officer, said in a news release. “We have received requests to date for over 5 million bottles of sanitizer, which we are prepared to meet, and possibly more.”

The Kentucky Distillers’ Association announced on April 15, meanwhile, that its member distilleries have collectively produced and donated nearly 125,000 gallons of hand sanitizer across Kentucky to frontline workers, hospitals and healthcare facilities. (Sazerac is not a KDA member.)

To put that amount into perspective, KDA President Eric Gregory said 125,000 gallons of hand sanitizer would equal more than 630,000 “fifths” of whiskey, or 750ml bottles as they are labeled today.

Distillers are following Food and Drug Administration guidelines for production and labeling that is consistent with the World Health Organization sanitizer formulation, Gregory said.

This article has been edited slightly from the original version appearing on the Bellarmine University website.