When Brooks Herring decided to give college a try after serving in the U.S. Navy and working for the Army, he had one goal in mind: Creating a physical therapy program that would help wounded service members get back to the level of strength and activity they had before their injury.

All during his undergraduate years at Sullivan Foundation partner school University of South Carolina, the self-described Gamecock for life says he took every opportunity to have a typical college student experience while never losing sight of his ultimate goal.

Herring is in his second year of the doctor of physical therapy program at the university’s Arnold School of Public Health. After that, he plans to pursue a Ph.D. in exercise science, focusing on his goal of using research-based evidence to help improve the lives of wounded veterans. 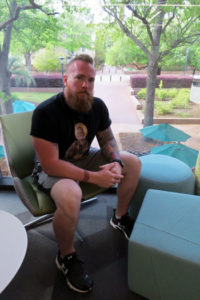 Brooks Herring in 2018, the year he earned his degree in exercise science at the University of South Carolina

Herring served in the Navy from 2005 to 2011 and deployed to Iraq and Africa. He was an Army civilian from 2011 to 2013 and deployed to Afghanistan. He made a commitment to give back to others who have sacrificed while serving their country. “I came home with all 10 fingers and toes, and I feel guilty about that,” Herring said.

“I recognized after I started as a student that there was a need for advocacy on campus. My personality type just doesn’t let me sleep knowing (there’s that need for veterans) unless I’m doing something about it,” added Herring, who was born on an Air Force base in Louisiana and raised in Conway, South Carolina.

He has created Run Phase, a 501(c)(3) nonprofit that has partnerships in place waiting for him to finish his doctorate so he can begin working with veterans. Herring is working with professors in his graduate program to learn as much as he can about the human body and to use best practices to create a program that will help a variety of injuries.

“A lot of the work that needs to be done will come after graduation,” Herring said. “It will be a clinic with a different approach.”

The goal of much physical therapy is to get the patient able to handle daily tasks needed for independent living, such as being able to get around or take care of personal needs inside the home. What Herring envisions is more like the physical therapy that high-performance athletes undergo to rehab an injury.

“This is a young, physically fit, active and motivated population that has gone from a very high level of performance to a very low level,” Herring says of soldiers who have suffered a traumatic injury, such as the loss of a limb, a severe burn or brain injury associated with improvised explosive devices seen so much during the recent wars in Iraq and Afghanistan.

“You couple that with combat trauma and you’re adding a psychological component that often isn’t even considered during PT,” Herring says. “Our current therapy regimens are getting them nowhere near where they were.”

Herring’s program would take over where traditional physical therapy leaves off — “for those that want to get to the next level of rehab.”

The clinical component for now will require funding because that is not the goal of federally funded physical therapy for service members. But Herring hopes that once he has completed his second doctorate, which will allow him to focus on research, he will be able to show the value of the higher level of rehab so it will be paid for by veterans’ benefits.

“I am able-bodied enough to benefit those who weren’t as lucky as I was,” Herring says. “I know the benefits of physical activity and I want to bring that experience home to others.”

This story was edited slightly from the original version appearing on the University of South Carolina website with additional material from this article.