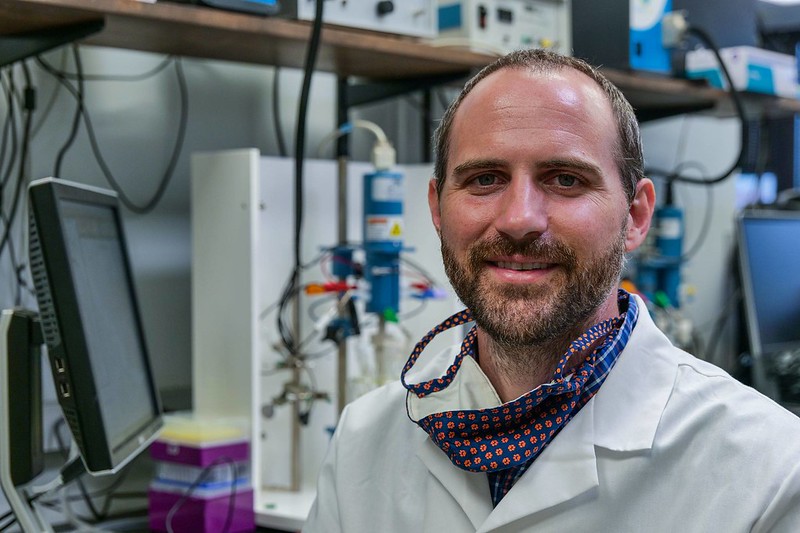 The quest to find more efficient renewable energy sources is growing across the globe, and one chemistry professor at Sullivan Foundation partner school Auburn University is dedicating his research to taking the cause to the next level in the coming years.

Byron Farnum, an assistant professor in Auburn’s Department of Chemistry and Biochemistry, is tasking his research team, The Farnum Group, with storing harnessed solar power in a more efficient way in an effort to power-pack batteries to store twice the amount of energy. The hope, he says, is to add a second electron to the reaction mechanism at the molecular level to double the storage units’ power capacity.

Once that is achieved, engineers and other leaders in the energy sector can take the improved power source—large-scale redox-flow batteries, which store energy in the form of reduced and oxidized small molecules—and apply it to real-world applications. That could translate down the road into solar-powered grids capable of powering entire cities.

“Energy from the sun, at least in our lifetime, is limitless,” Farnum said. “I want to come up with new and clever ways of designing molecules so they can store more energy. Then, an engineer can come along and put that molecule in the battery and study how it can be cycled. It’s just a no-brainer, and I think we have to move more and more in the direction of renewable energy.” 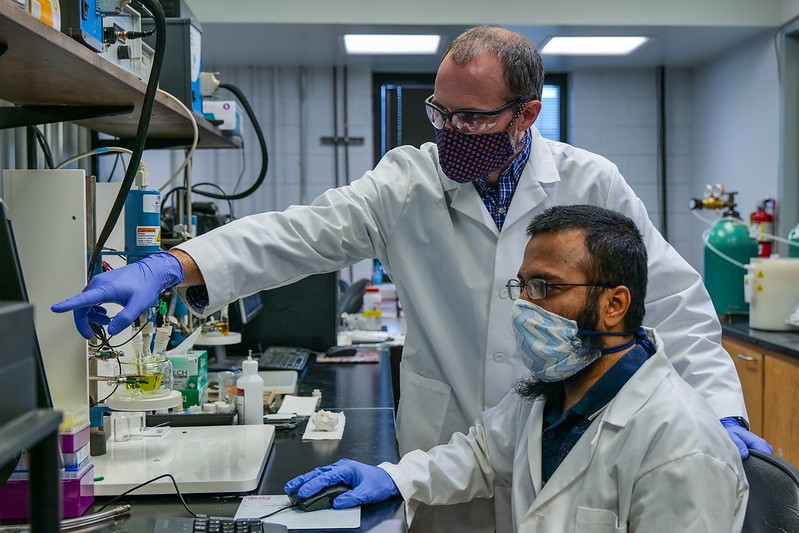 Lithium ion batteries, common in smartphones, laptops and other devices, are currently the industry standard for compact energy storage. Farnum and his research team will be using electrochemistry to oxidize inorganic complexes comprised of nickel, a lightweight, earth-abundant metal with a low price point, as they search for ways to double power capacity that can be expanded to a grand scale.

“The challenge with lithium ion batteries is that, when you start to scale them up to make a battery that is the size of a table, its weight becomes huge,” Farnum said. “The way it conducts electricity and the way the lithium ions move in that device means that the efficiency begins to drop off as you get bigger and bigger. So, we’re trying to store two electrons per atom, compared to a lithium ion battery, where roughly you’re only going to store one electron per atom.

“In order to really push toward doing two-electron chemistry versus one-electron chemistry, we need to understand how to control the molecular environment around nickel. Doing so could double your energy density just by storing two electrons instead of one.”

A long-term goal of scientists dedicated to renewable energy is to provide immense amounts of power via efficient storage mechanisms like batteries. Large-scale implementation of improved sources could be revolutionary. “The scale of it is definitely important,” Farnum said. “You want to store as much energy in a small amount of space. All our research, even outside this one project, is focused on broader themes around solar energy and renewable energy. We are always thinking about if it’s worth us doing this research if it couldn’t be applied later. That’s always in the back of our mind. As of right now, no one has made a battery that’s designed using our strategy for inorganic molecules.”

Farnum’s research will be funded by a $682,030 National Science Foundation CAREER Award he received earlier this spring, a big shot in the arm for him and his team. 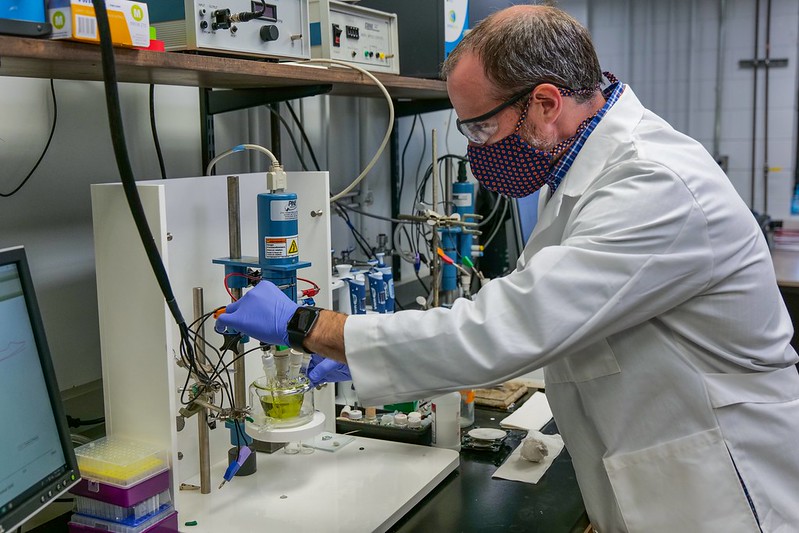 Farnum will be looking for engineers and other leaders in the energy sector to take his team’s improved power source and apply it to real-world applications at the end of its five-year project. That could translate down the road into solar-powered grids capable of powering entire cities. (Photo by Phillip Coxwell)

“It’s huge,” said Farnum, who will use most of the funds to pay for graduate student stipends and research supplies. “For one, it gives us security to keep going in this direction and gives us confidence that we know others around the country who have reviewed the grant support this idea and the National Science Foundation thinks it’s worthwhile. It gives me a big confidence boost.”

The five-year grant is non-renewable, but Farnum plans to use it to lay the foundation for future research.

“The idea is that, at the end of the five years, we will be able to write another proposal based on an extension of these ideas,” he said. “After five years, we will have learned enough about these molecules that we will have designed totally new ones and will know how they’ll function in lab-scale batteries. We’ll be ready to take the next step, for sure. Whether it’s scaling up or going another direction toward a different molecule or metal, it’ll always keep going forward.”

Farnum says his research will be focused on two main goals in the coming years. “We really have to understand the mechanism, so our first goal is to understand how the electron transfer—putting electrons on the molecule or taking them off—is coupled with rearrangements of the molecules’ shape,” he said. “As a second goal, if we can realize the most important steps for two-electron transfer, then we can amplify those steps with new molecular design. At the end of the five years, we want to have those two pieces down pat.”

“We want to show that we can do two-electron storage with this molecule,” he said. “We want to have lab-scale demonstrations of it and have collaborations with other people. The dream scenario would be [that] we have a patent, and it would be something we could potentially commercialize by getting it to someone who really knows what they’re doing in terms of manufacturing and scale.”

If successful, Farnum said the research could lay the foundation for substantial practical applications. “We need people who are doing really small, detailed, fundamental work and then other people who are going to say, ‘Oh, that looks interesting, I’m going to apply that to this battery technology,’” he said. “Then someone else says, ‘Now, I’m going to make a product,’ and somebody above that saying, ‘Now I’m going to scale it out and distribute it across the country.’”

Variables and challenges abound at every corner, so Farnum and his team will need years to vet a trial-and-error process common in scientific research to make progress and see results. “That’s the nature of science and experimentation,” Farnum said. “Most of the time, it doesn’t work, but you keep trying, keep trying and keep trying.”

This article has been edited slightly and condensed from the original version appearing on the Auburn University website.