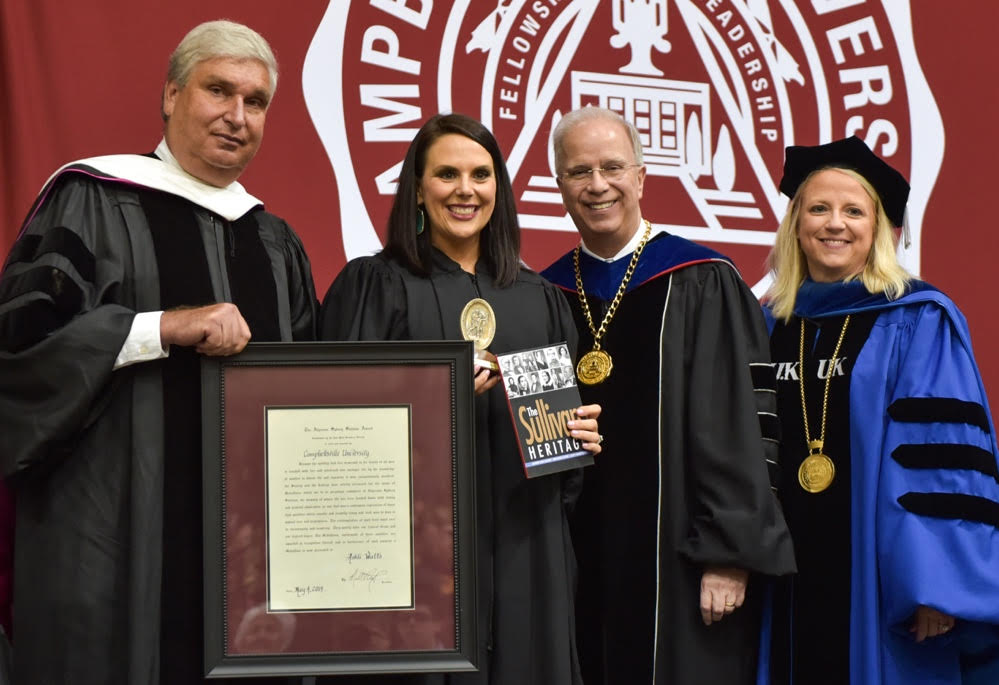 Ashli Watts, the senior vice president of public affairs for the Kentucky Chamber of Commerce, wasn’t just the guest speaker for the commencement ceremony at Campbellsville University (CU) this May. She was also the recipient of the 2019 Algernon Sydney Sullivan Award.

CU president Dr. Michael V. Carter, along with Board of Trustees Chairman Henry Lee and Dr. Donna Hedgepath, provost and vice president for academic affairs, presented the award to Watts.

Watts joined the Kentucky Chamber of Commerce in November of 2012.  She had previously worked at the Kentucky Bar Association and the Legislative Research Commission.

Watts graduated from CU with a bachelor’s degree in Political Science and History in 2004 and holds a master’s degree in Public Policy and Administration from the University of Louisville.

“During her time at Campbellsville University, Ashli was very active in campus life, served as Student Government Association president, was an academic honors graduate, and participated in a number of student activities and organizations,” Dr. Carter said.

“Ashli is very active in a number of organizations and serves as a member of the Board of Directors of Prevent Child Abuse Kentucky, a statewide nonprofit organization through which she works with others in raising awareness on issues related to preventing child abuse and neglect. Ashli and her family are active members of First United Methodist Church in Frankfort. She currently resides in Frankfort with her husband Ryan and their two children, Emma and Carter, who join us today for the ceremony, along with other family and friends.”

CU has presented the Sullivan Award since 2002, Carter noted. “Mr. Sullivan was a lawyer, devout Christian, mediator, powerful and appealing orator, a courageous citizen during perilous times, a noted philanthropist and a devoted family man. In the words of a friend, Sullivan ‘reached out both hands in constant helpfulness to others.’”

Campbellsville University is a widely-acclaimed Kentucky-based Christian university with more than 13,000 students offering over 90 programs of study including Ph.D., master, baccalaureate, associate, pre-professional and certification programs. The university has off-campus centers in Kentucky cities Louisville, Harrodsburg, Somerset, Hodgenville, and Liberty, with instructional sites in Elizabethtown, Owensboro and Summersville, all in Kentucky, and one in Costa Mesa, Calif., and a full complement of online programs. The website for complete information is campbellsville.edu.