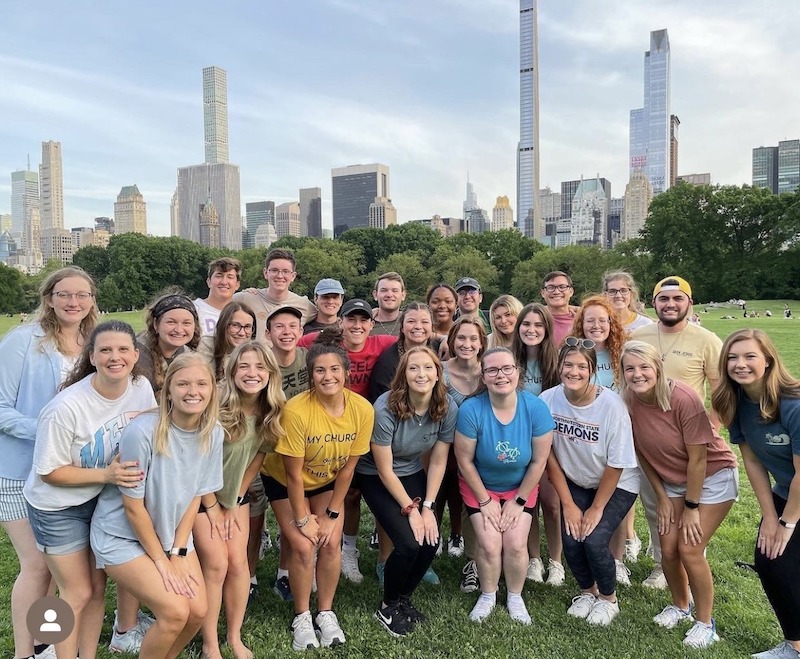 Every city has its problems, and Denver—for all its scenic beauty and wealth—is no exception. In fact, three students from Sullivan Foundation partner school Carson-Newman University, located in Jefferson, Tenn., spent a summer of service in the Mile High City this year and found a lot of people feeling low.

They were part of the North American Mission Board’s Gensend program, which nudges college students out of their comfort zones and into large cities to bring comfort to people in need—whether financial or spiritual.

According to the Baptist Press, Kirby Logan, a rising senior at Carson-Newman, was one of the participants. Walking through a park this summer, he soon found himself offering solace to a man who was experiencing his first night of homelessness.

“We had this conversation about how he didn’t have any friends in Denver and how he just wanted to get out,” Logan said in the Baptist Press story. “Denver had really broken him. I gave him my big Bible that I had had all summer and told him that he can read it and hear from God. I started to walk away, and I remembered that [the other GenSenders] had a cookout going a block down the street. I walked back to the bench where I had left him [to invite him to the cookout], and he had already opened the Bible and started reading.”

During his GenSend experience, Logan said he learned that “poverty looks different for every person.”

“Poverty is not just not having a house or food,” he said. “It can be having no friends or struggling with deep depression or needing a job and not knowing anyone that can help you. We intentionally went and talked to people who looked like they needed a conversation. Whether it was a gospel conversation or not, it was nice for them to know that they had someone that cared enough to talk to them.”

Not everyone will accept an invitation to church, he noticed, which made the GenSenders’ conversations with the people they met even more crucial.

Keaton Hubbs, also a senior at Carson Newman, said the team set out to plant seeds of hope and truth, but they don’t necessarily bear fruit right away. “Restoration isn’t just making a bad thing better,” she said. “We don’t just desire to clean up a person and let him look nice. We desire the full restoration of a person, which can take time.”

Another GenSender from Carson Newman, Lauren Potter, noted a spiritual hunger among the people she met this summer. “Most people in Denver are not from Colorado because they come there from other places in search of something,” Potter said. “Pretty much everyone there wants to have something to die for that they’re huge on. There’s a lot of spiritual people but not religious people.”

“One of our biggest takeaways as a whole group was that a lot of times, we [tend to] romanticize the more attractive styles of ministry,” Potter added. “One thing that we spent a lot of time thinking about was being a faithful presence. We have learned to be content in the mundane.”

According to GenSend’s website, the program is “designed to teach students how to engage a fallen world with the transformative hope of the good news.” It provides “immersive hands-on training” to “give students the ministry mindset needed to become lifelong missionaries…equipped to confidently make disciples and serve communities in need.”

In addition to Denver, the program dispatches college students to serve in more than 20 cities in the U.S. and Canada, including New York, New Orleans, Los Angeles, Miami, Salt Lake City, Phoenix, Boston, Toronto, Vancouver and Montreal, and to Puerto Rico as well.