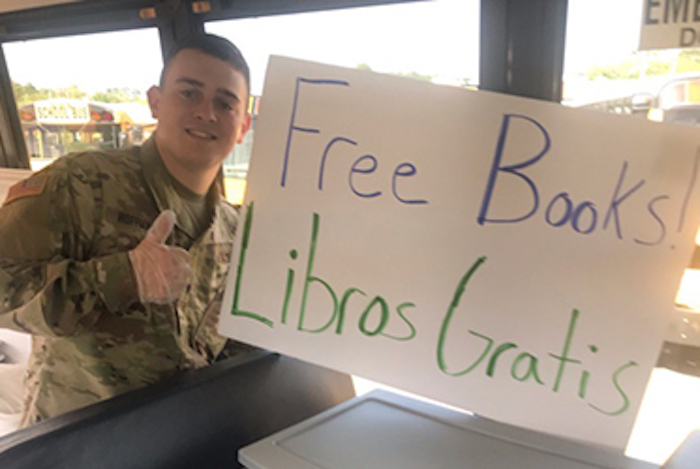 Charles Hoffmann, a Winthrop University student majoring in elementary education, traveled to Horry County, S.C., in April 2020 for what was originally a two-week mission to deliver meals to children in need. It ended up turning into two months.

Growing up in Clover, S.C., Hoffmann, a U.S. Army National Guard Specialist, greatly admired his parents’ and grandfather’s dedication to their country. His mother served as a Judge Advocate General in the Tennessee Army Guard for 24 years, while his father served as a field artillery officer in the 101st Airborne Division.

“I mainly joined the National Guard to help pay for school but also because I wanted to carry on the tradition of serving in my family,” Hoffmann said. “Both my parents served in the Army as well as my grandfather, and it makes me extremely proud to follow in their footsteps.”

As part of their work with the Guard’s 1050th Transportation Battalion and the 178th Engineer Battalion, Hoffmann and his fellow soldiers found themselves in Horry County this spring.

“We were tasked with driving the school buses on routes to deliver meals to kids,” Hoffmann explained. “My route took me right into downtown Myrtle Beach, and I had several stops at motels and trailer parks where hundreds of kids live. The civilian bus drivers that had been doing my route before had been handing out books to the kids.”

He decided to try and raise money to buy books. “Once the librarians in the school district found out what we were doing, we had more books than we could give away,” Hoffmann said. “In total, we distributed upwards of 2,000 books throughout Horry County. This was only made possible with the help of my fellow soldiers from the 1050th Transportation Battalion and the 178th Engineer Battalion.”

For his efforts, Hoffmann was honored by NASCAR this summer as part of its NASCAR Salutes Refreshing Moments campaign.

Throughout his National Guard career, Hoffmann said, he has appreciated being able to take part in COVID-19 relief missions, including missions for DHEC, the Medical University of South Carolina and other medical organizations that are operating mobile test sites statewide.

“Being able to serve your country as well as your community and state is one of the reasons the National Guard is so unique,” he said.

This story has been edited from the original version appearing on the Winthrop University website.