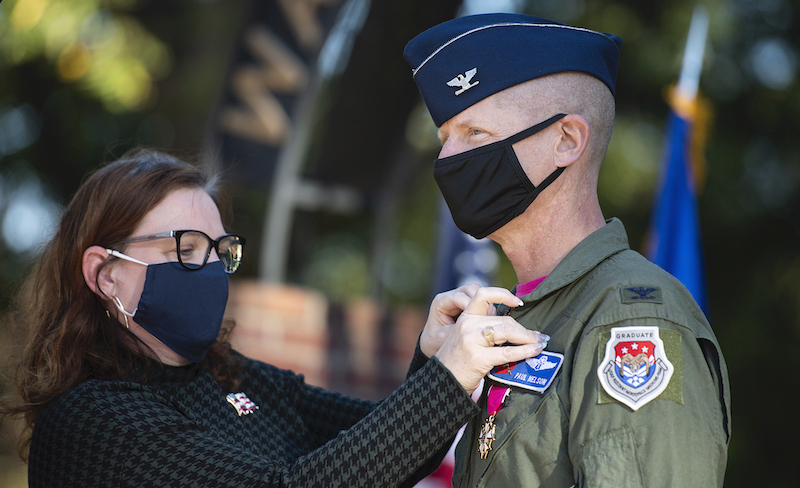 By JB Clark, University of Mississippi

Retiring flight surgeon Col. Dr. Paul “Voodoo” Nelson said he joined the U.S. Air Force “for all the wrong reasons.” But since then, Nelson, who was recently honored for his 31 years of military service at his alma mater, the University of Mississippi, has done a lot of things right, serving both his nation and people in need and placing service above self in the finest Sullivan Foundation tradition.

“I thought I would look cool in a flight suit and that chicks would dig me and I would get to fly in cool jets,” Nelson reflected at the ceremony in UM’s Grove in Oxford, Miss. “I went to medical school because you could be your own boss and live in a fancy house with a cool car.”

Related: University of Mississippi’s Lauren Graham honored as one of the nation’s top student veterans

“While some of that did happen, and I indeed got the girl of my dreams, those are terrible reasons to choose a career,” he continued. “And while I drive a used SUV daily, I live in the house I grew up in, which is pretty cool!”

Nelson and his wife, Betsy Moore Nelson, both graduated from Ole Miss, a Sullivan Foundation partner school, in 1989. Their three-decade arc of service to their country has taken them around the world and right back where they began. A graduate of the Air Force Reserve Officer Training Corps program’s Detachment 430 at UM, Nelson was commissioned more than 31 years earlier in the very same location in the Grove where the recent ceremony took place. His retirement celebration beneath the Walk of Champions arch included family, friends, members of the community and fellow service members.

“Paul is one of the few doctors who believes that, when he becomes your doctor, he is all in; you got his personal cellphone and email because he takes the patient-physician relationship seriously,” retired Brig. Gen. (Dr.) Kory Cornum said. “He epitomizes the whole-person concept: good doctor, aviator and airman, but also good husband, father, son, and good friend and neighbor.” 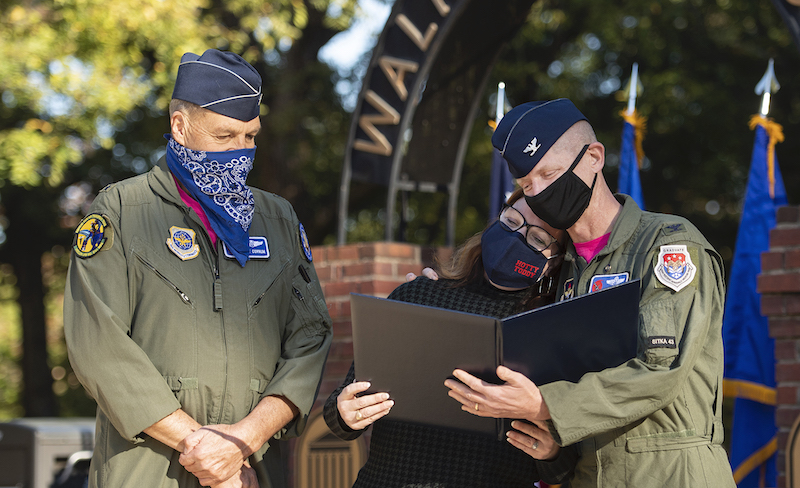 Joining the ceremony was another Ole Miss AFROTC alumnus, retired Col. Orville Robertson, who served as Nelson’s first AFROTC commander in the mid-1980s. Robertson and Nelson compared notes about service, with Nelson relaying stories about his service as Civil Air Patrol senior mentor faculty adviser, working with organizations across Montgomery, Ala. and the Alabama River Region.

Nelson described an entire community team that developed a program to introduce underprivileged students in the Montgomery area to aviation. Experienced military aviators and leaders worked with young people in the community as mentors, even taking them on orientation flights and offering further flight lessons.

Related: Col. Elizabeth Steadman: A hero in peace and in war

“The goal was never just to have the kids join the military, although certainly we were all very proud that some former students have gone on to enlist or competed successfully for ROTC or service academy scholarships,” Nelson said. “Rather, the team’s objective was to provide support and mentorship for these kids and give them the opportunity to see the world and all of its possibilities, their possibilities, from a new lens.”

“Whether it was at the controls of an airplane while flying for the first time, learning how to come together as part of a team, or participating in STEM activities with mentorship from successful adults they could look up to … it was about paying it forward to those kids less fortunate than we were,” Nelson recalled. 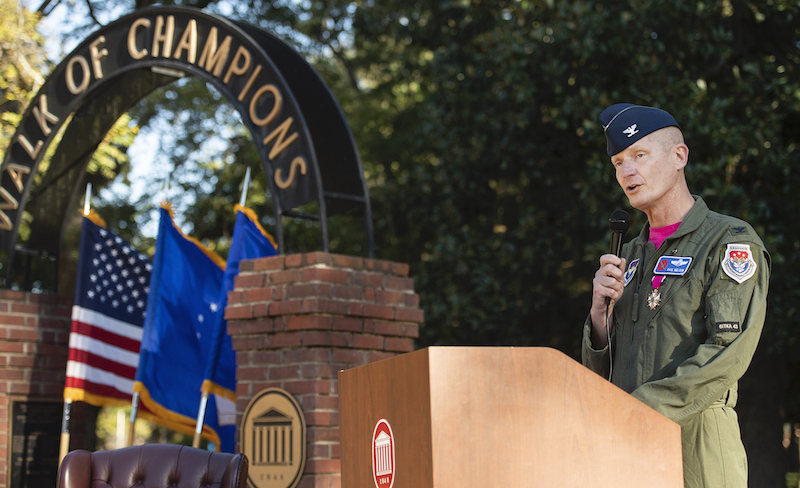 Retired Col. Paul ‘Voodoo’ Nelson speaks about the importance of service and the mentors who helped his career during his retirement ceremony in the Grove. Photo by Logan Kirkland/Ole Miss Digital Imaging Services

In the early days of his retirement, Nelson finds himself reflecting about the way the Oxford community and UM faculty members, specifically within the AFROTC program, put him on the path to public service that has defined his past three decades. Remembering Jerry Lexa and Don Faulkner, two veterans who retired into civilian service as Oxford schoolteachers, Nelson cannot help but feel a duty to find a new service role. Those two men were special mentors to Nelson growing up, he said.

“All these leaders had a service ethic, and they passed it on to kids like me who looked up to them,” he said. “That was the powerful thing growing up in Oxford—the service ethic of our mentors and teachers and coaches and community members.”

More than 20 years after his commissioning, Nelson found himself in southern Afghanistan, caring for 650 wounded Marines. Most of these young men and women were having the worst day in their lives.

It was during that time in 2010, in the depths of the Marjah Offensive, that Nelson received a clipping of Lexa’s obituary.

“When I got that obituary, I felt on some level like I was standing on Jerry’s shoulders,” he said. “I was over there to be a part of his legacy. That stewardship and responsibility helped me get through it.”

As Nelson begins his next life chapter as a civilian back in his hometown, he hopes to be that experienced guide for young people in Oxford—the link between Robertson and Lexa’s generation and Oxford’s next legion of public servants, those who want to go on to be a part of something bigger than themselves, something they never dreamed they could be.

Just because he’s hanging up his flight suit doesn’t mean he’s finished serving. Nelson said he’s not sure what’s next, whether it involves applying his infectious disease experience from the H1N1 crisis to the COVID-19 pandemic, working with veterans on campus, finding a way to mentor young people, or simply practicing medicine in the community.

The one thing he knows for sure is that he wants to pass something on to the next generation of public servants.

This article has been edited and condensed from the original version appearing on the University of Mississippi website.