University of the Cumberlands Collects 21,764 Pounds of Food for Local Pantries 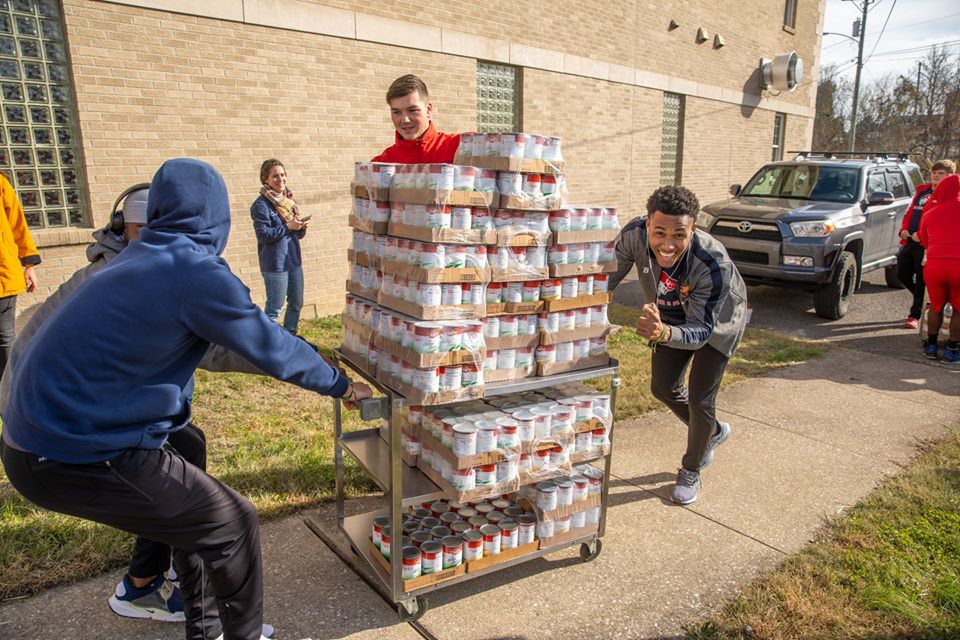 “Getting to make a huge impact on local foodbanks is always an exciting thing to do,” said Emily Coleman, vice president of student services at Cumberlands. “It ties in with our desire to put our faith into action. Besides, it is also really fun!”

Coleman said Cumberlands focused on providing “full, quality meals” for families. Student Services set food-specific campus donation goals each week to help ensure the campus community would donate items that help meet dietary needs. For instance, one week’s goal was green beans, another week was devoted to pasta, and another to canned or dried beans.

Before the annual food drive begins, Student Services always calls food banks in the area to find out which foods they need most. That feedback determines which items Cumberlands focuses on collecting. Norma Dunston, who runs the First Baptist Church food pantry in Williamsburg, Ky., gave an example of this on the day Cumberlands students unloaded the donations at First Baptist.

“I’m watching the green beans and corn come in,” Dunston said, “and we actually didn’t run out of either of those until just this summer from the Cumberlands food drive two years ago. Now, you’re replenishing that. This is so exciting!”

Cumberlands took a multifaceted approach to the food drive. Though they rely in part on donations delivered by the campus community directly to the Office of Student Services, they also collect monetary donations. The Student Services staff then organizes bulk food purchases. On the final day of the food drive, they drove trucks to local grocery stores to pick up more than 3,000 cans of food. Coleman said the office “tries to stretch a dollar the furthest” in these purchases in order to have a bigger impact on food banks.

Around Christmastime, pantries see an increase in the number of families needing food. Especially since many local children receive lunches (and sometimes breakfasts) from their schools, their families need even more food than usual when children are home during Christmas break.

“This food drive is something foodbanks have come to rely on to stock their shelves during these cold months,” Coleman said. “The pantries are always thrilled to have their shelves stocked, which is great, because we’re thrilled to do it!”

Students at Cumberlands get involved in the food drive through donating canned goods or unloading the food on the final day of the drive. The Patriots track and field team worked together at First Baptist Church this year, unloading trucks and stocking shelves.

“I think it’s great to see the behind-the-scenes of this and learn what goes into it. It’s important to give back to the community you’re part of,” said junior runner Lauren McHan.

Alex Kluckhi, an assistant running coach, said the coaches wanted the team to do something to “help out and give back to the community” and said they were “very fortunate” to have the opportunity.

The team definitely stayed busy as the donations poured in. Norma Dunston directed traffic as the students walked in and out, in and out of the church.

“This is so exciting! … And it looks heavy,” Dunston laughed as the athletes hauled large boxes of food into the building. “This is really thrilling. All I can think of is everything I won’t have to order now. Wait,” she said, waving down a student. “Ramen noodles go back there, please, for our backpack ministry.”

She glanced around the room. “We’re not going to have enough space,” she said. “Maybe we should line the rest up along that wall. We’ll make the men’s Sunday school class look at it. It’ll build their character,” she laughed.

This story was edited slightly from the original article on the Cumberlands website.