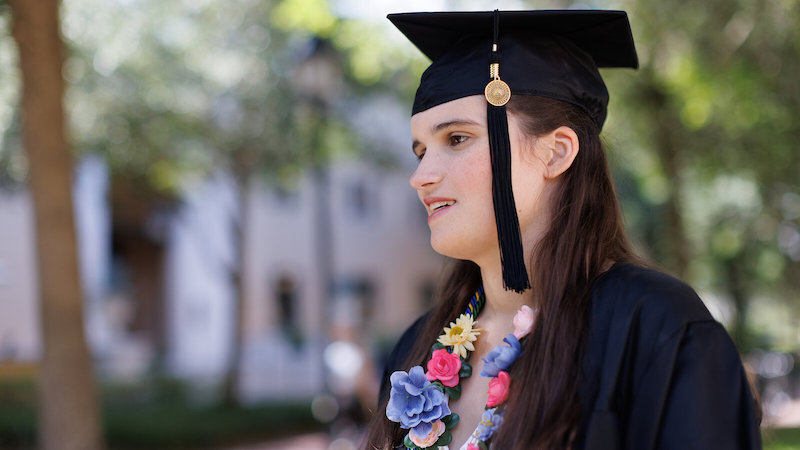 Bonker, who is affected by non-speaking autism, hasn’t spoken since she was 15 months old. She communicates solely by typing and used text-to-speech software to inspire her fellow graduates to serve others, recognize the value in everyone they meet and “be the light.”

“The world,” she told them, can’t wait to see our light shine.”

Bonker is the founder of the nonprofit, Communication 4 ALL, whose mission is to “champion efforts to ensure communication is available to all non-speakers with autism.” She’s a poet, a lyricist and the co-author of the book, “I Am In Here,” which describes her journey as a non-speaking child with autism and how she found her voice without speaking aloud.

That voice rang clear and strong in Bonker’s valedictorian address.

“Today we celebrate our shared achievements,” Bonker said. “I know something about shared achievements because I am affected by a form of autism that doesn’t allow me to speak. My neuromotor issues also prevent me from tying my shoes or buttoning a shirt without assistance. I have typed this speech with one finger with a communication partner holding a keyboard. I am one of the lucky few non-speaking autistics who have been taught to type. That one critical intervention unlocked my mind from its silent cage, enabling me to communicate and to be educated like my hero, Helen Keller.”

“My situation may be extreme,” she added, “but I believe Rollins has shown all of us how sharing gives meaning to life.”

Bonker has “spoken” at many events, including the Autism Society’s Town Hall and an Ashoka Changemakers conference. She has been spotlighted by PBS and TedMed and in the documentary film, “In Our Own Hands: How Patients Are Reinventing Medicine.”

In April, she released two songs from a 10-song album, titled “I Am In Here.” She wrote the lyrics, and the Boston-based band The Bleeding Hearts wrote and performed the music. One of the songs, “Silent Cage,” features guitarist Tom Morello of Rage Against the Machine.

As a changemaker, Bonker is following in the footsteps of another Rollins College hero: Fred Rogers, who received the Algernon Sydney Sullivan Award in 2001. In her speech, she recalled a story about the beloved Mister Rogers. “When he died, a handwritten note was found in his wallet. It said, ‘Life is for service.’ You have probably seen it on the plaque by Strong Hall. Life is for service. So simple, yet so profound.”

Bonker continued: “We are all called to serve, as an everyday act of humility, as a habit of mind. To see the worth in every person we serve. To strive to follow the example of those who chose to share their last crust of bread. For to whom much is given, much is expected.”

“God gave you a voice,” she said. “Use it. And, no, the irony of a non-speaking autistic encouraging you to use your voice is not lost on me. Because if you see the worth in me, then you can see the worth in everyone you meet.”