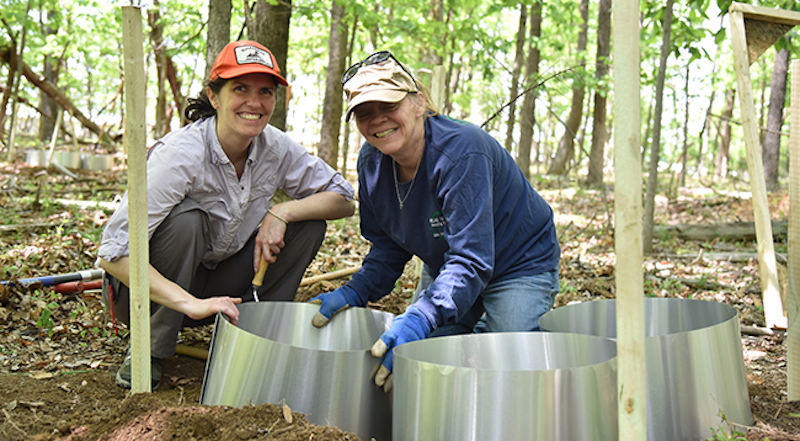 Elizabeth Gleim, an assistant professor of biology and environmental studies at Sullivan Foundation partner school Hollins University, is a disease ecologist. But a lot of people simply know her as the “Tick Lady.”

Gleim’s research centers on the study of zoonotic diseases (those that can be directly transmitted between animals and humans) and vector-borne diseases (infections that require transmission through vectors such as ticks or mosquitoes). Ever since she was pursuing her Ph.D. at the University of Georgia, Gleim, who is also a Hollins alumna (class of 2006), has investigated tick-borne diseases. It’s an especially relevant topic because Southwest Virginia, home to Hollins University, is also a hotspot for Lyme disease. And Gleim and her team of student researchers want to know why.

“There are three main areas on which my research questions focus,” she explained. “The first is identifying ways to better control and prevent tick-borne diseases, especially in the human population but also in domestic animals. I also do a lot of work in vector and disease dynamics, which can vary dramatically based on the ecosystem or the region of the country, and even just from year to year. The other piece is trying to better understand anthropogenic drivers, which is how humans are affecting tick-borne disease risk with their actions or behaviors, and then understanding environmental drivers of disease risk, which can include changes in weather, forest management practices, wildlife population changes and other factors.” 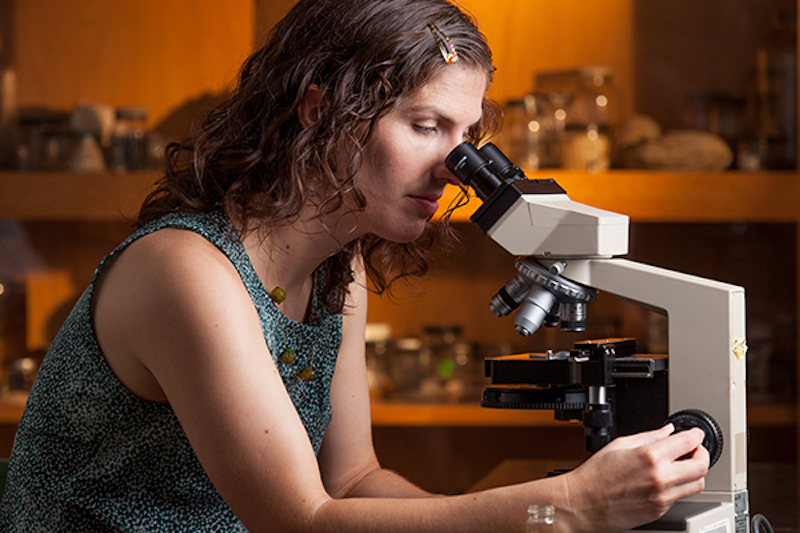 One of Gleim’s major research projects, which was published in the July 10, 2019, edition of Scientific Reports, examined the impact of a process known as “prescribed fire” on the risk of tick-borne disease. Over the past several decades, the emergence and incidence of tick-borne diseases, such as Rocky Mountain spotted fever and Lyme disease, have risen dramatically. The challenge for scientists and disease ecologists has been to find ways to reduce and control tick populations and mitigate the risk of tick-borne disease, especially in humans. For years, prescribed fire has been used to successfully manage forests, grasslands, wetlands and other types of landscapes.

The first phase of Gleim’s research looked at how fire impacts tick abundance and seasonality. The second phase, which she brought to Hollins, focused on whether fire might also affect the pathogens that circulate in the ticks. It was the first study ever done to examine the effects of prescribed fire on tick-borne pathogens themselves. Gleim spent two years doing field work in Southwest Georgia and Northwest Florida.

Along the way, she said, she “collected a whole lot of ticks—50,000 of them. I then tested almost all of those ticks for all known tick-borne pathogens.” She determined that prescribed fire affects some pathogens but not all of them. Furthermore, fire greatly reduced the density of ticks infected with pathogenic bacteria in an area and showed a 98% reduction of encounter rates with infected ticks.

Related: Auburn University and other Sullivan Foundation partner schools are developing rural pharmacies in the Southeast

“The findings here were exciting and promising and led to some interesting questions that I hope I can explore in the years to come,” Gleim said. “First, would we get the same types of dramatic reductions in ticks that we observed if we did this work in other ecosystems or other regions of the country or even the world? Second, could prescribed fire reduce Lyme disease risk specifically? Where I did this work in Georgia and Florida, Lyme is not endemic (e.g. does not occur). It’s at least possible that [prescribed fire] could affect the pathogen that causes Lyme.”

The dynamics of Lyme disease in the United States have evolved considerably over the past two decades. As recently as 2001, Lyme disease cases were seen primarily on a limited basis in New England and the Midwest. However, just 16 years later, Lyme was common everywhere in the Northeast and had begun to spread to other parts of the country.

“By 2017, the western region of Virginia was at the leading edge of what would probably be considered a Lyme endemic area with a distinct hotspot developing in Southwest Virginia,” Gleim said.

Jory Brinkerhoff, a professor at the University of Richmond, collected black-legged tick nymphs, the life stage particularly associated with Lyme cases in humans, at four sites on an east/west gradient across the state. He found the greatest number of nymphs at his western-most site and the highest level of the Lyme pathogen there, but it was just one site. “We all know in science that you can’t draw any firm conclusions from just one place,” Gleim said. Along with Hollins Professor of Biology Morgan Wilson and then-senior Ciera Morris, she set out to understand black-legged tick dynamics in the region, particularly in Southwest Virginia’s hotspot.

For Morris’ senior honors thesis, the team established 12 sites around the Roanoke Valley area to collect ticks on a monthly basis for an entire year. They collaborated with an Old Dominion University tick ecologist, collecting the critters in the eastern part of the state that same year. “We found a significantly higher number of black-legged tick nymphs and larvae in the Roanoke region versus the Norfolk area,” Gleim said. “What’s notable, though, is that we do not have significantly more adults. It seems to indicate that we don’t necessarily have more black-legged ticks in the western portion of the state.” However, they are more forcefully engaging in a particular kind of behavior.

“It turns out ticks don’t jump or fly. The only way they get on a human or animal host is to physically brush up against them. For a tick to get on a host, they crawl up to the tops of vegetation, grass or low-lying plants, and they wait for something to brush up against it. We call that behavior ‘questing.’”

Gleim cited previous studies that demonstrated ticks in the Northeast area quest much more aggressively than those in the Southeast. “Ticks in the Southeast tend to stay down in the leaf litter and therefore are unlikely to come into contact with humans. Thus, a migration of ticks from the north into Virginia via the Appalachian Mountains is a possibility.” 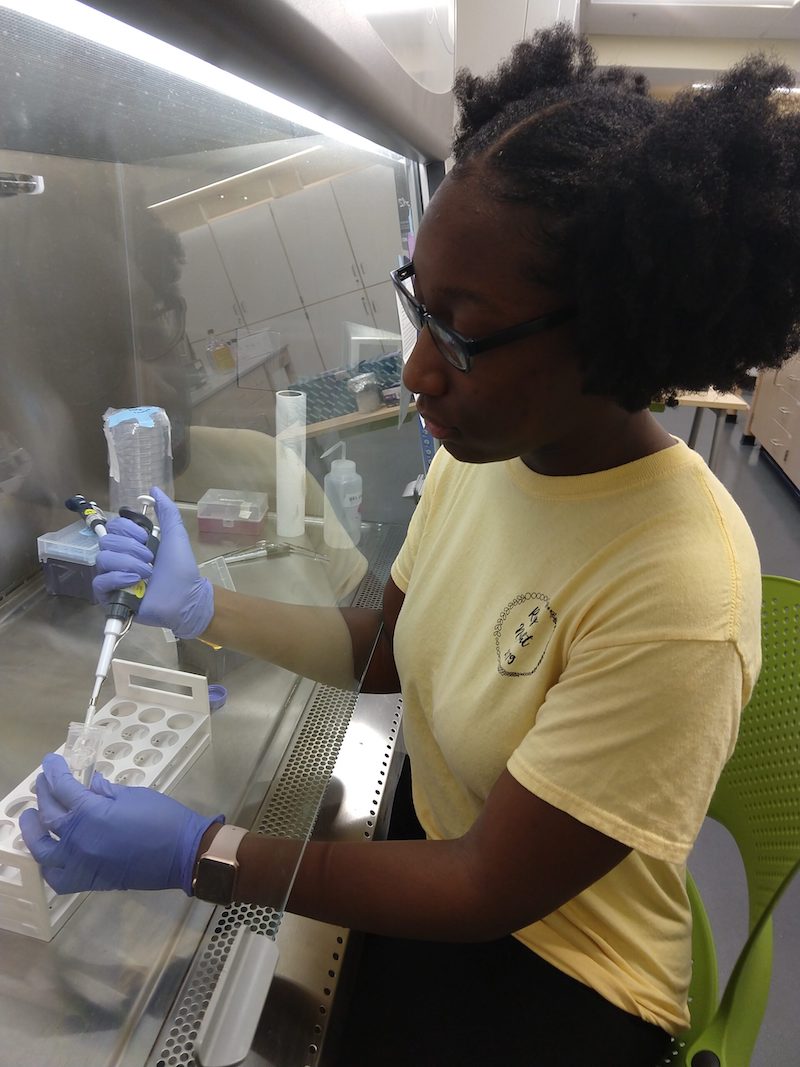 Using some of the groundwork laid by Morris and current student Shravani Chitineni and in collaboration with Gleim, Brinkerhoff and Hollins Professor of Biology Rebecca Beach, Leemu Jackson performed her senior honors thesis last year doing a genetic analysis to compare Roanoke-area black-legged tick populations to those elsewhere in order to verify whether migration was occurring.

“We did what we call a phylogenetic analysis, which is sort of a fancy way of saying we created a family tree of all the different ticks we were testing from Roanoke as well as the state of Virginia and the entire eastern U.S.,” Gleim said. “That analysis compared the DNA sequences of all these ticks and showed how similar those sequences are and thus how related they are to one another. What we discovered was a really high genetic diversity here in the Roanoke area, more so than what we’re seeing in the eastern part of the state. This does not definitively prove that ticks are migrating into Virginia, but it certainly provides some evidence to support that hypothesis.”

Another factor that Gleim believes may be contributing to the prevalence of Lyme disease in the Roanoke Valley involves human dynamics. “In a lot of urban or suburbanized areas, people don’t spend a lot of time outside. But that’s simply not the case here. We have an outdoor-centered lifestyle, so there’s a large number of people who are spending a lot of time outdoors in an ideal tick habitat.”

The “Tick Lady” emphasizes there is still much work to be done. She hopes to submit Morris’ senior thesis for publication in the next month or two. “She’ll be first author on that paper, which is really exciting,” Gleim noted. 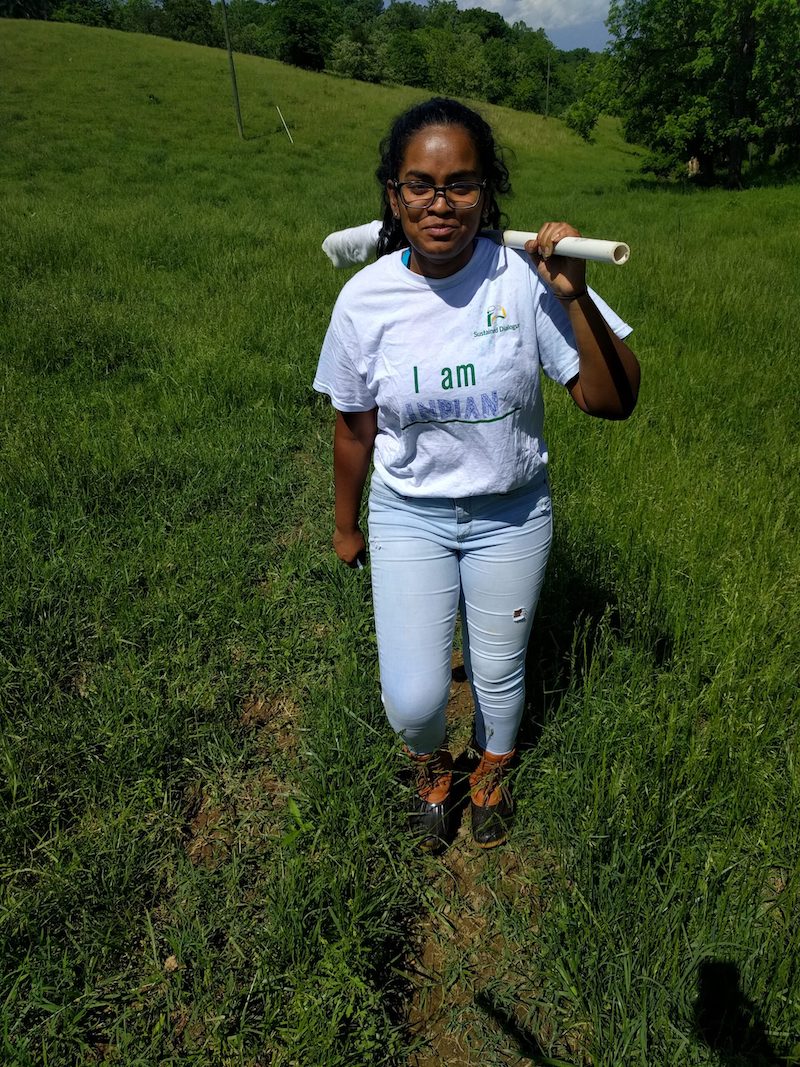 In addition, Gleim said, “Shravani has picked up where Ciera and Leemu have left off—she’s a senior who is doing her thesis with me right now. She’s getting to do what she really loves, biostatistics, and she’s working on a Lyme simulation model with an ecological mathematician at Old Dominion University and myself. We’re examining different control methods that might be used to effectively control Lyme disease risk, particularly in different regions of the country.”

“My hope is that over the next six months or so, we can get published the work that Leemu and Shravani have been doing,” Gleim added. “And down the line, we may begin to examine other tick species and pathogens in addition to further exploring our questing behavior work.”

This article has been edited and condensed from the original version appearing on the Hollins University website.