Elizabeth Rogg: Doing the Most Good 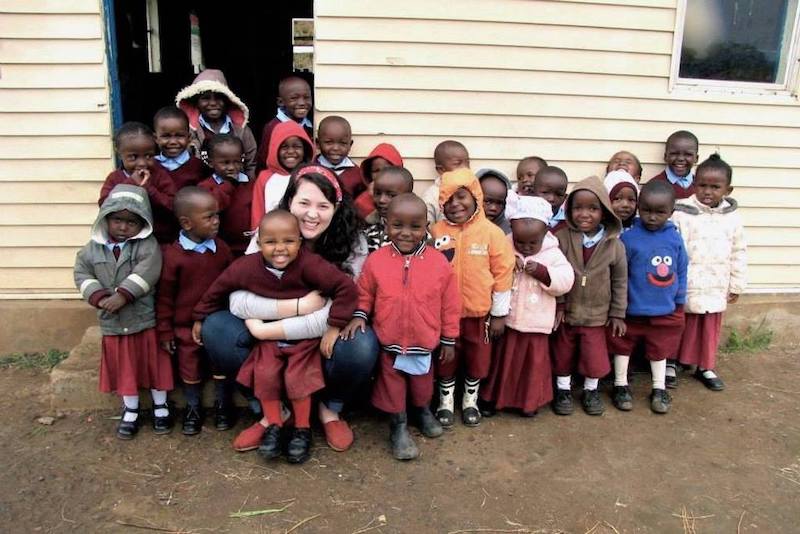 Elizabeth Jensen Rogg, a 2015 Algernon Sydney Sullivan Award recipient, chose Shenandoah University (SU) after touring the Winchester, Va. school and feeling a keen sense of belonging on the small campus tucked away in the Shenandoah Valley. And she discovered her life’s calling as a social worker after several service-based trips sponsored by SU.

The first trip took place after Hurricane Sandy struck New York in 2012. “When they said we’d be cleaning up after a hurricane, I said it was not for me,” recalled Rogg, who now lives in Mineral, Va. with her family. Still, she ended up going on the humanitarian mission due to her relationship with the campus pastor and students involved in the ministry. She and her fellow volunteers spent their spring break cleaning up debris and sleeping away the nights on the floor of a church in Staten Island.

“But I think the one trip that really helped shape me and realize that I belonged in social work was when I went, during the summer after my freshman year, to live in Africa for about two and a half months,” she said.

Rogg found herself working in the Dandora slums of Nairobi, Kenya, teaching three-year-olds how to speak English at the Baptist Children Center. She had first felt drawn to Africa after Twesigye Jackson Kaguri, founder and director of the Nyaka and Kutamba AIDS Orphans Schools in Uganda, spoke to her freshman class at Shenandoah. Kaguri, who grew up in a small Ugandan village, began his speech at SU by breaking a pencil into three parts, illustrating how a single pencil had to be divided and shared between himself, his brother and his sister when they were school children. “I don’t think anyone left that room without feeling something,” Rogg said.

After a quick Google search, Rogg found Buckner International, a Texas-based mission agency. She joined this group of strangers from Texas and trundled off to live in Kenya for a summer. “I went to Africa with the idea that I was going to change the world, but that’s not how it goes,” she said. Faced with the poverty of a developing country, she felt overwhelmed as she realized how much she took for granted as an American, but her desire to be a social worker caught fire. “As a social worker, you have the ability to make a positive impact in someone’s life, and changing that individual’s world is just as important,” she said. 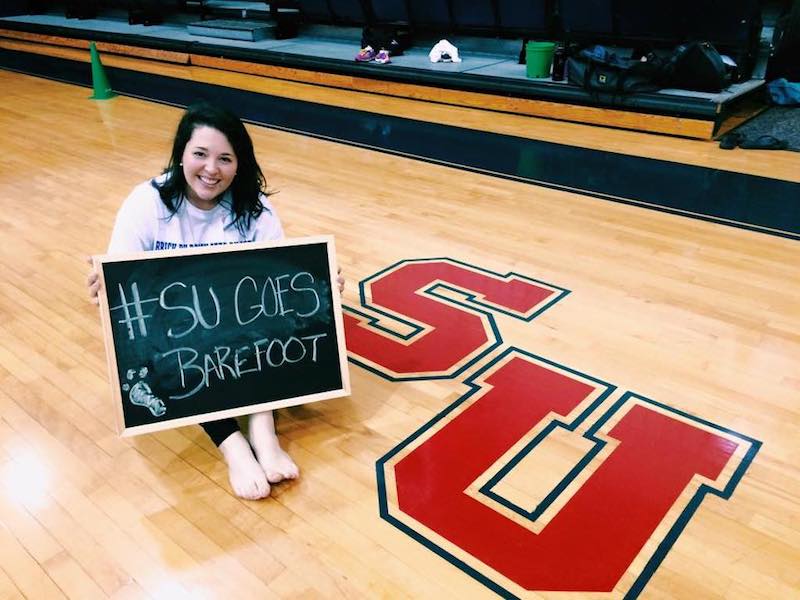 Returning to Shenandoah, Rogg continued to make a positive impact by creating a student-led group called Friends of Nyaka. The group partnered with Kaguri’s nonprofit, Nyaka Global, to organize fundraisers throughout the year to benefit partner schools in Uganda.

For their main annual fundraiser, called the Barefoot Mile, students, staff and community members received financial pledges for each mile they ran barefoot, honoring the great distances that many Ugandan children walk on bare feet to and from school each morning and afternoon.

In addition to running Friends of Nyaka, Rogg was a First Year Seminar Mentor for two years at SU, assisting faculty members by serving as an advisor to first-year students as they transitioned into university life. She also served two years as president of SU’s chapter of the Council for Exceptional Children, a program partnering individuals with local children with disabilities.

“I wasn’t expecting that Shenandoah would have such a positive impact on my life, even in tiny things,” Rogg said. Meanwhile, others were taking notice of the impact Rogg herself was having on SU. Her service-above-self lifestyle was acknowledged by multiple professors and a fellow classmate, a mere acquaintance, when they each nominated Rogg for the Sullivan Award. That fellow student happened to be sitting next to Rogg at SU’s graduation ceremony and gave her a hug when she returned from stage.

Rogg was particularly surprised by the recognition since switching majors had allowed her to graduate a year early—hence, most folks in her graduating class did not know her. “I remember being shocked that my name was called,” she said. “When they were reading my biography, I turned around to my friend and jokingly said, ‘This person does a lot of the same things I do.’” 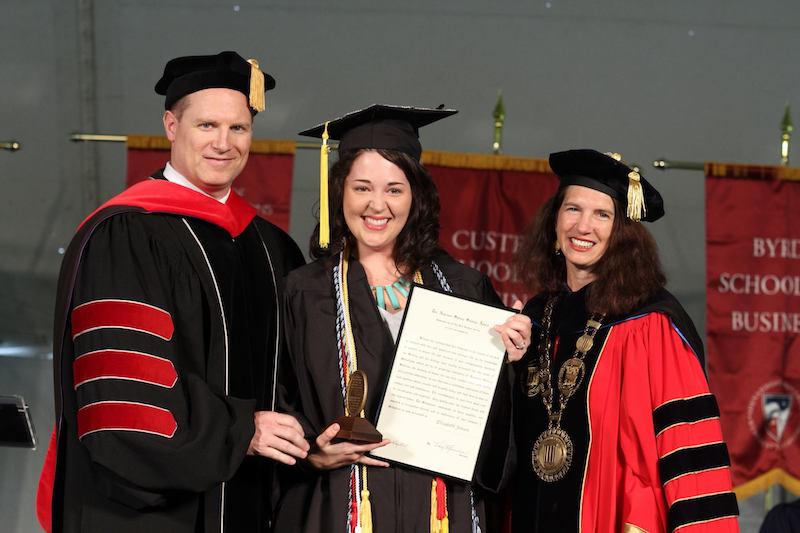 SU President Tracy Fitzsimmons and Dr. Justin Allen presented the award to Rogg. “They are two individuals who inspired me in my academic career, and it was such an honor to be presented this prestigious award by the two of them,” Rogg added.

Beyond academics, Shenandoah’s United Methodist Church Foundation influenced Rogg’s trajectory. “It was where my faith took priority,” she said. “Then my faith played a huge part in me becoming a social worker in the servanthood [tradition].”

Rogg went on to earn her M.S. in social work from the University of Louisville in 2017. She then worked for Salvation Army’s Pathway of Hope for two years in St. Mary’s, Ga. The initiative was launched in 2011 with the main goal of breaking the intergenerational cycle of poverty through strength-based case management, community collaboration and data-driven support.

As a Pathway of Hope program manager, Rogg helped with project planning, including monthly job skill training and family nights, and was a case manager for 30 families. Working to equip so many families for success was daunting, but it taught Rogg to appreciate the little victories of bringing light into someone’s life. It also taught her to humbly trust that any effects that her work had on the parents would positively impact their children as well.

Rogg recalled one family case she dealt with during her two-year stint with the Salvation Army. Referred by the Department of Family Services, the parents’ two children had been recently put in foster care. At the time, Rogg thought, “The reality was that there was no way they’d be getting their children back.”

But from this experience, Rogg learned to never say never. The parents attended every job skills class, individual therapy session, family therapy session and caseworker meeting. They took advantage of every other resource at their disposal. And, about two months after Rogg had resigned from the Salvation Army, the couple called to thank her—they had regained custody of their daughters.

“Those girls would have probably remained in foster care if it wasn’t for our program and its ability to help build up that mom and dad by providing them with the skills they needed to be successful parents and to be there for their daughters,” Rogg said. “It was really special.”

When she first arrived at Shenandoah, Rogg was told, “Do all the good you can, in all the ways you can, to all the souls you can, at all the times you can.” This mantra resurfaced during her tenure at the Salvation Army, whose motto is “Doing the Most Good.”

“It’s just opened my eyes that you can do good anywhere,” Rogg said. “You don’t necessarily have to be in a professional setting to do good.” To continue providing both help and hope for others after leaving the Salvation Army, she has worked at a food pantry, volunteered at her church, helped quarantined community members during Covid-19, and performed her own important daily chores as a parent.

She has been married to Zack Rogg for six years, and they have relocated three times as a military family. After losing their first son, Maddox, she is now a full-time mom to her two-year-old daughter, Madden. “I feel like I lost so many experiences with my son, and I didn’t want to miss them with her, so that was the real driving factor for me staying home with her and not taking for granted the little things,” Rogg said. “The beautiful creature she is helped me heal in ways I’ve never expected.” 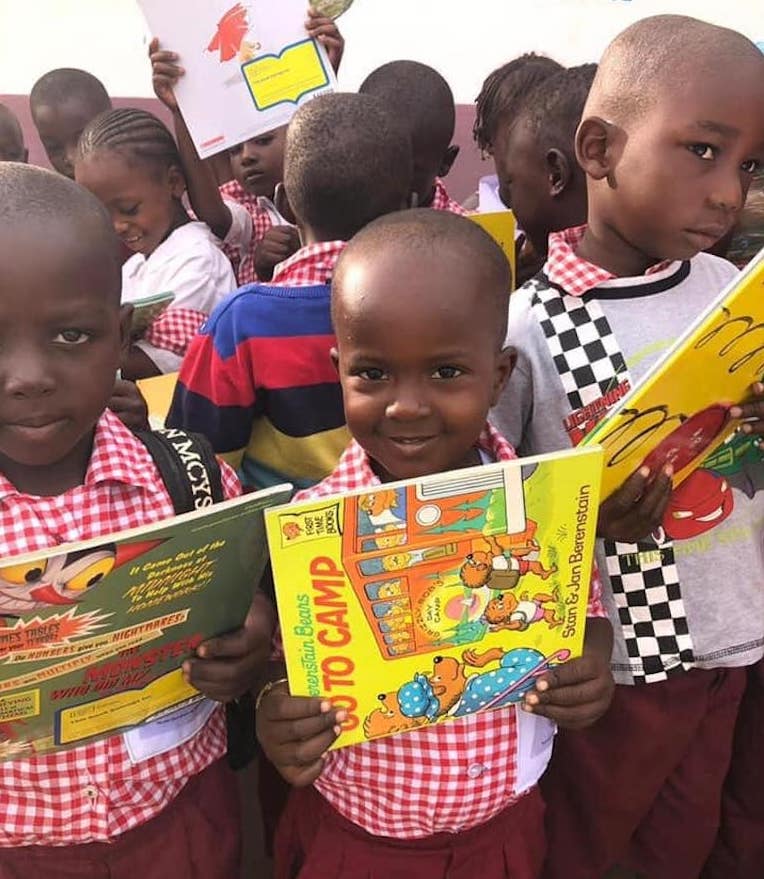 To celebrate Maddox’s birthday each year, the Rogg family has made sure to do something that emphasizes kindness and spreads love. The first year, a stranger donated money to the Sunshine School in Gambia, Africa, paying to erect a gate built in honor of Maddox and a plaque with his name. This past year, they collected books from friends and family to send to the Sunshine School. “To see these children’s faces means the world and honors Maddox in such a special way,” Rogg said.

In her personal life, Rogg continues her mission as a social worker daily—clothing the naked, feeding the hungry, and giving shelter to those in need. Talking to her, one is reminded of a famous quote by St. Teresa of Ávila: “If you want to change the world, go home and love your family.”