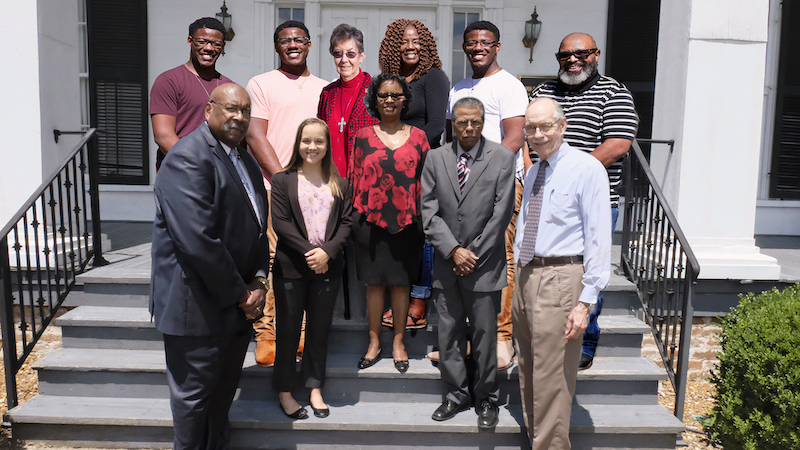 Emma Jones of Sullivan Foundation partner school Furman University knew she came from a place steeped in history. But she didn’t know pieces of that history had been left out.

“There’s a lot of memorials there,” Jones said of Walker County, Georgia, “just not for the man that we lynched.”

It’s been more than two years since Jones first heard the story of 24-year-old Henry White, a Black man who was hung by a white mob in 1916. For two years, she initiated and helped lead an effort to install a memorial to White in the county where he was killed. The memorial was dedicated in September.

Jones grew up in Raleigh, North Carolina, but moved to rural northwest Georgia in high school. She came to Furman to study psychology. She wanted an education that would feed her passion for justice, especially within prison populations.

In summer 2018, Jones took a research internship at Sullivan Foundation partner school Auburn University in eastern Alabama. She worked for the school’s Juvenile Delinquency Laboratory, splitting her time between the lab and a local prison.

During that time, she visited The National Memorial for Peace and Justice and The Legacy Museum, both projects of the Equal Justice Initiative (EJI). The memorial commemorates documented lynchings throughout the United States. That’s when she was surprised to find her own county represented in the display.

Her initial efforts with local officials didn’t generate results, but her luck changed when she reached out to the Walker County Historical Society. Its president, David Boyle, connected Jones with Beverly Foster, president of the Walker County African American Historical and Alumni Association.

Foster was busy compiling a family history, but Jones was persistent.

“Finally, I said, ‘Let me see what this little girl wants—she’s about to wear me to death,’” Foster said, laughing.

Foster sent Jones on a mission to find any existing records of White’s story. Jones used old newspapers, county archives and death records to piece together what happened to White in 1916. The research showed he was found by a mob on the same day that reports had surfaced of an assault on a white woman. Later information suggested White and the woman were in a consensual relationship. Records state that White begged for a proper trial. Instead, he was hung from a tree with a log chain.

Jones represented the Walker County Remembrance Coalition when she signed a contract with EJI, which sponsored the memorial as well as several $1,000 scholarships. The scholarships will be available next year through an essay contest at the county’s two public high schools.

Foster helped recruit eight other people to join her, Doyle and Jones on the coalition, including three other college students. She viewed the older members of the group, including herself, as mentors to the younger ones. 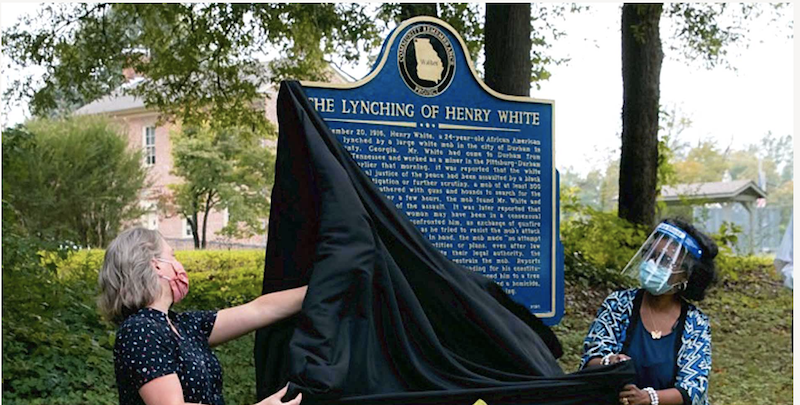 “In 20 years or so, we’re going to retire, and these young people have got to take over for us,” she said.

The coalition focused on education and community awareness. Jones spent a lot time on foot, spreading the word in the community. The work required patience.

“Delicate things like this you have to approach in a delicate way,” Foster said. “We approached it from the standpoint of bringing the community together in a loving situation.”

But it wasn’t enough for Jones to have the county’s Black community behind the project.

“I really need the white people here to know this happened,” she said. “If they’re [members of the Black community] the only people at our ceremony, then we’ve done something wrong.”

She learned that a slower pace is worth it when it allows enough time to engage and involve a broader group. “I probably learned more from working with Beverly than I did from the actual technical work,” Jones said.

The memorial to White, and to the broader story of racial terror, was installed in LaFayette, Georgia, on Sept. 19. Jones is working now in Washington, D.C., for the Capital Fellows program and was unable to travel for the ceremony due to COVID-19 restrictions.

Foster hated that Jones had to miss it. “She got us moving, she got our attention,” Foster said.

Jones’s father delivered her speech on her behalf.

“How was I familiar with the origins of this land, the battles that occurred here, the Civil War officers esteemed and commemorated throughout this town, and yet I did not know about the man who had been lynched here without any acknowledgment of his fundamental American rights to due process?” the speech read, in part.

On the day of the dedication, leaders from all walks of life came to remember White together.

“It is really important to see things and feel passionately about them—and not let it end there,” Jones said. “Acknowledging our history is a really big part of that, but that won’t be the end—that won’t be the fix for us.”

This story has been edited slightly from the original version appearing on the Furman University website.