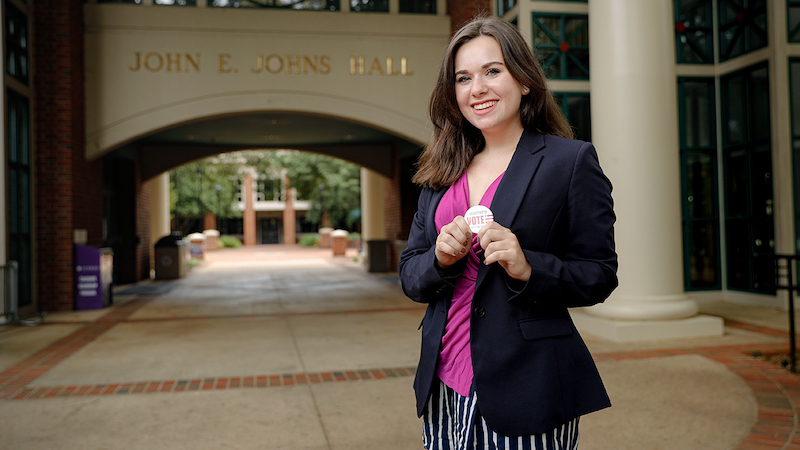 Erica Daly, the incoming student leader of Furman University’s campuswide voter registration and mobilization effort—called Dins Vote—is on a mission to get more than half of the university’s students to vote in the upcoming election.

The good news is that she’s inheriting a campus culture that has increasingly embraced election participation. The bad news is Furman, a Sullivan Foundation partner school, still has a ways to go to match the percentage of college students who cast votes nationally, which provides plenty of motivation for the weeks leading up to Election Day on Nov. 3.

“(We) want to get over 50% of students voting this year,” Daly, a politics and international affairs major from Tega Cay, South Carolina, said. “It’s a general election, and we’re putting all of our best moves forward. We think that’s accomplishable. We’re just going to have to put in the work.”

That work begins in earnest on National Voter Registration Day, which is Tuesday, Sept. 22. Dins Vote will be offering registration assistance from 12:30 to 3 p.m. in front of the Trone Student Center to students who, in many cases, will be old enough to vote for the first time in 2020.

Helping them navigate deadlines, processes and requirements that vary from state to state represents the start of a push over the next few weeks to significantly improve a 30% Furman student voting rate in the last presidential election. Dins Vote has reached out to athletic teams, Greek life organizations and residence halls to organize voter registration question-and-answer sessions and has asked professors to schedule class visits. Daly, a member of the Riley Institute Advance Team, also worked with the Riley Institute at Furman to produce an educational video.

David Fleming, an associate professor of politics and international affairs and Dins Vote’s faculty advisor, notes 30% was a 6% increase over 2012 but still far short of the national average of about 60% turnout for presidential elections since 1900. Young voters in general have a well-earned reputation for being the least likely Americans to actually vote, but if the 2018 midterm is any indication that could be changing. 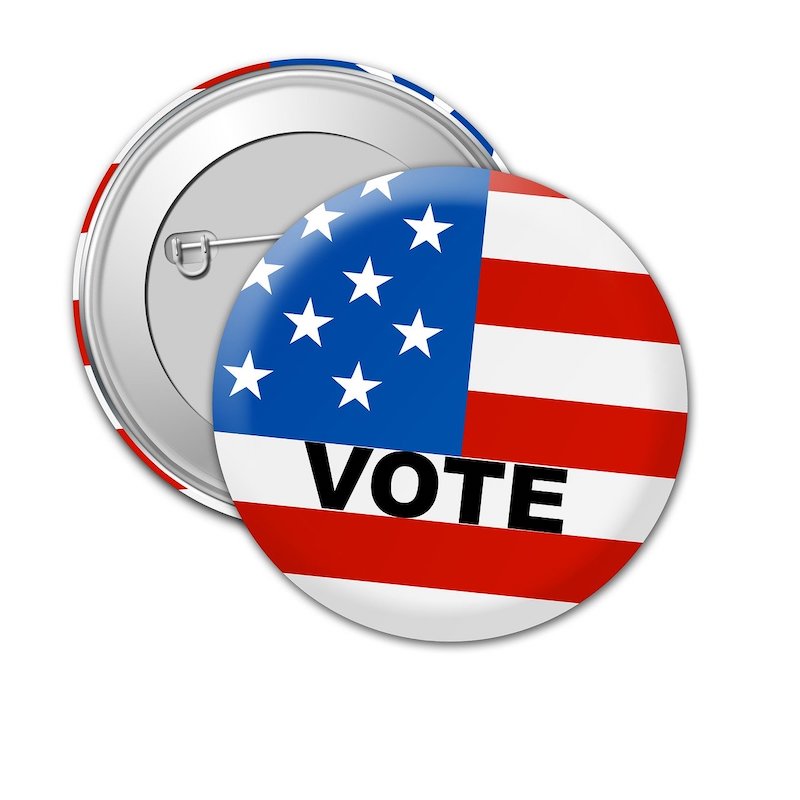 Image by Pete Linforth from Pixabay

According to Census Bureau data, 2014 to 2018 saw an extraordinary 16% jump in the number of citizens ages 18-29 who reported casting ballots, the biggest increase of any age demographic and by far the highest midterm participation by Americans under 30 since at least 1986. Furman nearly tripled the percentage of students who voted compared to 2014.

Daly theorizes young people aren’t educated about the voting process, which is one of the reasons she decided to get involved with Dins Vote. “I had a general civics class in high school, and we learned about how the institutions in American society work. But no one ever taught me (how to vote),” she said. “We see all of our friends posting about all of these issues that we’re passionate about on social media, but still consistently, we are the lowest voting block of any age group … I think that’s because we’re not really given the information about voting and encouraged to register.”

The amount of information is not insignificant. Furman students are eligible to vote either in Greenville, S.C. or in their hometowns but must choose, and they must also decide how they want to cast their ballot—in-person on election day, in-person during an early voting period, or absentee, which can mean mail or simply dropping off an absentee ballot. They must also know whether identification will be required and what kind is acceptable, with those particulars also varying from state to state.

In South Carolina, for example, voters must be registered no later than 30 days prior to the election, which in 2020 is Oct. 2. The state also requires a photo ID to vote but will not accept out-of-state driver’s licenses or college IDs. 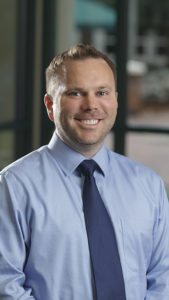 Adding yet another layer of complication is the ongoing COVID-19 pandemic. “Our biggest challenge this year is going to be COVID-19,” Fleming said. “Typically, what’s been the strongest way to motivate students to vote has been peer-to-peer interaction and having a friend or a fellow student helping you register to vote. That type of close community is a lot harder online or in a socially distanced manner.”

The unique demands Greenville County, S.C., made of Furman students before they could register to vote were the impetus for the creation of the Dins Vote student group in 2016. Katherine West, Sulaimon Ahmad and Benjamin Longnecker, Furman students at the time, were plaintiffs in a successful lawsuit challenging the county election commission’s requirement that they complete an 11-question form if they tried to register with a Furman University campus address.

The questionnaire was thrown out, and Fleming said the ruling, combined with the formation of Dins Vote by West, Sulaimon and Longnecker, had an immediate impact on increasing Furman student registration. But, with 70% of those students hailing from out of state, South Carolina’s picture ID law still presents challenges.

Furman was ranked No. 2 for “Most Politically Active Students” in The Princeton Review’s 2021 “The Best 386 Colleges” guide, and Fleming hopes that means students are willing to overcome those hurdles and vote.

“A lot of the students follow the news and are interested in the current debates and politics, but we’ll have to see, when the rubber meets the road, if they are they willing to show up in November,” he said. “I think that they will be, but that’s been kind of a disconnect.”

What isn’t a question is whether or not greater participation would influence election outcomes. In 2016, for example, if ages 18-29 had voted at the same 66.6% rate as the 45-64 demographic, Michigan, Florida and Pennsylvania would have flipped and Hillary Clinton would have defeated Donald Trump.

“Historically, parties target the groups that vote the most, and that traditionally hasn’t been college students,” Fleming said. “So it’s kind of a self-perpetuating system [in which] students are less likely to be targeted and therefore, they’re less likely to vote … We’re trying to push against that. The research in political science shows that voting is a habit, and if you can get students to be politically active in voting soon after they turn 18, that’s something that continues with them throughout their lives.”

This story has been edited slightly from the original version appearing on the Furman University website.