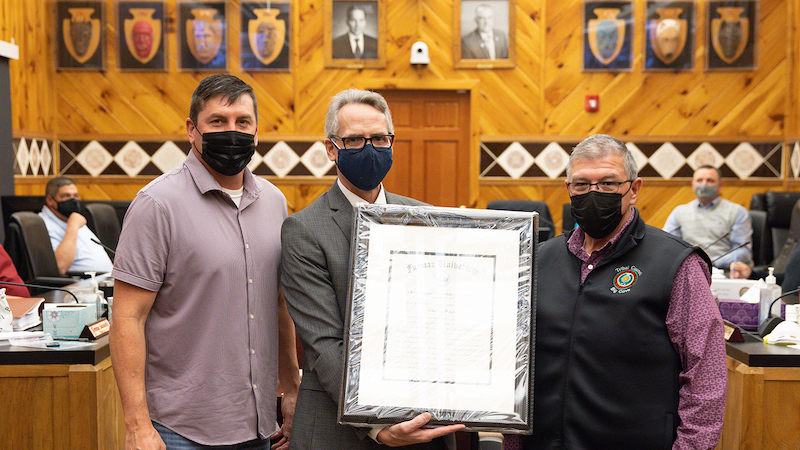 In a recent meeting with the Eastern Band of Cherokee Indians, Sullivan Foundation partner school Furman University formally acknowledged that its campus occupies land that once belonged to the Cherokee and other Indigenous people.

A contingent from the university presented a framed land acknowledgment to representatives of the Eastern Band on Wednesday, Feb. 2.

The in-person presentation, which took place at the Tribal Council House in Cherokee, N.C., was a long time coming. The land acknowledgment was adopted by Furman in November 2019, but COVID-19 precautions caused multiple delays in presenting it to the council.

Ken Peterson, Furman’s provost and vice president for academic affairs, told the council the land acknowledgment would be read on campus at several major events throughout the year. “This will be on the mind of our people on campus—students, faculty and staff—on a regular basis,” he said.

“We hope that, as all land acknowledgments should, this will be the beginning of an ongoing relationship with the Cherokee people that involves the education of our students and the community about Cherokee history and values, as well as the horrific history of colonialism,” Peterson said.

The moment was especially emotional for councilwoman Teresa McCoy. “It’s been a long time since anyone came here to recognize the tribes,” she said. “I’m about to cry.”

Shelby Parker, a 2015 graduate of Furman and the university’s first known Cherokee student, grew up in Cherokee and lives there now. She attended the presentation and told the council how proud she was of her alma mater for making the acknowledgment. “I hope it encourages more Cherokee students or Native American students to attend [Furman],” she said. 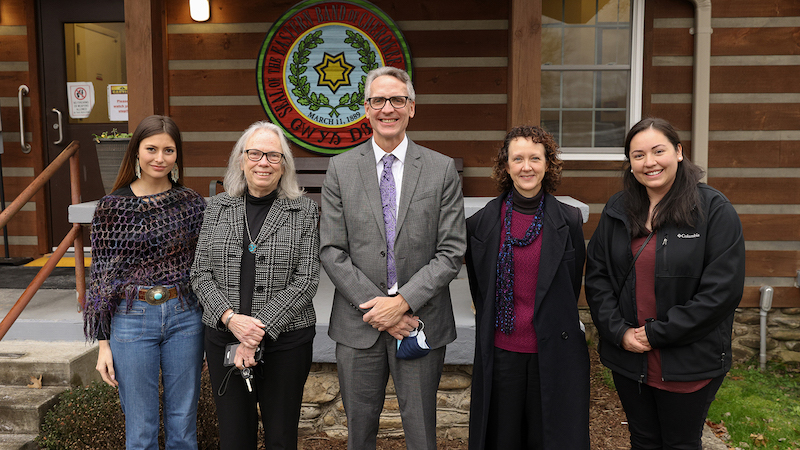 Ahna DeCosty, a current Furman student and member of the Caddo Nation, represented Furman’s Native American and Indigenous Student Association. Decosty and other faculty members brought gifts of Furman mugs for the council members and a Furman cookbook for the Cherokee library.

Furman plans to offer more classes covering Native American subjects. Danielle Vinson, a professor of politics and international affairs, will teach a special topics class in the fall on Native American politics. If it goes well, the class could become a fixture.

Helen Lee Turner, a professor of religion who teaches a May Experience in Arizona on Hopi and Navajo, is developing a course focused on Cherokee. Other classes are in the works, she said, that might lead to a minor in Native American studies.

Turner said it was important that Furman made the trip to Cherokee. “Tribal representatives were very gracious to have come to Furman in 2019, but a land acknowledgement is about what we need to do to address the real concerns of this statement,” she said.

“As educators who work on traditional Cherokee lands, it is especially important for us to use the opportunity we have to inform our students and community about both the atrocities of colonialism and the wisdom of the Cherokee people, a people who have focused on the importance of community over individuality and insisted that future generations be considered in every situation,” Turner added.

Here’s the text of the Land Acknowledgement:

“We acknowledge that Furman University occupies traditional land of the Cherokee People, a land where the Catawba and other Indigenous people might also have found food. Long before our alma mater sang of the mountain river that laves ‘our mother’s’ feet, the Cherokee honored that water, the land through which it flowed, and all the creatures living on the land with them. From the natural world, they also learned to live and form communities of respect. It is with gratitude that we, too, honor the land and the people who have stewarded it through many generations. We also must acknowledge that we benefit from the Cherokee’s loss of land and commit to remembering the human cost of colonialism. This Land Acknowledgment challenges us to learn from the Cherokee people and to draw from their wisdom about community, resilience and the meaning of life which this land nurtured.”

This article has been edited from the original version appearing on the Furman University website.