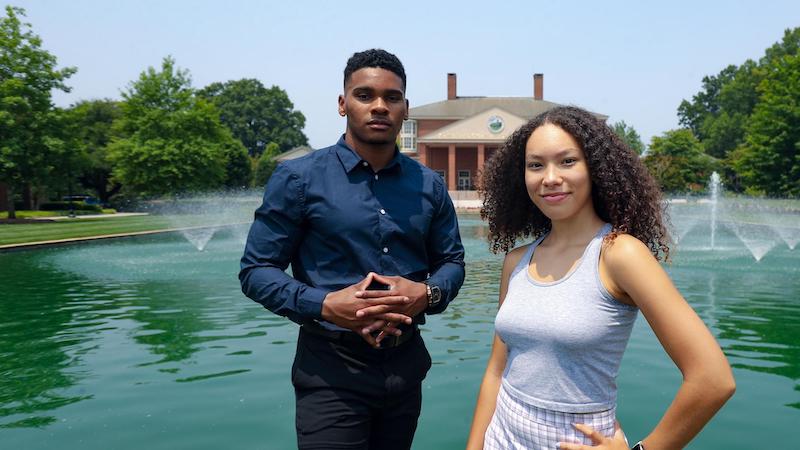 For the first time in its history, Sullivan Foundation partner school Furman University’s current SGA president and vice president are both Black. And both are committed to giving voice to those who often go underrepresented on the campus.

SGA President Asha Marie and Vice President Drew Washington know they’re making history. After all, the university is nearly 200 years old. “Everything worth having takes a while,” Marie said.

Representation—which voices and communities get heard and who has access to power—has been a focus for the two seniors, both in their campaigns and in their campus lives.

“Drew and I are from campus communities that you don’t usually see in positions of power,” Marie said.

Their commitment goes beyond race. Both are working to shine more light on Mosaic, the student organization dedicated to working with the admissions department to recruit multicultural prospective enrollees. Marie wants to make sure marginalized communities, like students of color, low-income students, commuter students and LGBTQIA+ students, have their voices heard. And Washington, a former Paladin football player, would like his fellow athletes, among other groups, to feel empowered.

“Being a student in a leadership position is showing that you can do a lot more things besides playing sports,” Washington said. “Whether you’re in theater, or an athlete, or in Greek life or whatever, you shouldn’t be stuck in one box and confined.”

Marie created her own interdisciplinary major studying advocacy and justice and spent the past summer studying gentrification in her hometown of Greenville, South Carolina. She started her community involvement early. Her high school activism led her to sit on a panel with Michael Jennings, Furman’s chief diversity officer.

“Michael was like, ‘I like this girl,’” Marie recalled. “So he submitted my name for a scholarship, and I won, and it just ended up working.”

At Furman, Marie said she “felt like my voice was valued, but I was also able to represent student concerns that I felt were often not considered or acted on.”

The best way she could further represent those concerns, she decided, was through the SGA. “I thought, ‘Isn’t it funny that the student body president has so much access, but it seems like people aren’t really using that to its full potential,’” she said. “‘Imagine what I could do if I had the access and the intentional relationships with the community and administration.’”

Before she could enter the race, however, Marie had a hurdle to clear: SGA’s constitution said that the student body president had to have previous student government experience—which she didn’t have. (Neither did Washington, who faced no such obstacle in his vice-presidential candidacy.) Her petition to amend the constitution got about 300 signatures, enough to trigger a campuswide referendum on Feb. 10, which passed with a significant majority.

The victory “meant that more students can think of themselves as qualified to serve in these positions,” Marie said. “It seemed to me that a lot of students, especially students of marginalized identities, just couldn’t see themselves in that space.”

Washington was similarly inspired by his campus experiences, including serving as a diversity fellow for Mosaic and participating in several panel talks. His columns on diversity matters for The Paladin student newspaper helped him hone his voice.

“I got a lot of traction from different types of people in the student body, not just students of color,” he said. “That made me feel like my voice has the potential to carry a lot of weight, so I could try to impact change from a higher stance.”

He ran to break down barriers, he said—not just barriers between groups, but those that students impose upon themselves. “I wanted to make people feel like more things were accessible. We need to help each other; we’re all on the same playing field trying to reach our goals.”

After celebrating their election victories in March, Marie and Washington began focusing their priorities on community, inclusion and belonging.

“We’re just brainstorming ways to do a culture shift—some actual system-changing among the student body and how the Furman community feels and works,” said Marie, who will also be the first woman of color to serve as SGA president since 2007.

After graduation, Marie wants to continue her research on public history and how communities tell their stories, and eventually teach on the college level. She wants to teach “really interesting experimental classes that get students to get out in the community and engage outside of academia.”

Washington hopes to begin a career in educational public policy. But his specific plans, like his vision for the student community, remain somewhat “laid back.”

“I always like to go with the flow,” he said. “As long as you work hard and know what you’re doing and have your goals in sight, it’s OK to have things kind of malleable, right?”

This article has been edited from the original version appearing on the Furman University website.