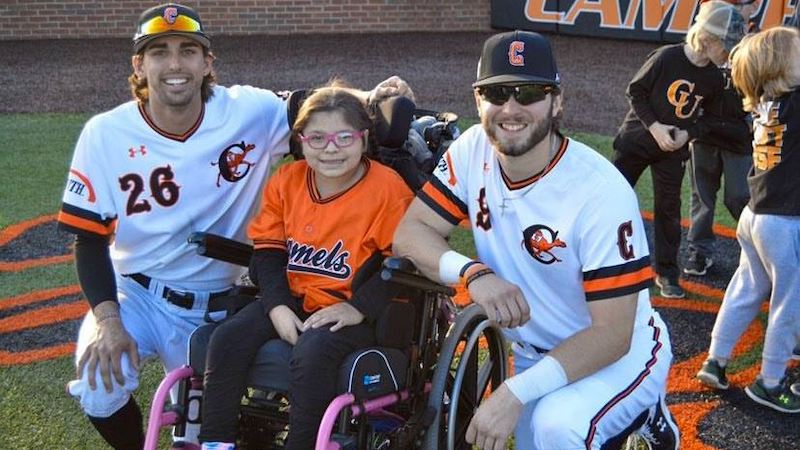 The Fighting Camels of Sullivan Foundation partner school Campbell University didn’t make it to the College World Series this year, but it wasn’t for lack of support from their No. 1 fan: Gabby Hernandez. For the last six years, Gabby Hernandez has rolled up to Jim Perry Stadium in her wheelchair, belting cheers for her team—even while fighting for her life.

“No matter what kind of struggle she’s got going on, she makes sure that she’s here for us,” said Drake Pierson, a first-team All Big South Conference first baseman this year as a redshirt junior. “And we make sure that we are here for her.”

Gabby suffers from a life-threatening genetic disorder on Chromosome 22q, leading to multiple physical ailments, including a severe form of epilepsy called myoclonic-astatic. She has faced brain loss in the form of cerebral atrophy, respiratory failure on a half-dozen occasions and has been diagnosed with several other conditions.

While catching something as simple as the flu could be devastating, you wouldn’t know it by watching the teenager cheer on her team.

“They’re always willing to do whatever is going to make her happy,” her mother, Joann Ayala, said. “It means the world to us, just to give her a chance.”

The relationship dates back to the team’s community service trip to the Miracle League of Johnston County. From the moment Gabby laid eyes on the Fighting Camels in 2016, the connection clicked. By the time the 2018 season rolled along, then-freshman Ty Babin saw her splendid smile across the dugout and made sure to make Gabby feel at home. 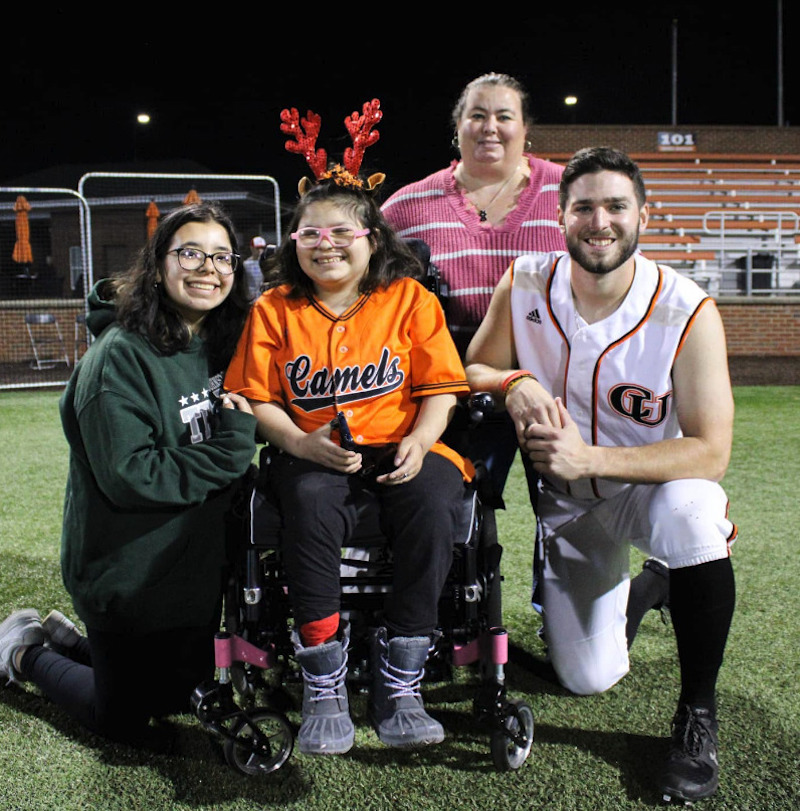 Ty Babin poses for a photo with Gabby Hernandez and her family.

“I tried to talk to her every game and, whenever she was here with her family, [spent] as much time as I could with her, because it was really obvious to see how much she truly cared about Campbell baseball,” Babin said.

His teammates quickly rallied to support Gabby as well. The players sign autographs for her before every game. Many of them say hello to her during the game in the on-deck circle or even on the field, and everyone makes sure to stick around after the game for any photo request Gabby wants.

“Honestly, I just try to put on a show for her,” Pierson said. ”She’s over there smiling and screaming for all of us to say hello, and it’s really nice to see her find happiness through us.”

Gabby’s voice echoes through Jim Perry Stadium. She knows every name on the Campbell roster and is keenly aware of when to cheer. And that unwavering support is deeply appreciated, according to Pierson. “Whatever it is, whether you got a guy in scoring position or whatever, I’m going to get it done,” he said. “I want to make her smile, make her happy.”

Related: Native American commission meets at Campbell University to forge a path to the future

That desire to make Gabby smile hit close to home for Babin. This past December, the fifth-year first-team All-Conference senior organized a Home Run Derby fundraiser at Jim Perry Stadium. Fans paid to get their cuts in and take batting practice on the field, and the event raised more than $4,800 to help pay medical bills for Gabby’s family.

“I’d like to believe these moments give her a drive to keep going and keep fighting because she does have a lot of illnesses, and we don’t know how long she has left,” her mother said.

While Gabby continues to deal with multiple life-threatening diseases, nothing is more sacred to her than time spent with her boys. Following a series win on April 10, Babin and Pierson noticed Gabby watching kids run the bases from her usual perch by the visitors’ dugout. The players acted immediately, pushing Gabby around the bases so she could be a part of the action. 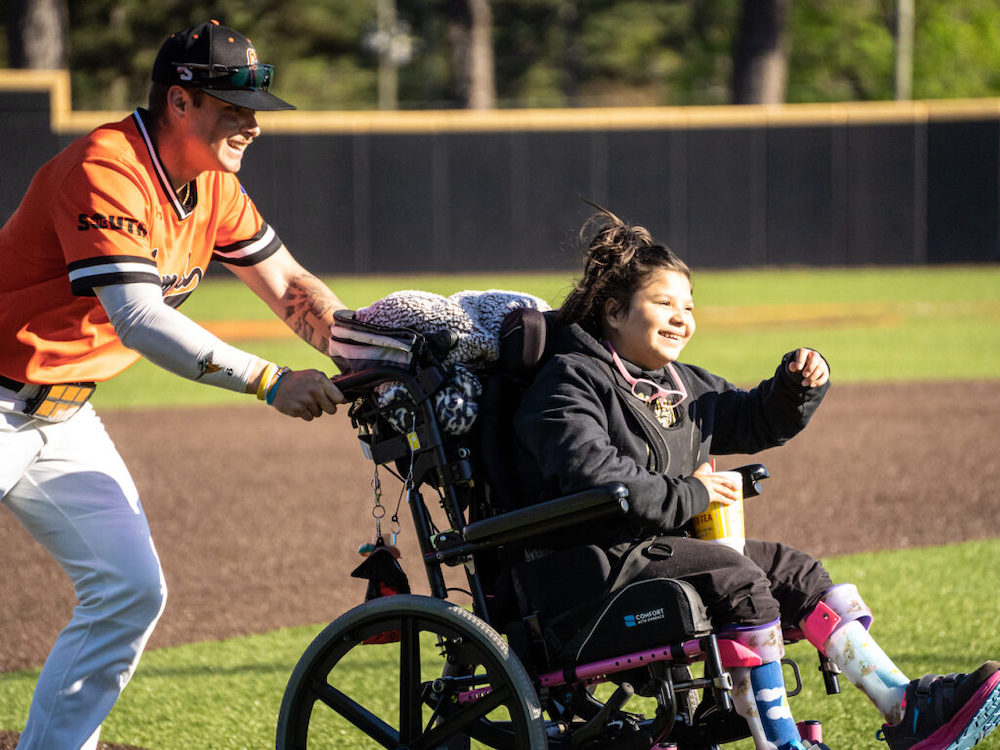 A Fighting Camels player wheels Gabby around the bases at Jim Perry Stadium.

As Gabby rounded third base, rolling toward the plate in her wheelchair, fans in attendance stood in unison and cheered on the Camels’ biggest fan.

“They treat us like family,” said Elizabeth Ayala, Gabby’s older sister. “They take the time out of their day to talk to us and hang out with us, and it just feels like family.”

“It’s really important to me and our guys to make sure she can enjoy her life on a daily basis,” Pierson said. “If we have any small part in that, then then I want to contribute to that.”

Gabby’s latest miracle came from a phone call she received on Memorial Day. Campbell’s baseball team had earned a spot in the NCAA Regionals, and the entire Ayala family was invited to watch the games in Knoxville, Tenn., as special guests of the team.

“Gabby was just so excited about the news, that’s all she would talk about,” Joann said. “We just really appreciate all the love that we get here from everybody.”

This article has been edited and expanded from the original version appearing on the Campbell University website.