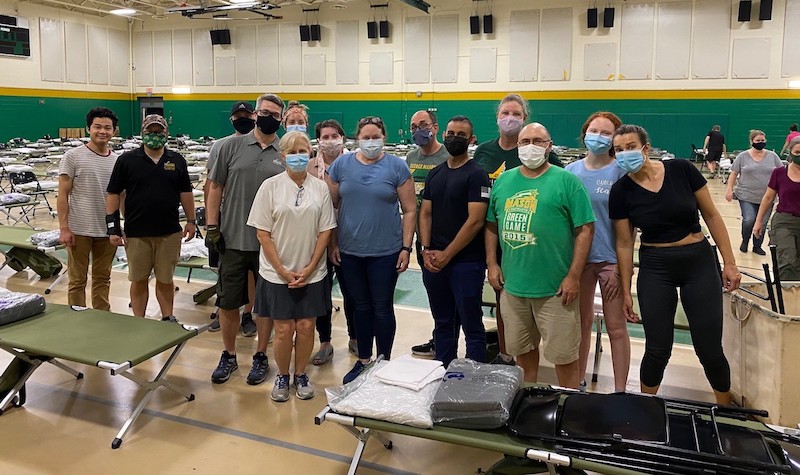 After three tours of duty in Afghanistan as an Army Ranger medic, Keith Jochem said he knows the Afghan people as caring, welcoming and generous.

His wife, Shazia, is from Afghanistan and grew up in Kabul, from where her family fled the Russian invasion in the 1980s.

That is why Jochem, a police lieutenant at Sullivan Foundation partner school George Mason University, jumped at the chance to volunteer to help when a group of 174 Afghan refugees, fleeing the Taliban takeover of their country on a U.S. government flight, sheltered for 24 hours at Northern Virginia Community College’s gym in Annandale, Va., on Aug. 20-21.

“It was heartbreaking,” Jochem said. “You have to put yourselves in their shoes. What if something happened here and you had to gather some of your clothes and documents and your family? You go to a different country, you don’t know the language, you don’t know the culture, you’re thrown into a gym, and that’s it.”

Jochem was one of 29 volunteers with Mason ties who gave of their time at Northern Virginia Community College (NVCC). Volunteers came from the Emergency Operations Group, University Police, the Office of the Provost, Information Technology Services, the Office of Business Services, and the regional campuses.

Dave Farris, executive director of Safety and Emergency Management at Mason, put out the call after Tom Mayhew, his counterpart at NVCC, notified him that the state had activated NVCC as an emergency shelter.

Under the terms of an agreement between the schools and the state, when either Mason or NVCC is activated as a shelter, the other lends a hand.

“It worked out fantastic,” Mayhew said. “We couldn’t have done it without the Mason folks.”

Though NVCC was the lead agency, Farris said Mason’s volunteers pitched in wherever necessary—whether it was setting up 500 cots, managing donations or helping manage the 150 volunteers that showed up, including more than 100 from NVCC and many from the local Afghan community.

“The turnout from the Afghan community was unbelievable, and it absolutely couldn’t have been possible without them,” Farris said.

Mason alum Roya Nasrahti, a communications officer with Mason Police, is part of that community, having come to the United States with her family from Afghanistan when she was young.  “I believe the Afghan volunteers and refugees felt more comfortable speaking with me because I spoke the same language,” said Narahti. “I also felt a sense of trust and assurance between us.”

Farris was sure that comfort was appreciated. “They were extremely tired,” he said of the refugees. “As we walked around initially handing out, food, water and clothing, it was obvious they had been through some terrible events.”

Jochem also speaks some Farsi, and his medical background was valuable. His wife, Shazia, an ER nurse and Mason alum, found a babysitter for their three kids and joined her husband.

For Jochem, seeing the Afghans in distress, including the many children and babies in the group, was jarring.

“Their culture is deep in giving and making sure everyone else is taken care of first before themselves,” he said. “I still have contacts in the military in operations in [Afghanistan] that I spoke with on the phone a couple of days ago. They said what you see on the news is 10 times worse in reality.”

The reality for the refugees was that their travels, after a 13-hour flight from Afghanistan, were not over in Virginia. At 8 p.m. on Aug. 21, the last bus pulled away from NVCC for a ride to the Dulles Expo Center, where the refugees waited for a flight to Texas and processing.

“I know they’ve been through a lot,” Nasrahti said of the refugees. “The people have been extremely traumatized. We opened our doors and hearts to let them in and keep them safe.”

This article has been edited slightly from the original version appearing on the George Mason University website.