It’s often difficult for children to sleep on the night of Christmas Eve, but it’s even harder for those who don’t have beds to sleep in—a problem that’s more common than you might think.

Mountain Outreach (MO), a ministry hosted by Sullivan Foundation partner school University of the Cumberlands, is teaming up with the B Squad Project, a Williamsburg, Ky. nonprofit, to make Christmas a little more magical—and restful—for those underprivileged children in the local community.

Each year since 2018, the B Squad has identified children who do not have beds and provided them with brand-new beds at Christmastime. This year, MO was able to provide funds and labor for 30 beds for the B Squad—a $3,600 donation. Construction on the beds is already underway.

The bed giveaway is part of an initiative the B Squad calls “Gutsy Gunner’s Sweet Dreams,” named in honor of Gunner Bowlin, a local boy. Even though Gunner has total intestinal aganglionosis, an extreme and rare form of Hirschsprung’s disease, and short bowel syndrome, he is always smiling and bringing joy to those around him. Hirschsprung’s disease is a condition that affects the large intestine (colon) and causes serious problems with bowel movements.

“The Sweet Dreams event is our favorite!” said Carol Smith, Gunner’s mom and a B Squad member. “The look on those children’s faces and the appreciation you see from the parents is priceless. Gunner loves the bed giveaway. He tells everyone he meets about it. Last year, he even helped paint some of the beds.” 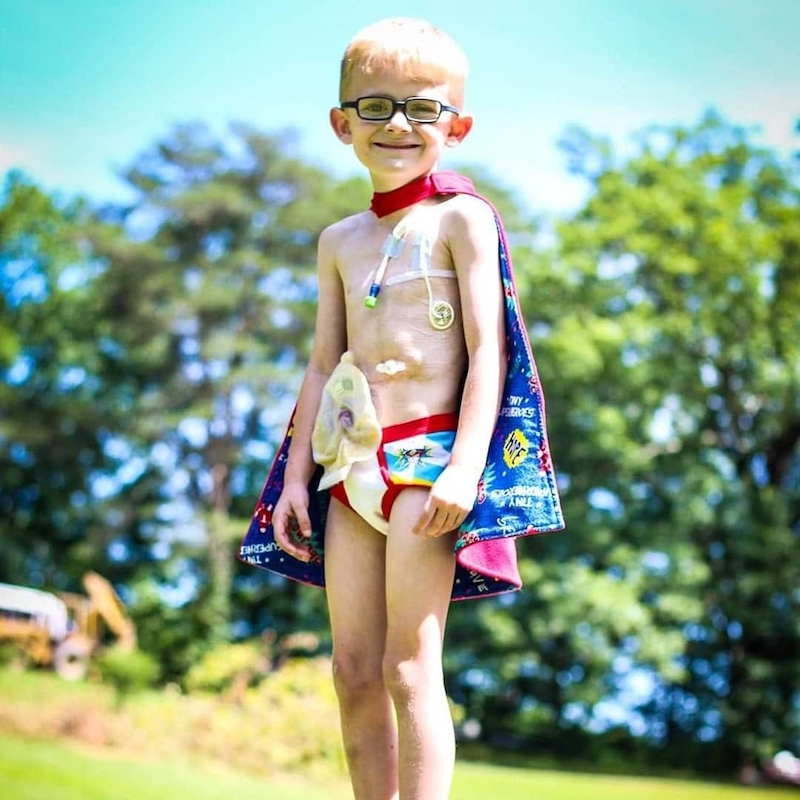 Gunner Bowlin, who inspired Gutsy Gunner’s Sweet Dreams, is a superhero in his own right.

Gunner spent four months in the hospital after he was born due to his health conditions. During that time, the community rallied around his family, praying for them and providing them with whatever support they needed. When the opportunity came for the family to be part of the B Squad’s efforts, Smith knew “without a doubt” that she wanted to “give back to the community that helped my family so much.”

“The first year we did it, people said we were crazy,” said Shannon Barman, who created the B Squad Project in 2018. “Nobody knew there was a need for beds. The second year, we had a list of kids waiting for us.”

Related: University of the Cumberlands’ board games drive brightens lives of homeless youths

The beds are branded with the words “Psalm 139:13-14” in memory of Barman’s grandmother, a devout Christian. Those verses read: “For you formed my inward parts; you knitted me together in my mother’s womb. I praise you, for I am fearfully and wonderfully made. Wonderful are your works; my soul knows it very well.”

Barman said that kind of message would have been just what her grandmother wanted kids to remember.

Along with the new beds, the B Squad provides a new mattress, sheets, pillows, blankets and other presents, all of which they give to the children just before Christmas.

This is the third year the B Squad has hosted Gutsy Gunner’s Sweet Dreams. Including the 30 beds this year, the nonprofit will have given away 110 beds to children in Whitley County, Kentucky.

In 2018, Gutsy Gunner’s Sweet Dreams blessed 25 children with new beds, paying more than $300 for each bed to be constructed. Unable to continue paying that much, the B Squad approached MO in 2019 for help. The student volunteers at MO researched, designed and developed a construction plan for a sturdy twin bed that could be assembled easily and bunked if needed. And each bed could be built for approximately one-fourth of the 2018 cost. These savings allowed the B Squad to more than double the number of children they were able to give beds to in 2019. This year, not only is MO building the beds, they are funding them as well.

“We are very thankful to the Lord Jesus that He has provided a way for us to build and fund these beds for the B Squad Project,” said MO Director Rocky Brown. “For us, it is another avenue to help folks in need in our community and share the love of God with them. Additionally, in the process, we get to work with our work-study students and teach them how to provide the absolute best quality work we can.”

“I cannot express my gratitude for MO. They have been amazing,” Barman said. “The beds are a brand-new design from last year, and we are absolutely in love with it. They added a bookshelf to the side so kids can step up into the beds easily if they’re bunked. We love it.” 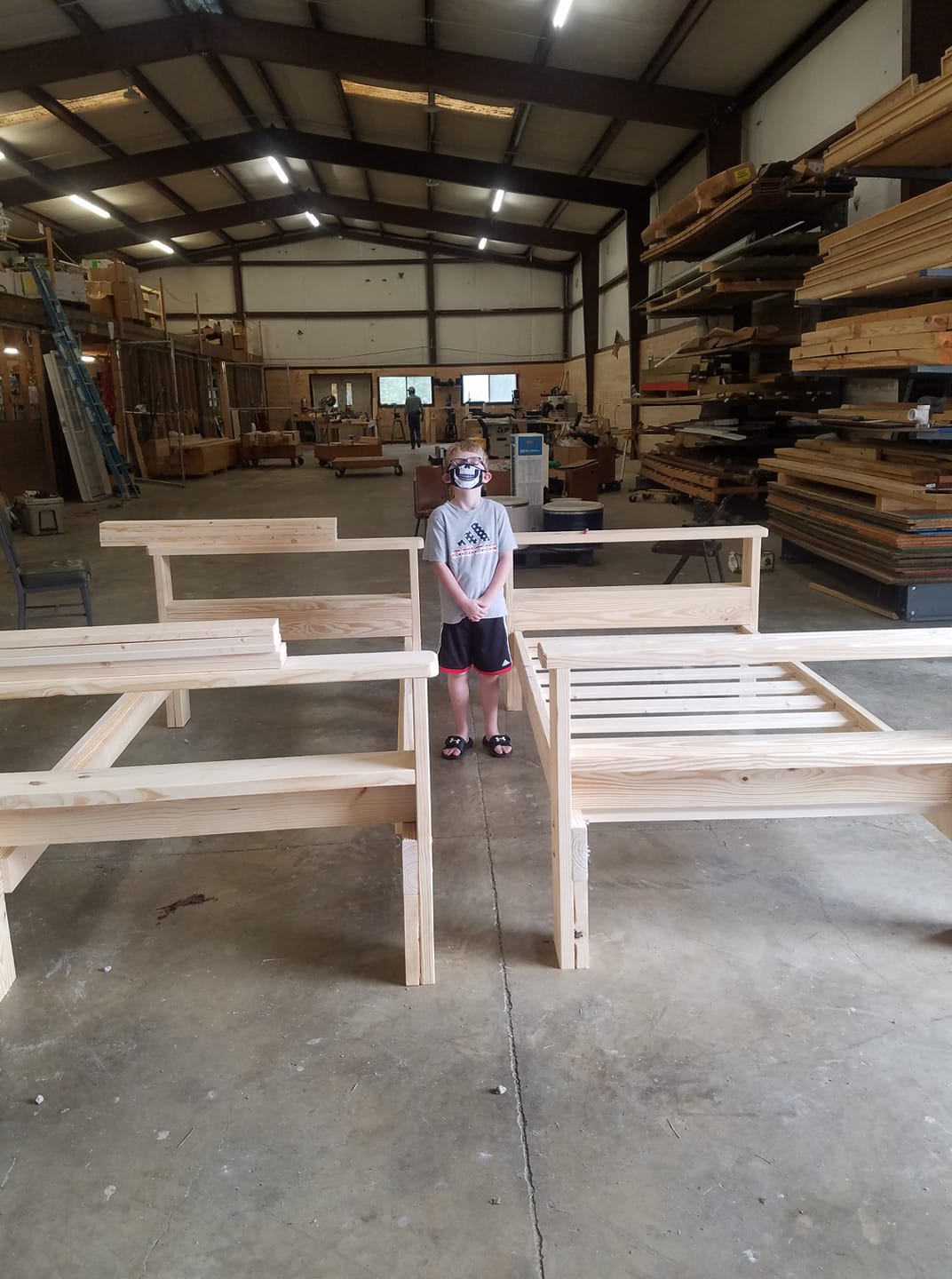 The B Squad Project has built more than 100 beds for children in need since it was formed in 2018.

Construction has already begun on the beds for this Christmas season, starting in mid-October when Barman got a call from a family whose house had been condemned. The family needed to move out, but their two children would have nothing to sleep on. Barman called Brown and explained the situation. Before long, MO had two beds built and ready to go.

Barman mentioned that it’s been tough to bring in donations for any projects this year, since most of the B Squad’s fundraising efforts were going to be in-person events. Due to the pandemic, those events were canceled.

“Some of our children and friends have health issues, so even though we wanted to be able to raise funds, we had to be smart for our families and for our community and play it safe,” Barman said. “This year has been nuts, but we’re still trying to make things work. We want to help kids in our area.”

MO is supplying the beds, which is a huge help to the B Squad; however, the non-profit still needs mattresses for the beds and new pillows and bedding. They have created a wish list on Amazon from which people can purchase items. (View the wish list at https://amzn.to/3oycWNV.) Anyone can also donate to the program by using the PayPal link www.paypal.me/thebsquadproject or sending donations to P.O. Box 43 in Williamsburg, Kentucky.

This article has been edited from the original version appearing on the University of the Cumberlands website.