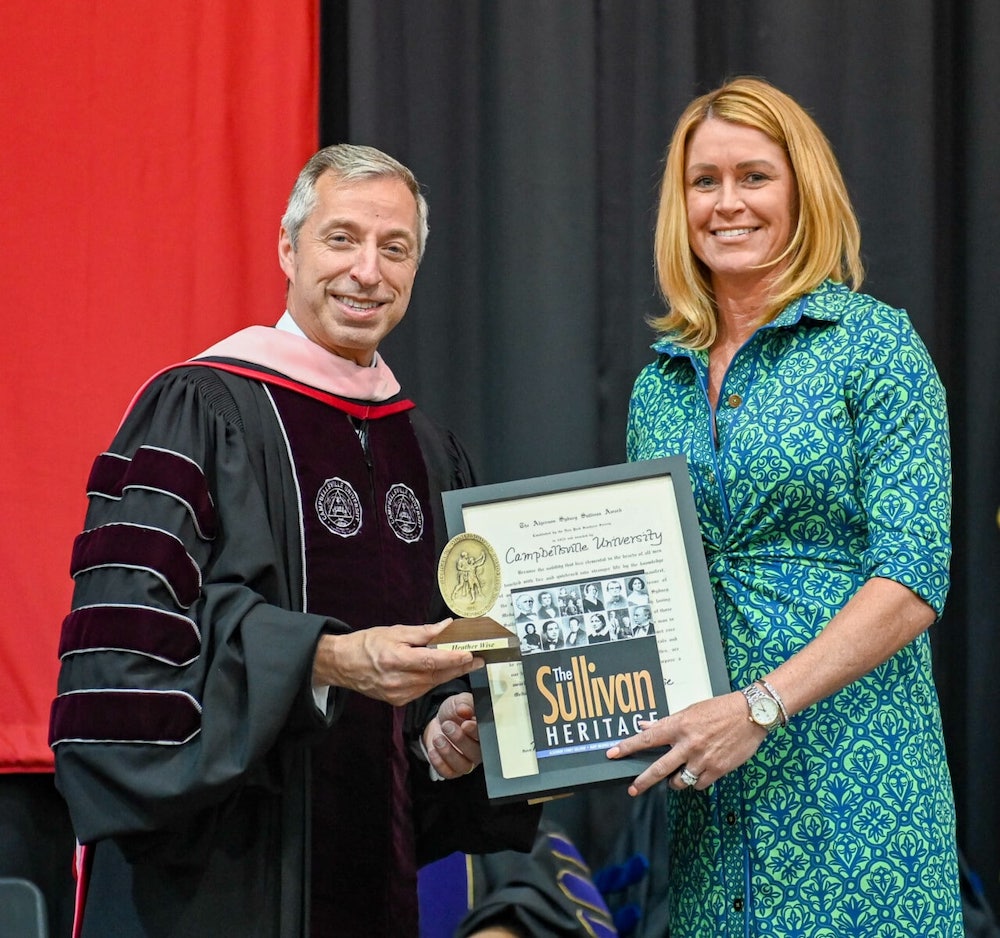 When Dr. Heather Hood Wise, owner of Wise Dentistry for Kids in Campbellsville, Ky., isn’t filling cavities, she’s meeting the spiritual needs of people in her church and making Campbellsville a better place to live. For her service to others, she received the 2022 Algernon Sydney Sullivan Award for community members from Campbellsville University in early May.

In addition to Wise, the award was also presented to graduating senior Madison Sheppard of London, Ky., a four-year player on CU’s women’s basketball team.

CU President Dr. Joseph Hopkins and Dr. Donna Hedgepath, provost and vice president for academic affairs, presented the award to Wise at the university’s commencement ceremony on May 7. Campbellsville University has been providing the Sullivan Award to students and community members since 2002.

“Wise is heavily invested in her community, church and family,” Hopkins said.

Wise has served as a eucharistic minister and religious education teacher at Our Lady of Perpetual Help Catholic Church. She’s also a seven-year school board member at the Kentucky Christian Academy, an eight-year Taylor County Middle and High School Site-Based Decision Making Council member, a previous Campbellsville Chamber of Commerce board member, and an advisory board member with Lake Cumberland Head Start.

She has served on Kentucky Medicaid’s Dental Technical Advisory Council as well as a member of the Medicaid Avesis Advisory Council. Wise also holds a volunteer faculty appointment with the University of Kentucky College of Dentistry. She opened her dentistry practice as a solo practitioner in 2007.

Wise attended Georgetown College from 1996 to 1999, where she played women’s basketball. In 1999, she transferred to Campbellsville University to finish her academic and athletic career and played basketball for her future mother-in-law, Coach Donna Wise.

This article has been edited from the original version appearing on the Campbellsville University website.