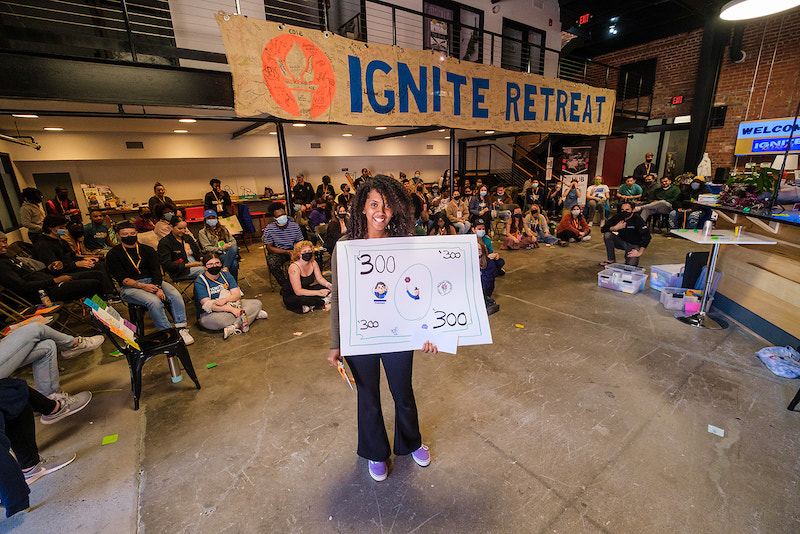 From tales of hamburger-loving dinosaurs and cats with crooked tails to “A Frog Ate My Sandwich” and “How to Catch a Mermaid,” there’s no shortage of quirky, colorful books for American tots and toddlers. Not so in Ethiopia, an African nation of 115 million, where nearly half of the population can’t read or write.

Hebron Mekuria, a sophomore majoring in engineering at Eastern Mennonite University, wants to change that. And her idea and presentation for a social impact business addressing the problem won 1st prize in the pitch competition at the Sullivan Foundation’s Spring 2022 Ignite Retreat, held April 1-3 in Staunton, Va.

For Mekuria, literacy in Ethiopia is a personal issue—that’s her native country. For her part, she’s not only highly literate, she’s also a published poet and has served as copy editor for several school papers. She’s even learning French. But Mekuria knows that illiteracy and poverty are inextricably linked, which means many Ethiopian children face an uphill struggle to overcome the difficult circumstances into which they’re born.

Mekuria’s passion for helping the people of her native country made a big impression on her fellow Ignite Retreat attendees and helped her capture the $300 top prize in the event’s pitch contest. “We love working with students like Hebron who are actively making a difference in their communities,” said Spud Marshall, the Sullivan Foundation’s director of student engagement and leader of the retreat. “Her peers selected her project to receive funding to take the next step and bring her idea to life! We are thrilled to offer her both financial support and mentorship as she gets started.”

Ethiopia is a nation with a rich cultural history, a land where great civilizations flourished and mighty kings ruled over vital trading routes that linked the Roman Empire to the Middle East and India. Today, the country is mired in poverty and subjected to massive droughts and other natural disasters, but it’s fighting its way back to global prominence and boasts one of the fastest-growing economies in the world, according to the Borgen Project.

Early education will be key to Ethiopia’s future, and Mekuria wants to make sure young children there have access to the same kind of reading materials that many American kids take for granted. It’s an idea she has been mulling over for a long time, she said.

“Many toddlers and preschoolers in America, as I’ve observed, have little picture books and board books that help them practice reading and develop an early reading culture,” she said. “From my conversations with other folks, many said that these resources were available to them in their mother tongue growing up. This isn’t a privilege that kids in Ethiopia, my home country, have.” 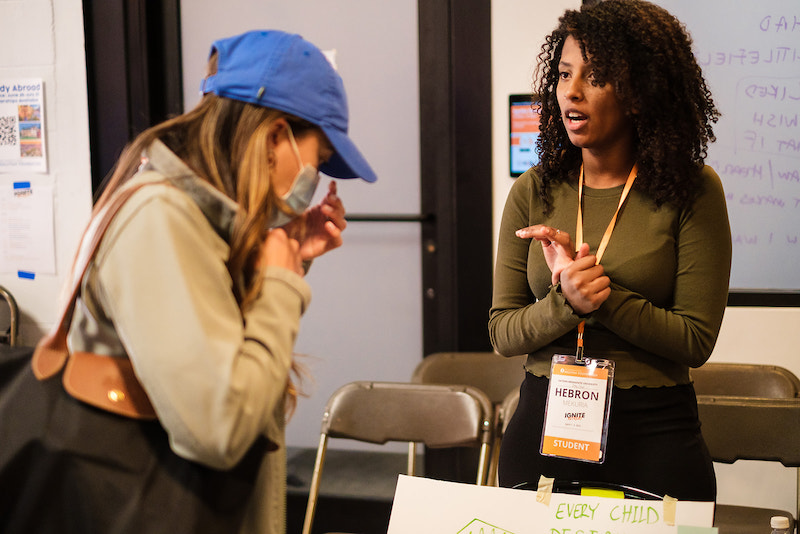 At the Ignite Retreat, Mekuria pitched an idea for a company that creates reading resources for Ethiopian preschoolers, specifically in the Amharic language. “Although there are 80-plus different languages in Ethiopia that all share this problem, Amharic is my first tongue and the country’s working language, and I would love to combat this issue from a place of familiarity,” she said.

If anyone can do that, it’s Mekuria. She’s a 2020 Yoder/Webb scholar and honors program student at EMU who dedicates much of her free time to helping children. The service-minded changemaker has tutored kids, volunteered at orphanages and led Sunday school classes, according to an article on the EMU website. She is particularly interested in kids’ emotional, social and psychological needs. “Right now, caretakers focus much on the physical needs of children and do not realize how much power they have to also shape the minds of their children,” she said in that article.

During the three-day Ignite Retreat, Mekuria attended two different tracks focused on social entrepreneurship: the Project Track on Saturday morning and the Problem Track that afternoon. “I felt like I got different things out of them,” she said. “The Project Track session was helpful in letting me identify what aspects were important in my business. For example, I identified how important customers and a venue were. The Problem Track … was really helpful in teaching me how to look for team members and what to look for.”

The retreat also put her in touch with more than 100 fellow changemakers from colleges and universities across the American South, all of whom share one ambitious goal: to build a better world. Folks like that aren’t easy to meet in everyday life, Mekuria noted. “Often, visionaries might find themselves in communities that don’t appreciate their drive and their dreams. Most college students feel uncomfortable around those who are angsty to challenge the status quo and to change the world. I have a feeling that Ignite was filled with many of these students who were excited and confident about changing the world in one aspect or another. Because of this like-mindedness, Ignite felt like such a safe space to verbalize our dreams, our plans and our grand goals that we know we can achieve but nobody else might have believed in in our regular setting.”

“I felt like that was the kind of environment that would nudge out the best in anyone and help students not be scared of their big dreams,” she added. “I really have no words for how much validation and bravery the retreat gave me to go after my dreams.”

Mekuria said she hopes to return for the next retreat, taking place October 7-9 in Asheville, N.C. “I absolutely want to come back for the next one!” she said. “I want to grow my ideas more and feel empowered and motivated. Next year, though, you best believe that I will bring a van full of friends with me!”