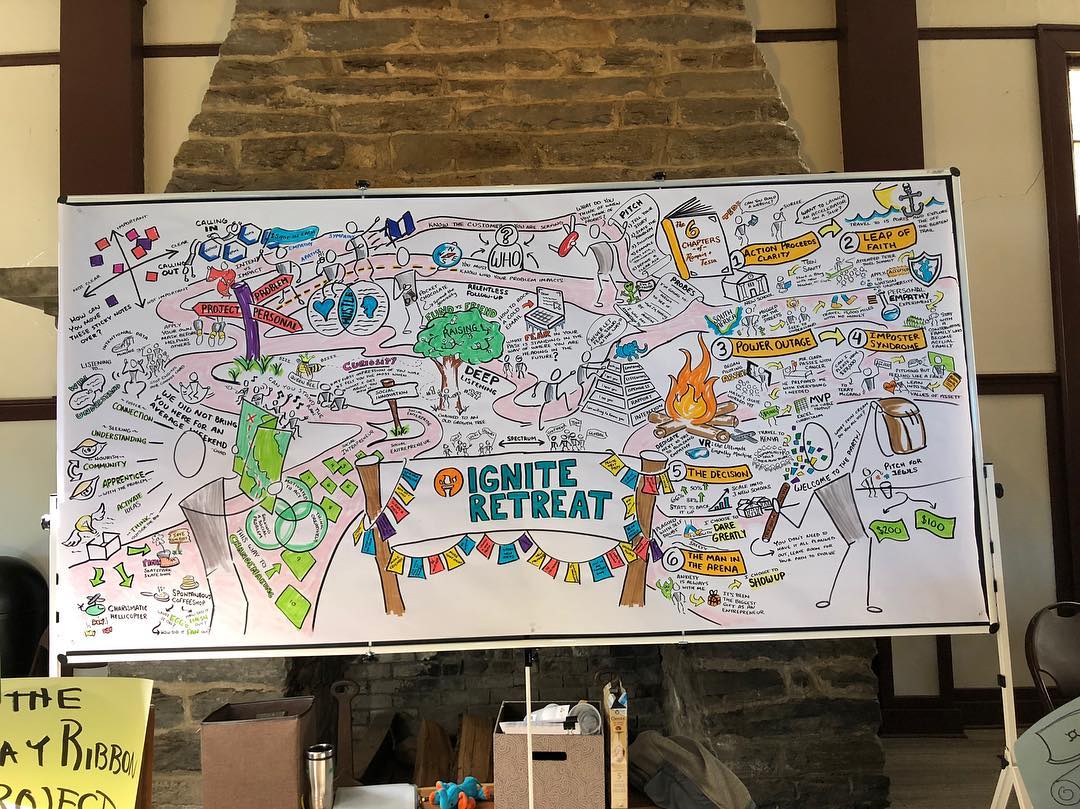 This weekend, ninety-four students and a couple of dozen faculty came together in Black Mountain, North Carolina for a weekend of inspiration, learning, and discussion about social change. We had six facilitators, three tracks for students to choose from, and about forty-eight hours dedicated to exploring how to save the world.

These numbers are a good way to get a handle on what happened this weekend, but they don’t begin to show how powerful the weekend was. The 2018 Ignite Retreat was an event to be remembered.

Friday night, we gathered in Eureka Hall (a fitting name, all things considered), most of us coming off a long day of travel. Students sat with friends from their schools, and nobody really knew what to expect from the weekend. Chad Littlefield kicked things off with a resounding, “What’s up,” Spud started drawing, and the retreat got off to a roaring start.

As you might expect at an event like this, the first part of the evening was dedicated to ice breakers. As you might not expect, these ice breakers involved talking about what defines us as people and what the students hoped to gain from the weekend. They formed bonds and found partners for the weekend and connected faster than you’d think possible for a group that had been together for less than an hour.

Chad threw out cards he created to help people connect, and students raced to grab them and start high-fiving other students. They “bumped” issues they cared about to the top of a lineup, and they talked about how they felt about those issues. The evening wrapped up with a bonfire, and we all headed to bed.

As we mentioned, there were three tracks that the students could choose from: the personal track, the problems track, and the project track. After morning activities, the personal track group started off Saturday by combining head and heart to come up with a hustle. They listed issues they cared about and skills they were good at, and then, with the help of Diane and the other facilitators, they found creative ways to combine those into a hustle that used the best of both.

The problems group started with a lively discussion about the differences between apathy, sympathy, and empathy. They talked about how to learn what the problems surrounding an issue really are and how to start to address them. They practiced asking the right questions.

The projects group, led by Harrison, started out with a discussion about projects they were working on or wanted to launch. Thirty-odd students went around a circle, each telling about a plan they had to solve a specific problem and the ways they had already started to tackle those issues. The facilitators helped them figure out which details they still needed to nail down and how to start taking those next steps.

After a delicious lunch, the groups split back out into their separate tracks again. Everyone went for a long walk, taking advantage of the beautiful scenery of the North Carolina mountains. The personal group practiced deep listening, while the projects group brainstormed.

We all came together again in the evening and the students helped their peers come up with even more creative ideas to tackle problems. We had story time, and two of our facilitators, Romain and Tessa (better known as T-Money) told the stories of how they started the projects they’re using to change the world. We wrapped up the evening with another bonfire after a long, productive day.

Sunday morning dawned bright and cold, with the temperature plunging to near-freezing during the night. We went down to the lodge for breakfast (most of us having found the hidden Starbucks by then), and then we went back up to Eureka Hall for the closing activities.

The students who had projects they wanted to start spent a few minutes putting together booths to present their initiatives. Pipe cleaners, Sharpies, and a lot of poster board were involved, and in about ten minutes, we had a mini-pitch fest. The other half of the group went downstairs for more activities while the projects group got their pitches perfected.

Then the real fun kicked off. The other group came upstairs, armed with a dozen small, plastic gems each. They voted on their favorite projects by dropping gems into cups, and it was inspiring, to say the least, to hear all these plans to change the world.

We wrapped up by giving away $300 to the top two winners so they can get started putting their projects into action. We had one last chat, tossing the blue elephant to the person who had the floor, and then we parted ways.

Moving Forward from the 2018 Ignite Retreat

The Ignite Retreat is an amazing event, and one that changes lives. So often in the media and on the internet, we hear people saying, “The world is a terrible place,” and not doing anything to change it. That was not the case at the 2018 Ignite Retreat.

At that retreat, these students said, “The world may have problems, but we’re going to fix them.” And not only that, they have plans for how they’re going to fix those problems, and business plans and names and logos and people and products. Even better than that, there were ninety-four of these people setting out to change the world.

The Ignite Retreat is a place of enormous hope and enthusiasm at a time when we need that more than ever. These students are the people who will save the world, and we are honored to help them start on that journey. If you’d like a more detailed account of what went on this weekend, visit our social media pages, and visit our website to sign up for the next Ignite Retreat!