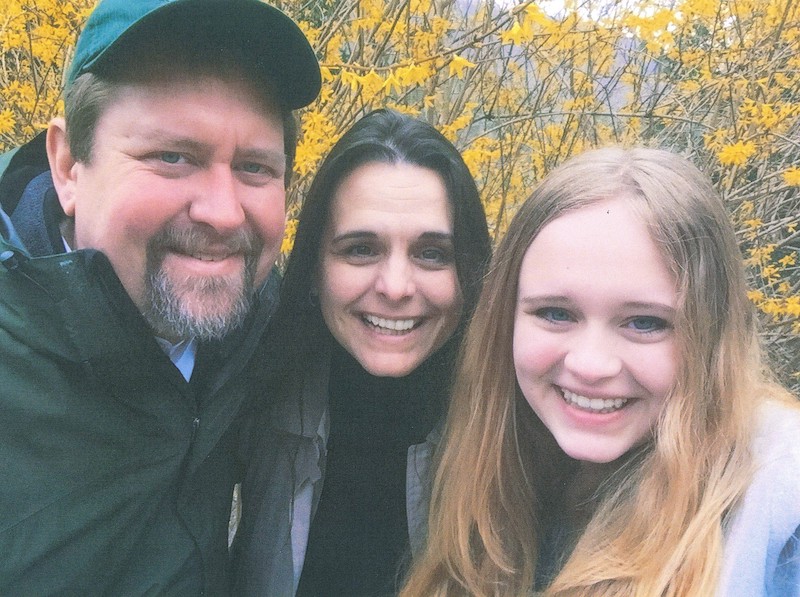 A single brass bell rang for recess every day at Dorton Elementary School in Dorton, Ky., where the voices of Georgia Belcher and her fourth-grade students could be heard echoing through the hallways for years. Georgia’s lessons still live on for countless students from her 42-year career in education, which began in a little one-room schoolhouse in eastern Kentucky in the 1930s.

Georgia’s daughter-in-law, Lois Belcher, dreamed of being an international missionary but stayed in Kentucky to raise her family, serve her church and work as a librarian. She was often heard singing, “This little light of mine, I’m gonna let it shine,” to her students visiting the library. “Instead of going off to far places to be a missionary, she made her mission field here,” Johnny Belcher said of his mom, noting that her daily actions exhibited the “sense and purpose” of Christian faith.

Lois Belcher’s light kept on shining through another generation, down to Johnny and his wife, Mary Belcher, both Sullivan Award recipients and Alice Lloyd College (ALC) graduates who have been inspired by their family legacy of treating people with kindness and respect.

Mary grew up with four older brothers—“rough and tough boilermakers,” as she described them—while Johnny was an only child from a family of educators. When Johnny blew out the 19 candles on his birthday cake on Jan. 24, 1993, he made a wish. “My wish was a prayer, a sincere desire in my heart,” Johnny said. “It was that God would give me someone to love.”

Johnny transferred that semester of his freshman year to ALC, a Sullivan Foundation partner school, in Pippa Passes, Ky.. His friend Stephanie immediately sought to set him up with Mary on a date, but Johnny was reluctant, thinking he was simply being used for a ride since he was the only one with a car. But he quickly realized that he had met the true love he had been praying for.

On their Jan. 26 movie date, Mary was struck by Johnny’s clear intentionality during the car ride. They went on a follow-up date to Dairy Queen the next day, and the couple was engaged by August. Johnny prepared a spreadsheet for Mary’s father to reassure him that they would be able to finish school and afford their financial responsibilities. They were married on Dec. 26, 1993. 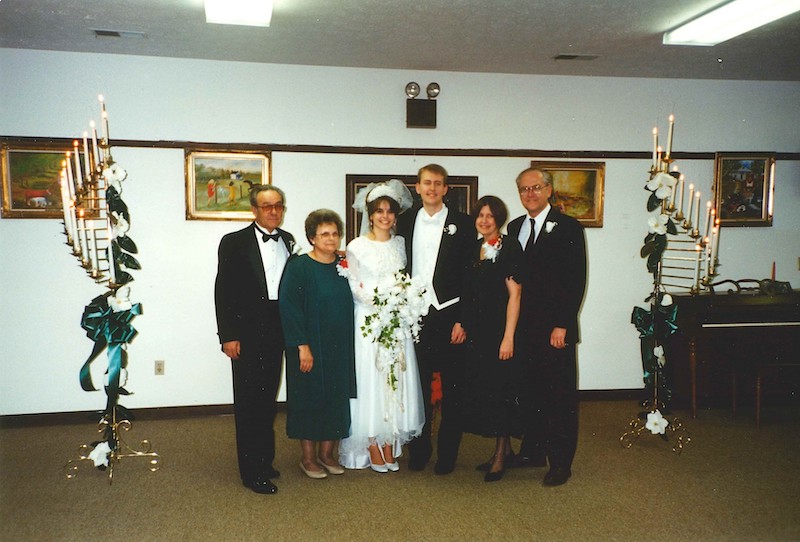 Johnny and Mary Belcher married within a year of meeting each other at Alice Lloyd College in 1993.

A Good Team
The Belchers made a good team from the start. ALC is a work-study college, so they were always paired together in work roles as students. Eventually, both were also paired as teaching assistants with their professors.

In 1997, the Belchers sat in ALC’s Campbell Arts Center for Honors Day, waiting for the Algernon Sydney Sullivan and Mary Mildred Sullivan Awards to be presented along with various leadership and scholastic awards. “[The Sullivan Award] was, in our eyes, one of the more prestigious awards,” Mary said, due to its emphasis on servant leadership and modeling of Christian values.

The event’s host, Dean Wallace Campbell, explained that this was the first time the Sullivan Awards would be given to individuals in the same family. Johnny and Mary assumed he meant a brother and sister. When their own names were called, they looked at one another in shock.

“It’s one of those moments in your life that’s a highlight,” Johnny said. “It is something I would never expect and something we have cherished. It helped motivate and perpetuate us to be that kind of [service-minded] person, but, more importantly, that kind of couple. Receiving it together reinforced our team.”

The Belchers adamantly insist that they don’t know why they received the Sullivan Award, other than for their daily acts of service. They joke as to whether or not one would have received the award without the other.

Upon graduating, the Belchers began teaching in Kentucky’s public schools, working down the hallway from one another for 24 years. Many students interested in engineering and medicine spend their after-school time in Johnny’s classroom studying calculus and physics. Johnny admitted he has high expectations for his students, but he never wants to keep a student from succeeding, frequently offering retakes on assessments to give them another chance.

Mary remembered two specific girls Johnny tutored daily prior to an exam. As they exited the exam after weeks of studying, they said, “Mrs. Belcher, this is not Mr. Belcher’s fault. He did all he could do, but we failed. It’s all our fault.”

“Now, how many times do you have kids, when they fail, not blame it on the teacher?” Mary asked.

There was another student who stayed after school every day for tutoring, since three out of his seven class periods were instructed by Johnny. “We kinda adopted him,” Mary said of the aspiring engineer. Johnny agreed. “He and I got very close because he spent so much time with me [over two years],” he said. 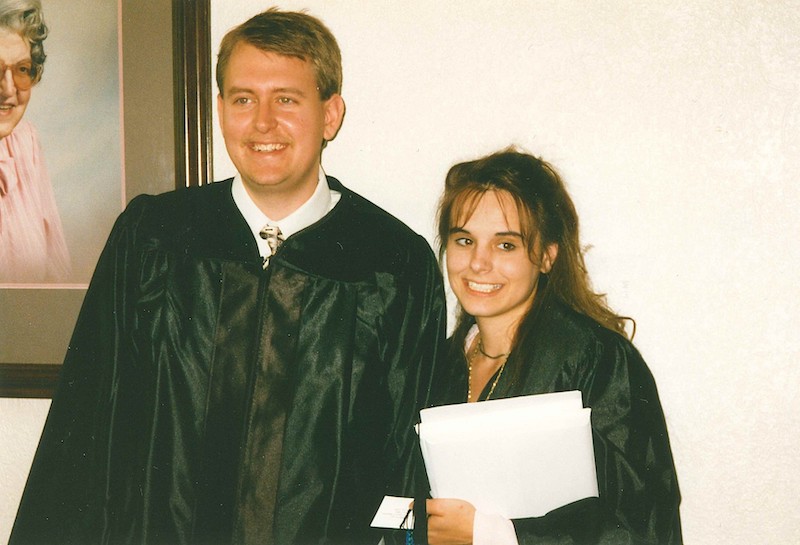 Years later, Johnny received a photo of that same student, now an engineer, boarding his employer’s private jet. “That was a proud moment,” Johnny said. “You can destroy a child’s confidence in those classes. With him, I was always playing that line of trying to keep the expectation where I knew he would need it to succeed once he went off [to college] but trying to help him get there.”

Mary took the same approach in the classroom. “I always struggled to maintain high expectations but also provide support and be good to people,” she said.

She recalled one of the meanest students she ever taught. Twenty years later, she saw that same student at Kmart. Mary was nervous as she approached her, but the former student embraced her, saying, “Mrs. Belcher, I’ve been looking all over for you.”

“I think about you so much, and I so wish my daughter had you as a teacher,” the student went on to say. “I tell her all the time that she needs a good dose of my seventh- and eighth-grade science teacher.”

Guided by Faith
The Belchers said their Christian faith serves as their daily compass for decisions and as a motivator to love their neighbor well, whoever that person may be. “We’re all searching for purpose to some degree; if we’re not, we eventually feel very empty,” Johnny said. “Faith gives us that purpose.”

Working in rural Appalachian communities, the Belchers witness an ongoing cycle of poverty. “Poverty can become a way of life,” Mary said. They’ve seen too many students who lack confidence in their ability to succeed and end up falling into the cycle. As educators, the Belchers believe their role is to encourage students to explore new horizons and show them what is possible. “We feel that education is a key that can unlock a lot of doors for kids,” Mary said. 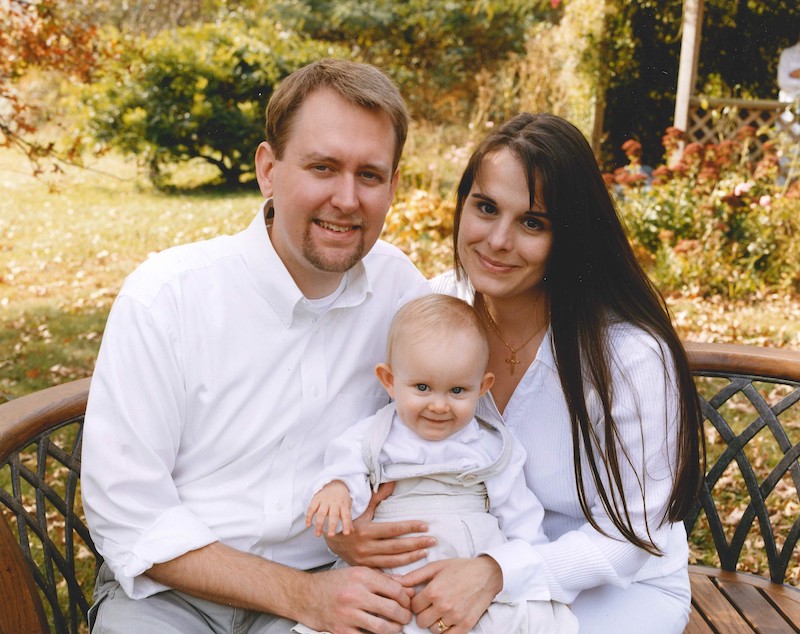 Johnny and Mary with their daughter, Sarah, when she was a baby.

The Belchers presently serve their county’s public schools through administrative positions focused on supporting teachers. They work with the Kentucky Valley Educational Cooperative (KVEC), an organization serving more than 50,000 students and 3,000 educators in 22 school districts in eastern Kentucky. Many of these districts are impoverished, with more than 90 percent of the students receiving free or reduced-price lunches. The KVEC provides assessments and accountability initiatives for these districts as well as technology roll-outs.

Finding humility through non-direct interaction with the people they serve, the Belchers place a high value on demonstrated care for their community in any capacity. “It may be that you’re not born there, but if you live there and work there, that’s your community, and we all have an obligation to help make our community better,” Mary said.

Then, Johnny and Mary chimed in together: “Your service,” they said, “doesn’t have to get you in the newspaper.”