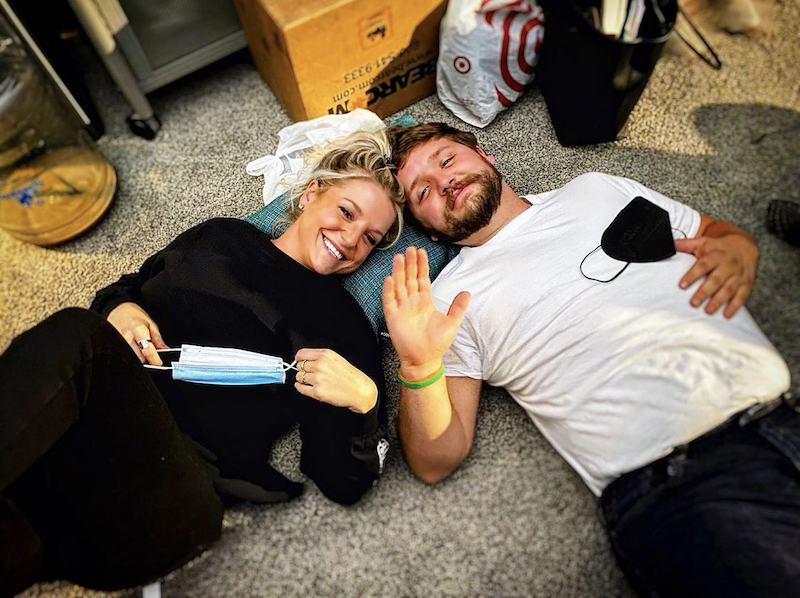 Jonathan Harrison, an alumnus of Sullivan Foundation partner school Auburn University, wants to be the “face of progressive Southern food” and a champion of positive change. He’s getting his chance as one of the 15 chefs competing on Gordon Ramsey’s new cooking show, “Next Level Chef.”

Harrison, a native of Columbiana, Alabama, is competing for a first prize of $250,000 on the new FOX show, which was filmed in Las Vegas in September and is now airing at 8 p.m. (CT) on Wednesdays.

“My goal with food is to use it as a tool to facilitate conversations that move the South forward and bring positive change for everyone in the South,” Harrison said. “With good food you can get different people to sit across from each other at a table, and that’s where those conversations start that bring empathy and understanding. That’s how change happens.”

Related: Want to create social change but don’t know where to start? Join the Sullivan Foundation for its Spring 2022 Ignite Retreat!

Harrison, 29, studied journalism at Auburn and has worked as a chef, realtor and on-site coordinator for the 4-H Youth Development Center in his hometown since graduating from Auburn.

Harrison’s love for Southern cooking has influenced him since he was a child. Growing up in what he calls a “food-centric family” placed some of his happiest times around the dinner table or at Sunday lunches. What he most looked forward to on weekends, he said, wasn’t watching football or cartoons on television, but cooking shows like Ina Garten’s “Barefoot Contessa.” 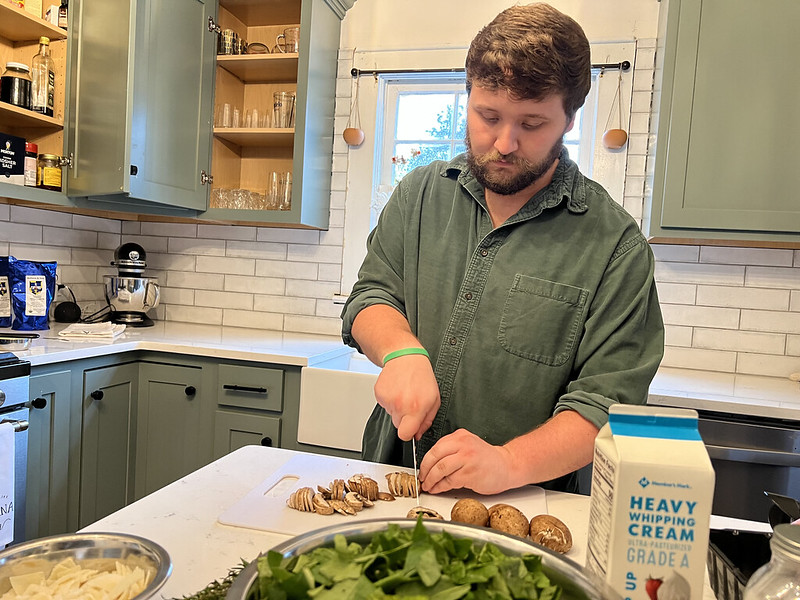 Next Level Chef competitor Jonathan Harrison chops some veggies for a meal at home.

“I remember watching Ina Garten on the Food Network and was like, ‘Wow, that looks good,’” Harrison said. “I kept thinking I might be able to cook that if I could just get someone to buy me the ingredients. I just always absorbed it really easily.”

Even though he grew up in a family of Alabama fans, Harrison said he “saw the light” when he was 19 while visiting a friend on Auburn’s campus. The university’s impact on him was instantaneous. He transferred to Auburn and completed a degree in journalism, an experience he fondly remembers. “It felt like home immediately, and I loved it so, so much,” Harrison said. “Auburn feels like family, and that’s what I love about it. It really is the most loving community, loving campus, a family-oriented place, and I loved it.”

While at Auburn, Harrison also learned to cook with limited means, a skill that would help him compete on “Next Level Chef.”

Related: Study abroad in France this summer to perfect your leadership skills and drive impact and innovation. Click here to learn more!

Originally, Harrison had considered a career in food journalism after graduating. He ultimately changed his mind, but his love for cooking never left him. He began posting photos of the meals he would cook at home on his Instagram page, and soon people began asking to get a taste of his food.

“I started having driveway dinners during COVID, because we couldn’t be inside and I couldn’t host dinner parties,” Harrison said. “That’s when I started to realize that maybe I was better than I thought I was, or maybe I had the potential to be good.” 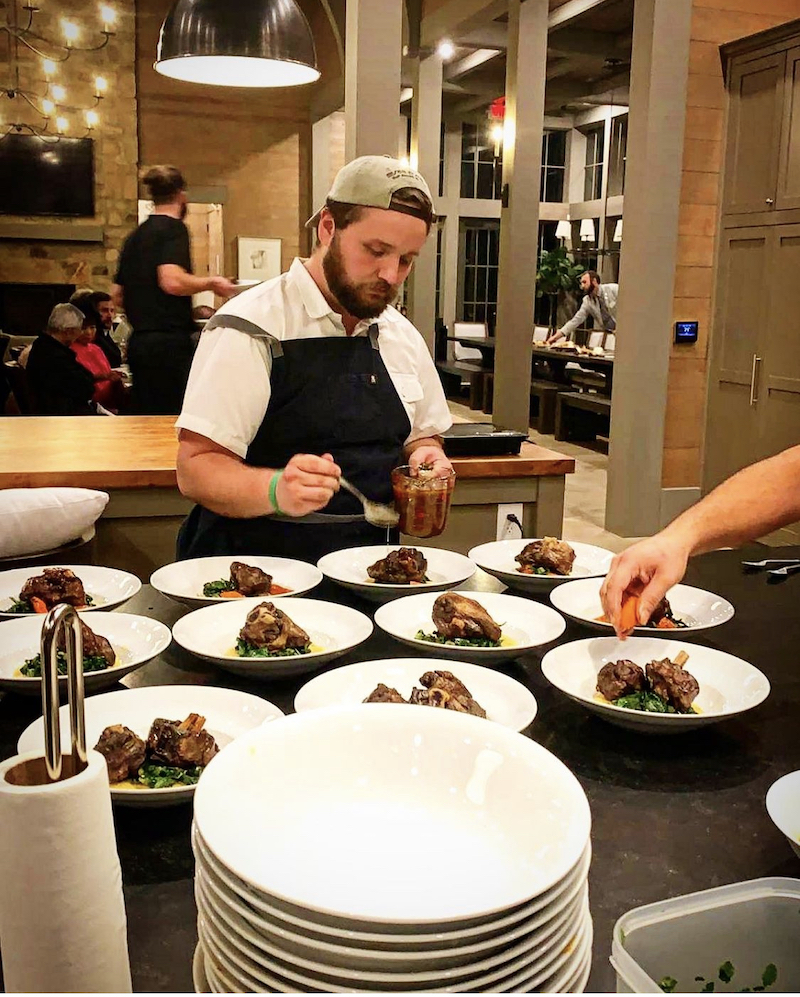 Harrison prepares a meal for a group of Birmingham realtors at the Blackridge Club in Hoover, Alabama.

A friend sent Harrison a link to the application for “Next Level Chef,” but he almost decided against it. After two weeks, he had a change of heart. Even after receiving a text message asking to speak with him from the “Next Level Chef” team, Harrison doubted he had a chance to make it onto the show. “I didn’t believe it was happening to me until wheels were up in September and I was headed to Las Vegas,” he said.

“The experience was the best in my life,” Harrison added. “I’ve never put myself in such an emotional pressure-cooker like that. I mean, you’re cooking for arguably the heaviest hitter in the food game and two people he has deemed heavy hitters in the food game, so you are constantly nervous about them judging your food. It was nerve-wracking, but the growth that I achieved while I was there was astonishing, and I’m just really proud of putting myself out there.”

Just as valuable as the knowledge Harrison acquired were the friendships he gained on the show. “I made friends that I’ll always have, who are from all walks of life, from all over the United States, and it was amazing,” Harrison said. “I mean, that’s my whole deal. My whole deal is taking the South to the world and bringing the world to the South.”

Now back in his hometown, Harrison works as a camp coordinator for the science school at the Alabama 4-H Center. The 4-H Center is the central location of the Alabama 4-H Program, which is part of the Alabama Cooperative Extension System. Harrison helps book school trips to the center, organize activities for the groups and makes sure that everyone is prepared for a successful trip. He also books activities for groups using the conference center. The chance to interact with and have an impact on the youth of Alabama every day is the best part of the job for Harrison.

“My favorite part of the job is the people and the kids,” Harrison said. “I get to interact with so many people from different places and get to really see the kids learn and grow on a daily basis, and that’s really rewarding.”

Kristy Abrams, director of the Alabama 4-H Center, has seen Harrison put his passion for cooking into action while at work. “During COVID, the Alabama 4-H Center had to be creative to attract individuals because groups were not traveling,” Abrams said. “We hosted a variety of events: Great Family Stay-Cays, a music festival, a Fourth of July event and a Fall Garden event. The 4-H Center had Jonathan prepare a farm-to-table meal for the Fall Garden event.

“Jonathan could go from team-building to lifeguarding to rocking out a campfire to preparing and cooking an incredible meal during these events. I was so proud when he told me he had been selected to be a contestant. He has a passion for people and a passion for food and was able to bring those two things together following his dreams.”

Molly Gregg, assistant director of the 4-H Program, said there’s no better person to represent the program. “It is so fun to watch him now and think about him as a young 4-H camp counselor,” she said. “He has been a shining light on the youth of Alabama and his community for a long time.”

Looking forward, Harrison hopes to continue to push for change through his cooking however he can. “I’d love to be out there as the face of progressive Southern food and really just push for equality for all groups of people all over the South and be accepting, loving and spreading the message of radical empathy as much as I can,” Harrison said. “Anywhere I can do that is where I want to be.”