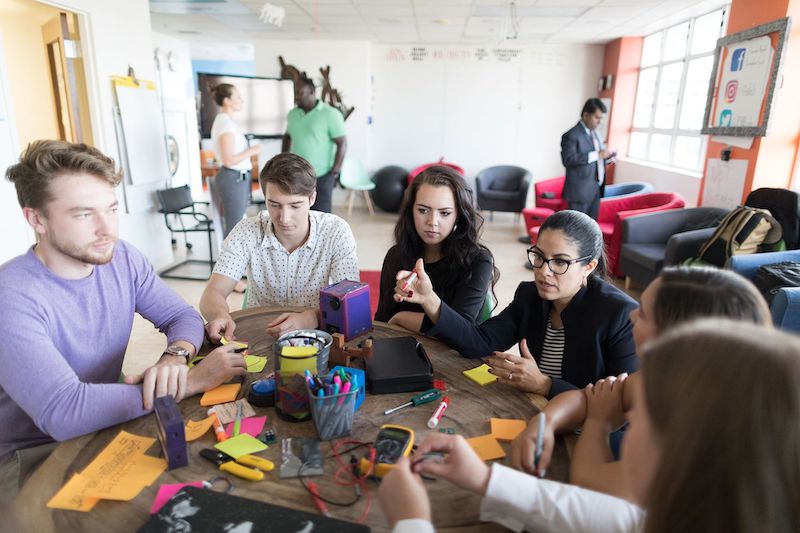 For as long as she can remember, Josephine Balzac-Arroyo enjoyed learning. “My mother never had to get onto me to do my homework when I was a kid,” she said. “I was always very studious and genuinely loved school.”

As the oldest sibling born into a Latinx family—her father is from Puerto Rico and her mother immigrated from Nicaragua seeking political asylum during the civil war—Balzac-Arroyo saw the sacrifices her parents made to give her and her brother a better life growing up. “I saw how hard they worked, and I wanted to work just as hard,” she said.

And work hard she did. After graduating as valedictorian from her high school, she attended the University of Central Florida, where she majored in psychology, and started a part-time position at a law firm. And then she rebelled, maybe for the first time in her life.

“My dad wanted me to apply to law school right out of undergrad, but I pushed back. For as long as I could remember, I’d devoted my life to school. Now I wanted to start my career,” she said.

Related: How Rollins College and the Sullivan Foundation are developing the next generation of impact entrepreneurs

For the next few years, Balzac-Arroyo worked as a paralegal in different law firms around Orlando. Her meticulous attention to detail served her well, and she soon gained a reputation as smart, hardworking and reliable.

“And then I had a mid-20s crisis,” she laughed. “My dad had been right. I wanted more. So I applied to law school, and it completely changed the trajectory of my life. In law school, I became more analytical, more inquisitive. I was inspired by so many things, specifically environmental law, climate change and the connection between our rights as humans and having a clean and healthy environment.” 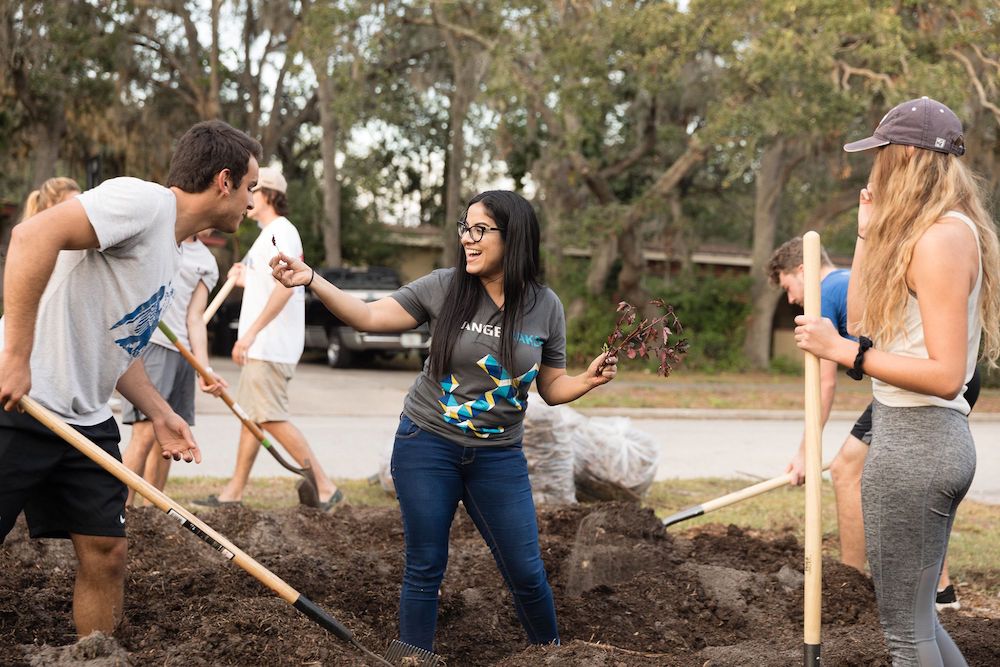 Balzac-Arroyo and her students worked with Fleet Farming, a program developed by local nonprofit IDEAS For Us, to transform residential lawns into micro-farms that help decrease greenhouse-gas omissions. (Photo by Scott Cook)

After receiving her JD from FAMU College of Law, Balzac-Arroyo attended George Washington University, where she received a Master of Laws (LLM) in international environmental law. Along the way, she developed a love of teaching. What if she could parlay all that she was passionate about—teaching, the environment, effecting change through strategic activism—into one perfect job?

Enter Rollins. Now, six years on, she knows it was the right choice. “I’ve fallen in love with being in the classroom and the opportunity to impact future generations,” she said. “My students give off an energy that keeps me going, and hopefully I can inspire them in similar ways.”

International relations major Josh Willard, a class of 2020 graduate, met Balzac-Arroyo in his first semester at Rollins during his Rollins College Conference (RCC) course, Be the Change, an introduction to social entrepreneurship and the many different ways to use social disruption for good.

“Professor Balzac-Arroyo radiates a sense of optimism that we, as students, can make the world a better place,” he said. “I took one class with her my first year and have kept going back to her office for four years. She became one of my most important mentors, and her support set me on the course I’m on today. She encouraged me to open all the doors I could, and it just so happens that the door I chose to walk through, after graduating from Rollins, was to her alma mater, George Washington University, where I’m getting my master’s in international affairs.”

Balzac-Arroyo is always connecting with students—whether it’s turning local lawns into organic farms or through Rollins’ Social Impact Hub, where anyone, regardless of their major, can partner with faculty and peers to tackle global social issues such as poverty, sustainability, education and more. The hub is designed to be a creative space where students can pitch ideas both big and small.

“The Hub is focused on aligning our actions with the United Nations Sustainable Development Goals,” Balzac-Arroyo explained. “We introduce students to social innovation and teach them to be changemakers within a global community.” 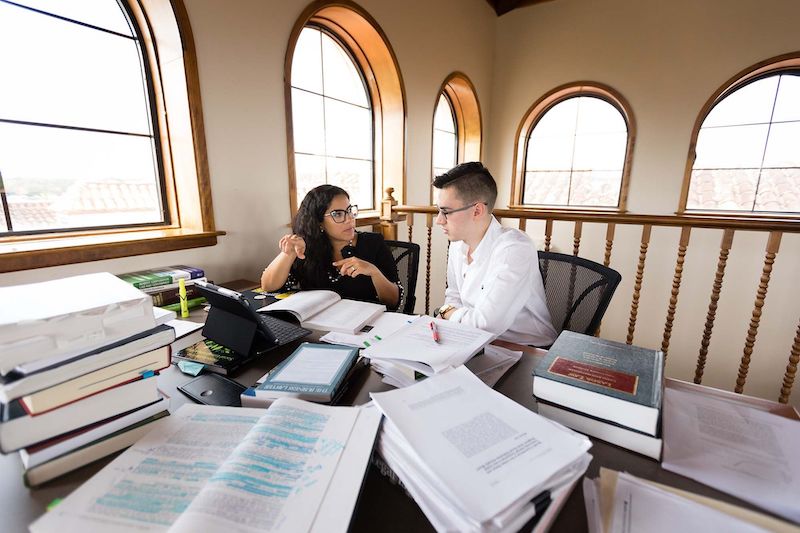 Through Rollins’ Student-Faculty Collaborative Scholarship Program, Josie Balzac-Arroyo and student Joshua Bedoya examined how corporations and businesses are being redefined as society is demanding that companies serve a social purpose and benefit all stakeholders. (Photo by Scott Cook)

One of the ways Balzac-Arroyo introduces her students to social innovation is through the Social Impact Hub’s yearly pitch competition, Ideas for Good. Students in her community engagement course, called Strategies for Changemakers, choose a Sustainable Development Goal and develop a pitch using the concept of human-centered design thinking. This means they engage in research about the needs of a community before they even begin to develop a solution. Past projects include everything from developing a better method for recycling plastics to investing in technology that makes it easier for diabetics to gauge their blood sugar levels. Once they’ve developed a pitch, students can win up to $50,000 in seed funding to make their ideas a reality.

Despite the wide range of subject matter, every project developed by Balzac-Arroyo’s students has one thing in common: Real people are at the heart of each and every idea. “By spending time with a community, it allows you to identify problems more effectively,” she said. “We want to avoid a savior mentality in favor of co-creating solutions to social challenges.”

Creating Pathways for Change
One of the classes Balzac-Arroyo especially loves teaching is Law & Ethics of Social Innovation & Entrepreneurship, which is a requirement of the social entrepreneurship program but doesn’t require prerequisites—meaning any student who is interested in the law can take it. This often results in a mixed bag of majors, everything from political science and international relations students to those pursuing social entrepreneurship. Each of these students brings a unique perspective to the course, which makes for a dynamic, collaborative environment through which to study law and gets at the very heart of Rollins’ interdisciplinary approach to education.

“I want my students to know that the law should not be intimidating,” Balzac-Arroyo said. “We operate in a world of laws every day. So even if you don’t plan on going to law school, there are still plenty of things you need to know if you want to go into business. How do you protect your employees? How do you build a basic contract? What do you need to know about intellectual property when it comes to your name, your logo or any proprietary technology you might develop?” 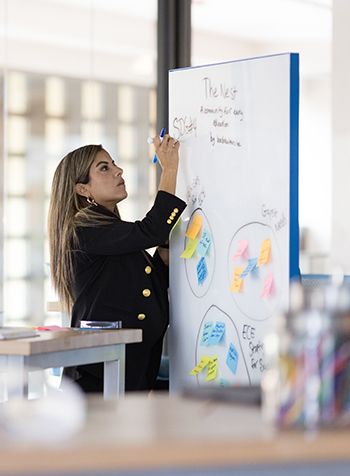 Another major component of the class is mediation and negotiation, skills that are essential for changemaking. Balzac-Arroyo uses them constantly both in and outside of the classroom in her role as a community advocate for social and climate justice. It’s just another way that this lifelong learner continues to embrace new methods of effecting change.

Teaching and inspiring students isn’t Balzac-Arroyo’s only talent. She also loves to sing—she’s so good, she made it to the second round of American Idol. And her commitment to climate change led to an invitation to personally meet Senator Bernie Sanders in his Washington, D.C. office, where they discussed climate justice policy.

But Hannah Jackson, a social entrepreneurship graduate and current Crummer Graduate School of Business student, said Balzac-Arroyo’s main strength comes from her willingness to work alongside her students in the quest for change. She noted that Balzac-Arroyo creates “an enjoyable environment where students actually want to learn.”

“She appreciates students’ input just as much as her own, which makes it feel like she is learning alongside us,” Jackson added. “She’s mastered the skill of making students feel valued, and I look up to her because of her strength and courage to always stand on the right side of justice. As a woman of color, sometimes that boldness comes with a risk, but Professor Balzac always welcomes that risk with confidence.”

This article has been edited from the original version appearing on the Rollins College website.