For the Love of Elephants: Furman University Alum Educates Public About Plight of Pachyderms 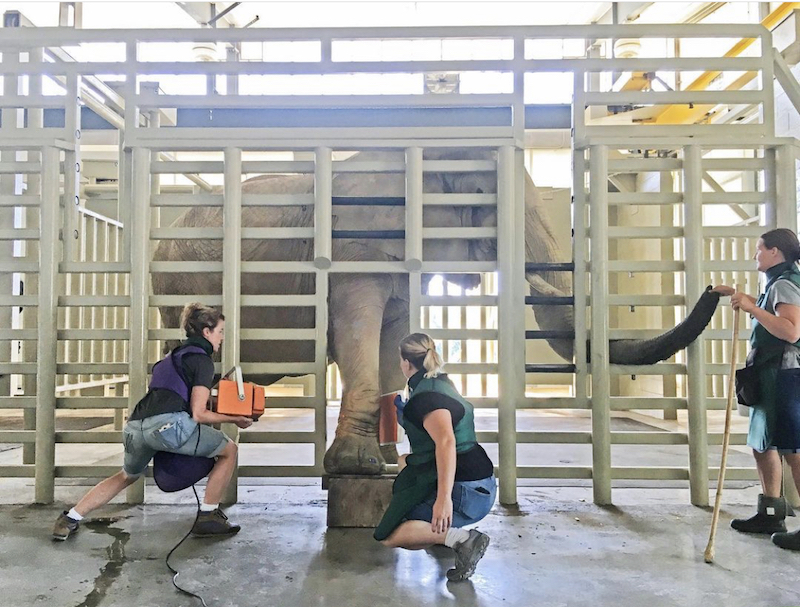 Joy Owens says her career at The Elephant Sanctuary came about through a combination of serendipity and luck. A 2014 sustainability science graduate of Sullivan Foundation partner school Furman University, Owens also credits her three internships for shaping her future in informal education, the role she holds as education manager at the sanctuary, located in the unlikely and humble town of Hohenwald, Tenn., population 3,687 (not including the 11 Asian and African elephants who live in the sprawling sanctuary).

“I was job searching on the internet one day, and when I saw the job listing for an education manager at an elephant sanctuary, I was like, ‘Is this real? Am I being pranked right now?’” Owens recalled. 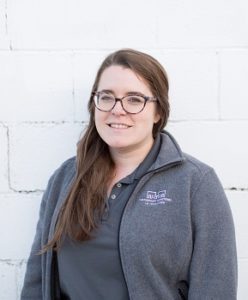 After confirming the sanctuary was a legitimate, licensed organization, Owens applied for the post. “Luckily, I got the job,” says Owens, now marking four years at the sanctuary, which celebrated its 25th anniversary in 2020.

The 2,700-acre sanctuary offers a second lease on life to elephants who have spent years in captivity in zoos, the entertainment industry or in traveling circuses.

Specifically, it provides captive elephants with individualized care, the companionship of a herd and the opportunity to live out their lives in a safe haven dedicated to their wellbeing, according to the sanctuary’s website.

It’s the second part of the sanctuary’s mission—to raise public awareness of the complex needs of elephants in captivity and the crisis facing elephants in the wild—where Owens comes in.

As part of a “small but mighty team” of three in education and outreach, Owens develops curriculum and implements and analyzes programming to ensure the sanctuary’s educational objectives are being met.

A true sanctuary, the facility is not open to the public. But through distance learning, strategically placed EleCams and The Elephant Discovery Center in downtown Hohenwald, the public has access to a trove of information about Earth’s largest land dwellers—a trove Owens is happy to dispense.

Owens’ calling in informal education in the nonprofit space first became clear while she served a post-graduation internship at the Carl Sandberg Home in Flatrock, N.C., near her hometown of Mills River.

“They (informal education settings) really allow me to connect with audiences and talk about topics I’m passionate about, whether that’s the environment, food, sustainable agriculture or animals and conservation,” said Owens, who also helped manage the Furman Farm and served a research internship through Furman’s Shi Institute for Sustainable Communities, where she studied community gardens.

As an educator, Owens does not interact with the elephants. That’s the role of 18 full-time caregivers at the sanctuary, who have built individual relationships with the pachyderms over the course of years.

“My job is to talk to people, get them excited about our mission, our work, and excited about conserving elephants,” Owens said. “We Skype, Zoom and Google Meet with people all over the world.” Last year, the team spoke to more than 15,000 people across 20 countries and 44 states. 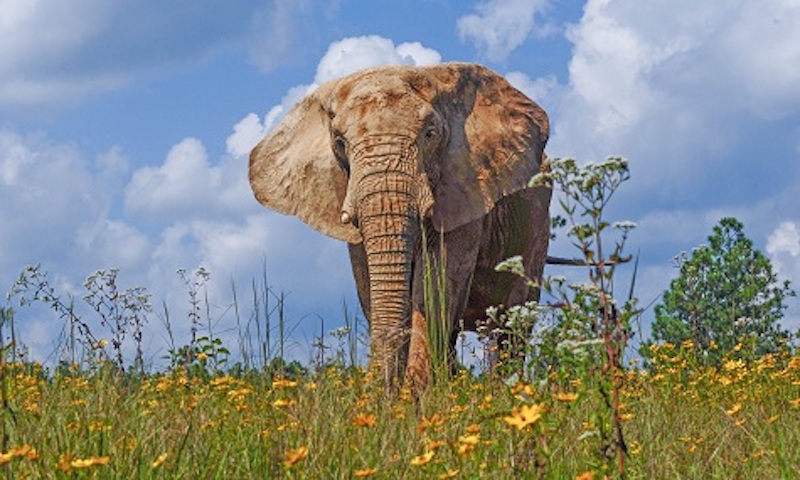 Flora enjoys a lumbering stroll in a field of flowers at The Elephant Sanctuary.

As veteran online educators, Owens and staff didn’t need to scramble to get up to speed when COVID-19 hit. “We’ve been doing distance learning for eight years, long before the pandemic necessitated it,” said Owens, whose diverse clientele spans a range of ages and geography. “My day could start with kindergartners in Massachusetts and end with fifth-graders in Greece,” she said.

But, with the onset of COVID-19, the types of clients have changed to include corporate offices, such as Google, and other adult groups like Rotary Club and women’s clubs that are now meeting online versus in person.

No matter the audience, Owens wants to drive one message home.

“I want people to know that elephants are extremely complex animals—very intelligent and very emotionally intelligent with complex needs,” she said. “I really like to point that out because elephants are still kept in captivity and used in entertainment.”

It’s true. Some are isolated in makeshift roadside zoos, and some travel in smaller circus operations, as there are no federal laws regulating the use of elephants in performance, Owens said.

A few states and cities have passed restrictions.

“I always challenge people to critically think, ‘Is that the best life for elephants?’ I think if people knew just how intelligent these animals are, how deeply bonded they can be with their herd and how vast their health needs are, they would be a lot more hesitant to engage with elephants in captivity the way we currently do,” said Owens. 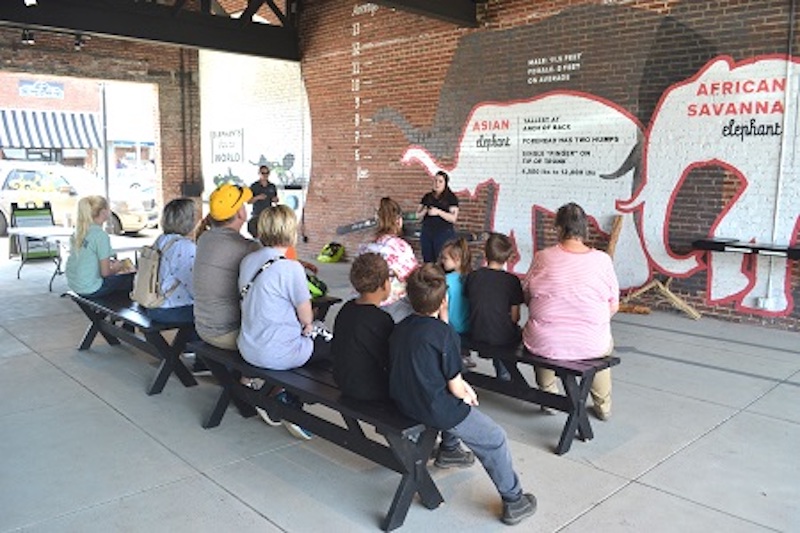 Under fire from animal rights groups and local governments, Ringling Brothers and Barnum & Bailey Circus discontinued the use of elephants in 2016. But there remain elephants who aren’t getting the care they need.

For Owens, it’s the younger audiences who really inspire her as she works to educate the public.

“The most satisfying part of my job, especially in the past year, is seeing the excitement in kids to talk about elephants,” she said. “Some of the kids were going to school online, full-time, spending hours per day on Zoom or Google Meet. That can get exhausting and mundane. But, whenever we would join a call, these kids would be amped—so pumped to talk to us about elephants.”

Being pelted with dozens of questions by school-age kids is a job hazard Owens gladly accepts. “Getting to have those interactions and just getting to be the person that excites them in their day or maybe adds some fun to their day is really rewarding,” she said.

This article has been edited slightly from the original version appearing on the Furman University website. All photos are courtesy of The Elephant Sanctuary in Hohenwald Tennessee. Visit www.elephants.com to learn more.