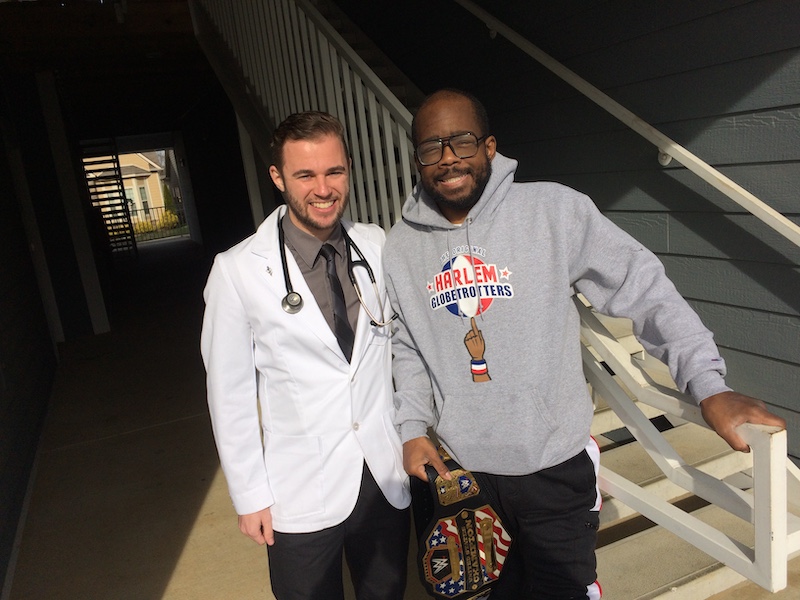 David Steele will receive the Christmas gift of a lifetime this year: a kidney from his good friend Michael Agostino, a medical student at Sullivan Foundation partner school Lincoln Memorial University (LMU).

Agostino will spend a big part of his Christmas break at Vanderbilt University Medical Center in Nashville, undergoing surgery to donate a kidney to Steele. The surgery is scheduled for Tuesday, December 29, with an expected hospital discharge of December 31, just in time for the New Year.

Update: The transplant was a success, and both Agostino and Steele were released from Vanderbilt University Medical Center on New Year’s Day, three days after the transplant.

Agostino, who hails from Franklin, Tenn., and Steele, of Thompsons Station, Tenn., met while working at Waffle House when Agostino was in college in 2011. Since then, Agostino has helped his friend through many diabetic complications, including a leg amputation, driving David to many doctor’s appointments, amputation clinic appointments, physical therapy and visiting him in the hospital on multiple occasions.

Steele’s kidney function has been declining for some time, and he was put on the national registry for kidney transplant in 2018. Agostino and Steele were shocked to find out they were a match since their blood types were opposite, O+ and O-.

“For a long time, I assumed we wouldn’t match because of our blood types,” said Agostino, a second-year student at LMU’s DeBusk College of Osteopathic Medicine (LMU-DCOM). “However, earlier this year I found out about a national organ trading program that allows you to exchange organs with other donors who don’t match their intended recipients. I didn’t know what the odds of matching in that program was, but I figured if there was a chance Dave could get a new kidney, I had to get tested.”

While several markers are tested, the drugs to prevent organ rejection from a kidney transplant have greatly improved so that only an ABO match is necessary. 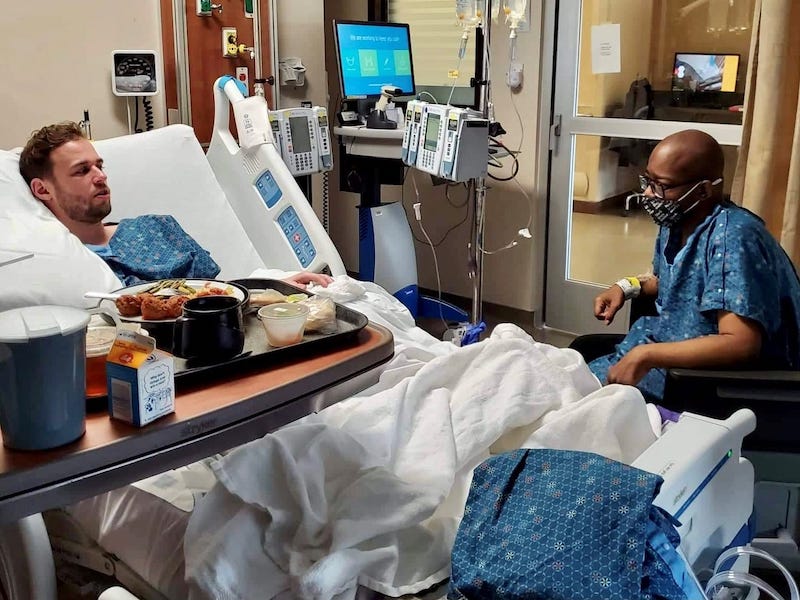 Agostino and Steele recuperate in the hospital the day after the successful kidney transplant.

After an initial online screening, Agostino was sent a test kit in the mail, which he took to the nearest lab to complete his blood work. Once the results showed they were a match, the hospital called to confirm his interest and sent him for more labs to evaluate his kidney function. After those results came back well, Agostino had to meet with a social worker to review the legalities and have a psychosocial review.

“I had to answer questions to help them determine why I wanted to donate, if I was competent to go through this process, and if I have a good support system,” Agostino said. “Next was the day of testing at Vanderbilt, where I met with doctors, nurses and a nutritionist as well as had a battery of tests, X-rays, contrast CT, ECG, echo and more blood work. Once everything was complete, the transplant committee officially approved me to donate.”

The Great Cat Migration gets underway at Lincoln Memorial University

Agostino was able to plan the procedure to happen over winter break so as not to affect his last year of didactic studies at LMU-DCOM.

“As a student I feel like I better understand how important living donors are to reducing the shortage of organ donations and improving patient outcomes,” said Agostino.

According to the National Kidney Foundation website, there are over 100,000 people currently waiting for a kidney transplant. A kidney transplant on average doubles life expectancy and those who receive a kidney sooner typically have better outcomes. One of the benefits of receiving a kidney from a living donor is that it usually functions immediately because the kidney is out of the body for a very short time.

The decision to donate a kidney can be overwhelming.

“Sometimes I feel like I don’t really know what I’m getting into,” Agostino said. “Not only have I never had surgery before, I’ve never even had stitches or been admitted to an emergency room, Agostino said. “What kind of friend would I be if I said I would do anything for him, but I couldn’t step into his shoes for even a moment? Of course, I have some concerns, but they’re nothing compared to what Dave has to deal with every day. I decided I want to be a person who would never give up on a friend and could inspire others to have hope in times that seem hopeless.”

This life-saving surgery means Steele will have many more years to spend with his friend, and he plans to start making memories by taking his friend to a live wrestling show once they are able.

“It means everything to me to know that my best friend cares about me so much that he would do this. It just makes me feel so blessed,” Steele said. “What am I looking forward to after the procedure? Mike has never been to a live wrestling show, and I’m a big wrestling fan. We watch it on TV when he is home on breaks, so I would like for us to go experience that.”

If Agostino could give one word of advice to others thinking of donating their kidney, he said, “The general impression that I’ve gotten from others who have donated is that I’ll never know it’s gone. Since I can’t speak to that yet, I would say, don’t be afraid if you know it’s right for you.”

This story has been edited from the original version appearing on the Lincoln Memorial University website.