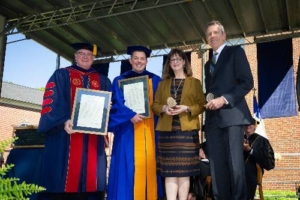 Sullivan Foundation partner school King University, located in Bristol, Tenn., honored a graduating student and a local couple for their high standards of character, integrity and service by presenting them with the 2019 Algernon Sydney Sullivan Award during the school’s spring Commencement ceremony.

Darrell D. Smith, who earned a Bachelor of Social Work degree Saturday, and community advocates Karen and John Vann were recognized with the prestigious honor named for the 19th-century lawyer, businessman, and philanthropist. The award recognizes those who “reach out both hands in constant helpfulness to others.”

A veteran of the U.S. Air Force Security Forces, Smith provided counseling and crisis intervention to survivors of domestic violence, neglect and other forms of abuse. Now retired from the military, he has been an active volunteer for the Children’s Advocacy Center, CARIS Healthcare, and Court Appointed Special Advocates while pursuing his degree. On campus, he has served as president of the Social Work Action Group and a member of the social work honor society. He also completed a 400-hour internship with the Veterans Affairs Hospital at Mountain Home, where he worked to provide care and comfort to veterans of our armed forces.

The Vanns are active members of First Presbyterian Church of Bristol, where they are engaged in the church’s mission outreach to Brazil. Additionally, Karen worked as Christian Educator from 1998 to 2006 and continues to serve the church by co-teaching 5th and 6th grade Sunday School. She also serves on the Evangelism and Outreach Committee. John serves as a church elder. 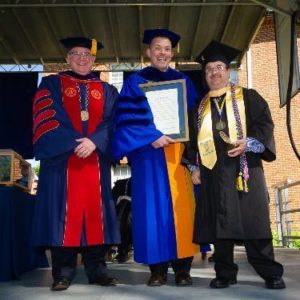 Elsewhere in the community, Karen volunteers her time with Bristol Faith in Action and the YWCA Board of Directors. She also has been a Reading Buddy at Fairmount Elementary School since the program’s inception and is an active member of the Blue Stocking Club, Bristol’s oldest women’s service organization. A 1998 graduate of King, she was appointed to the university’s Board of Trustees last year.

John is a graduate of Wake Forest University and was a co-founder and CEO of Clinical Trial Management Services where, upon its merger with Chiltern International, he served both as Executive Vice President of the Americas and Executive Vice President of Corporate Development. John is now affiliated with The Summit Companies as a Business Advisor to businesses and non-profits. A trustee of Wake Forest University, he also serves as president of the Rotary Club of Bristol, VA/TN and is on the boards of the United Way of Bristol, Citizens Bank, Javara Incorporated, Minds Renewed, Partners for Paraguay, Barter Theatre Foundation, and the King Institute for Faith and Culture Advisory Board.

King University is a Presbyterian-affiliated, doctoral-level comprehensive university accredited by the Southern Association of Colleges and Schools Commission on Colleges (SACSCOC) to award associate, baccalaureate, master, and doctoral degrees. Founded in 1867 as King College, the University offers more than 90 majors, minors, pre-professional degrees and concentrations in fields such as business, nursing, law, medical and health sciences, pharmacy, education, and humanities. Graduate programs are offered in business administration, education, and nursing. A number of research, off-campus learning opportunities, and travel destinations are also available. King University is a NCAA Division II and a Conference Carolinas member with 25 varsity sports.