Lainie Sowell: Making Sure No College Student “Falls Off the Bridge” 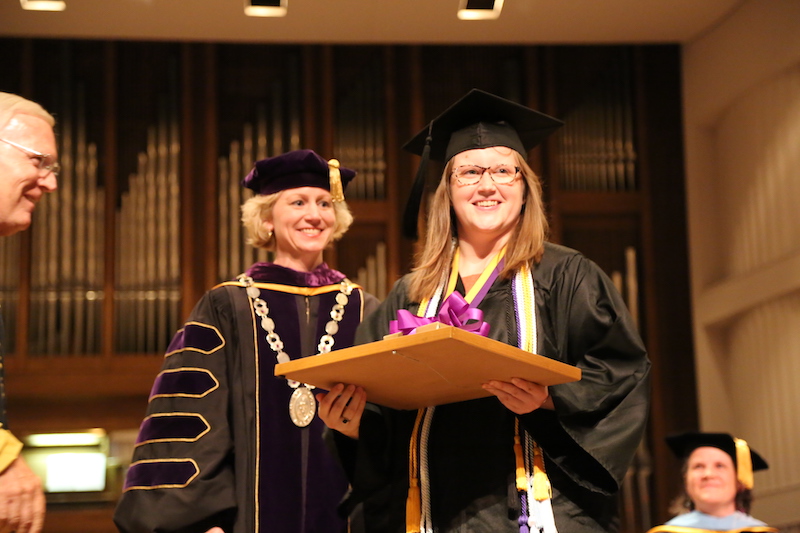 Kathryn “Lainie” Sowell, who received the Mary Mildred Sullivan Award from Converse College in 2013, serves as an example that we can trust life to guide us one day and one step at a time and that trusting the process will eventually lead us to a better reality than we could have imagined.

Sowell grew up in rural Concord, N.C., then moved an hour-and-a-half away to Spartanburg, S.C. to attend Converse. Prior to that, she had served as a peer helper for a special education instructor during her senior year at high school. “I really fell in love with working with those students, which is what led to me to [pursue] it in college,” Sowell said.

Even so, she started out as a music major. In high school, she said, “Band was, like, my identity.” That changed, however, during her second semester at Converse after she took some special education courses and fell in love with the department. She graduated from Converse with a double major in psychology and intellectual disabilities.

“I was obviously influenced by my 18 years prior to going to Converse, but if I think about who I am today as a leader, staff member and mentor, everything came from Converse,” Sowell said. “It was such a wildly impactful experience.” 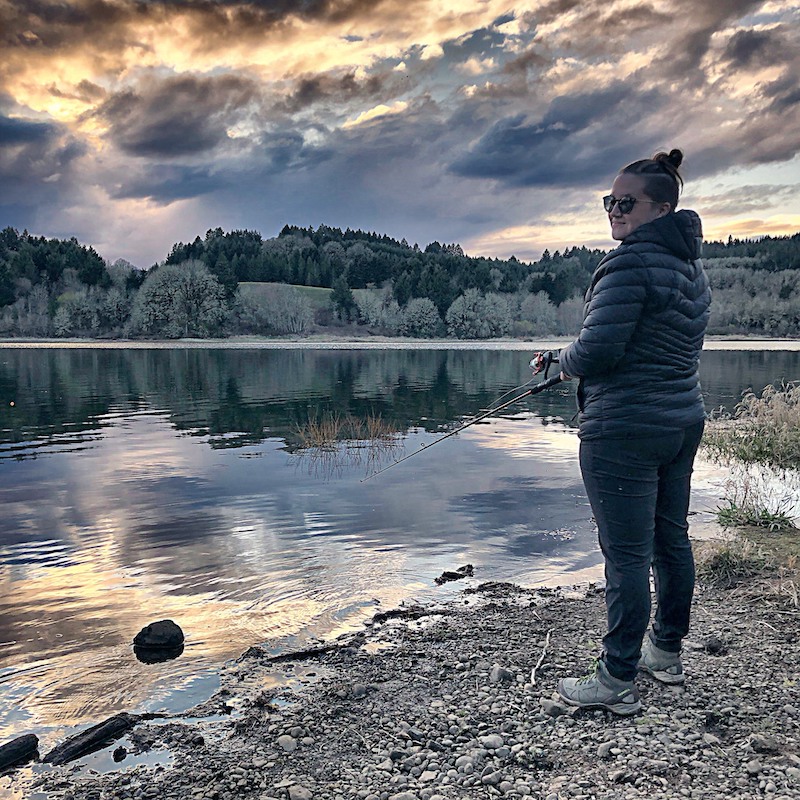 Converse is an all-women’s college, Sowell noted, and leadership development—“taught through a lens of women’s voices and women’s empowerment”— is at the core of everything. “It was important for me to test my voice and leadership in an environment where I didn’t feel like I had to play into gender roles or that I had to be a certain type of woman,” Sowell said. “It was nice to be in a culture of women leading women and empowering women.”

At Converse, Sowell spent much of her time empowering others through the Bonner Leaders Program. She committed a whopping 300 hours to community service during her sophomore year, followed by 450 hours in her junior year and another 450 hours as a senior.

Coincidentally, in her first year with Bonner Leaders, she was assigned to an adult care facility for people with disabilities. During the following two years, she volunteered at the university’s service-learning department. Sowell said these weekly hours shaped her identity and purpose. Dedicating so much of her time and energy to helping others without receiving financial compensation, she was reminded of her parents’ service-minded lives—not through any particular organization but simply by showing up for people who needed them. “It was modeled a lot for me,” Sowell said.

She also led on the Honor Board at Converse, which educated students about the honor code they signed at the start of every school year and adjudicated cases when the code was violated. Sowell served as a representative, then vice chair and, finally, the board’s chair. “I really enjoyed that, which ultimately led into my career later in life,” she said.

With all those accomplishments in servant leadership, Sowell was a natural choice for the Mary Mildred Sullivan Award, presented to her at Converse’s graduation ceremony. “The presenter read a bio on the recipient before announcing their name, and my friends and peers around me were whispering, ‘That’s Lainie! That’s you!’” Sowell recalled. “It was hard for me to believe, up until the time they said my name.”

Her best friend at Converse had received the same award a year earlier. “I realized it was a big deal, and I felt very honored,” Sowell said. “I didn’t set out to do any of that stuff to be rewarded for it, and I didn’t know that there was any [award] like that that would recognize me.” 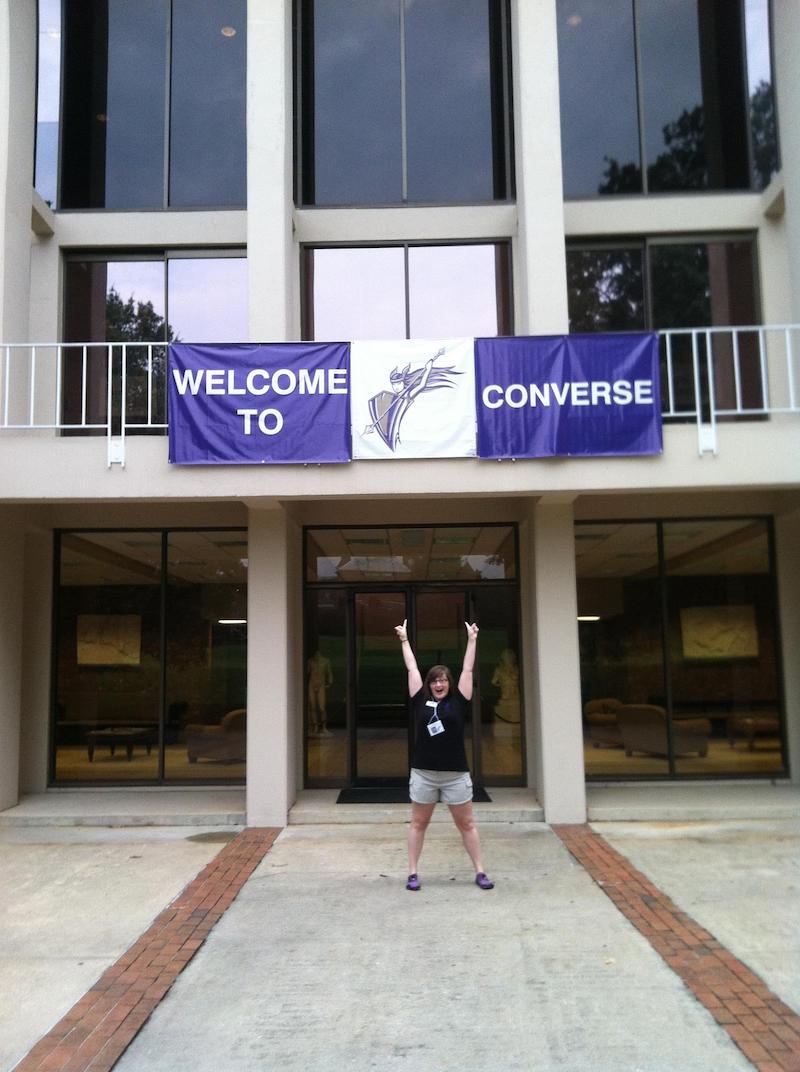 As a student at Converse College, Sowell devoted more than 1,000 hours to serving others through the Bonner Leaders program.

After graduation, Sowell taught for two years with Teach for America in Baton Rouge, then stayed in that city to teach at Children’s Charter School. Students in her classrooms ranged from those with physical disabilities operating just under grade level to those at an 18-months-old cognitive level. “Every single student needs something wildly different,” Sowell said.

Sowell reflected on how those students treated one particular classmate who had lower cognitive abilities—only able to say “yes” or “no”—with dignity and respect. “They talk to her and interact with her exactly the same as they would interact with me,” she said. “They do not care. They have full-on conversations and engage with her. They did not see her as different than them, which is incredibly modeled behavior for the rest of us.”

“They’re dealt the hand that, in most of society’s view, is less than ideal, and they’re happier than most of us,” Sowell added. “They don’t care about things that don’t matter. All of them are such a picture of resilience and self-advocacy.”

Sowell eventually began working for the Louisiana Resource Center for Educators, an alternative teacher certification program. There, she trained adults to become secondary special education instructors. They ranged from recent college graduates to 60-year-olds who always had a desire to teach. “I loved working with adults,” Sowell recalled. “It was everything that I loved about K-12 but with none of the micromanaging. It was so much fun.”

During this transition period, one of Sowell’s most trusted Converse mentors, Dean of Students Rhonda Mingo, gave her some advice. Evaluating what Sowell loved about training adults for teaching certifications, Mingo suggested she enter the field of student affairs. Sowell went on to earn her M.A. in student affairs in 2017 from Lewis & Clark Graduate School of Education and Counseling in Portland, Ore. Along with the mentorship aspect of the teaching certificate program, the master’s degree empowered her to assist students just as Converse’s staff had once assisted her. 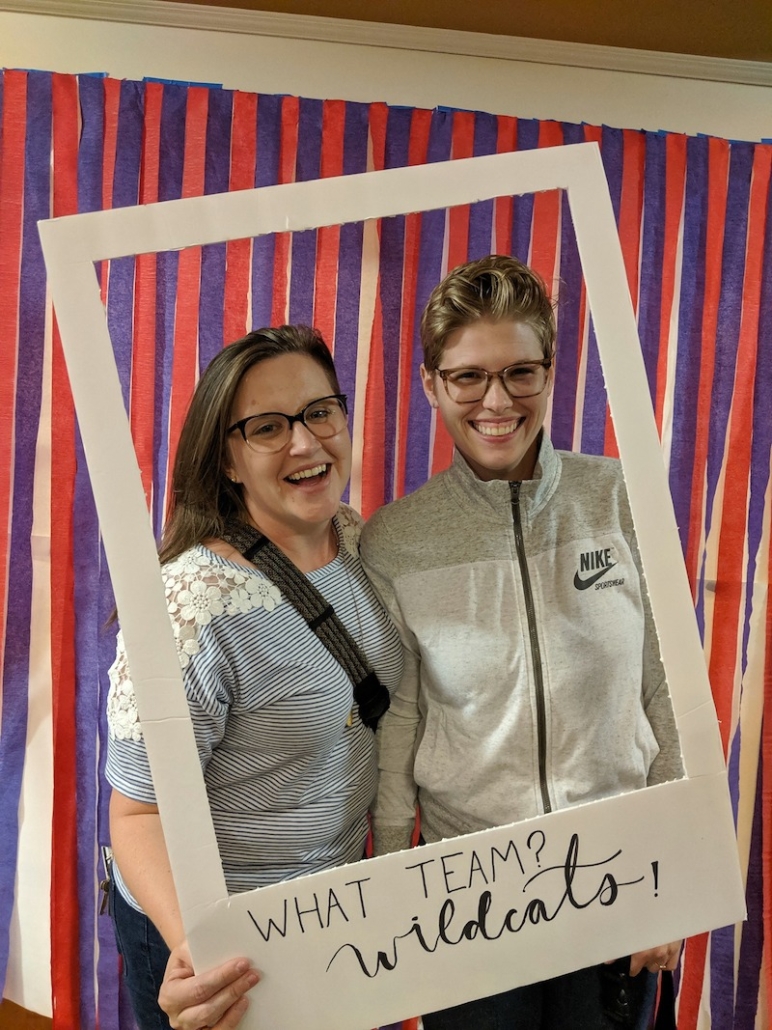 Lainie Sowell is now a proud Wildcat at Linfield University in Portland, Oregon.

In July 2019, Sowell began working at Linfield University in Portland, starting out with the title of Area Director for Student Success and supervising the resident advisors. Her current title at Linfield: Director of Student Care and Support. In this position, she works as a case manager for any student in need of help with, for example, mental health or bad family situations. Just as she did as a special education teacher, she creates individualized plans and connects students to proper resources.

Related: Jared Belcher: Listen to Your “Enemies” to Better Understand Their Fears and Suffering

Whether she’s dealing with students caught plagiarizing a paper or struggling to navigate college life in a pandemic, Sowell uses each situation to spark positive change. “Opportunities of struggle or conflict can be our biggest springboards for growth, if the right supports are in place,” she said. “I like to be the person who does not do the changing for you or tell you what to do, but, rather, that person that can walk along with you and present choices. I’m like the guideposts on the bridge. I can’t help you go across the bridge, but I can make sure you don’t fall off the bridge.”

Sowell continues to credit Converse for the trajectory of leadership and boldness that her life has taken. “I cannot think about myself and my identity without thinking about what that institution did for me,” she said. “I work in student affairs now because I want to be the person that those people were for me. I literally love college so much that I made a career out of it.”