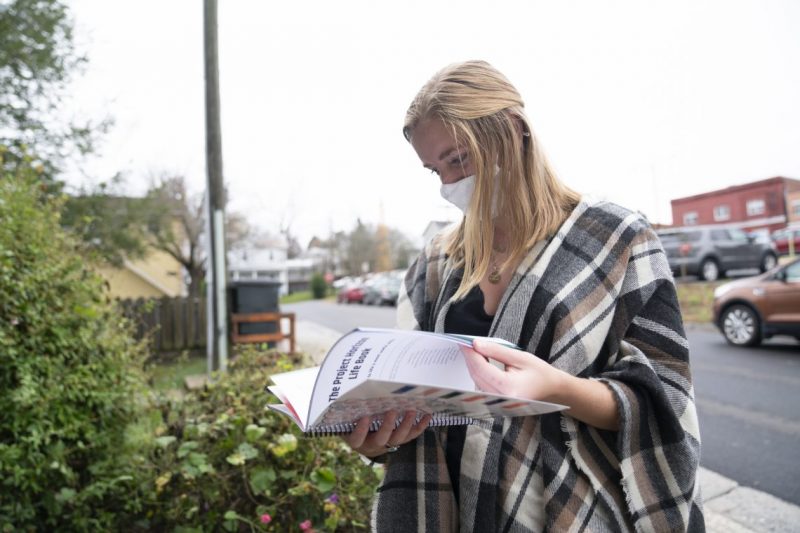 To the students in the Principles of Public Relations class at Sullivan Foundation partner school Washington and Lee University (W&L), the life skills book they created for clients at Lexington, Va. nonprofit Project Horizon is so much more than a how-to manual.

“This is a book of empowerment and independence,” said Jackson Monroe ’21.

Monroe is part of the fundraising team for the community-based learning project, an integral part of Professor Dayo Abah’s course this term at W&L. The finished books were delivered last week to Project Horizon, which provides 24-hour crisis response to victims of domestic violence and sexual assault along with a 16-bed shelter. They will be distributed to Project Horizon clients who have escaped abusive relationships and are ready to leave the shelter and embark on new lives.

The book is intended to help clients who have never had the opportunity to learn basic yet important life skills, such as how to change a flat tire or open a bank account. It offers instructions and illustrations on a variety of topics that range in complexity from how to make a grilled cheese sandwich or do a load of laundry to how to budget money or apply for a job.

“After people stay there for a month to three months, Project Horizon prepares them to live independently,” Abah said. “But that becomes challenging because a lot of them go straight from abusive relationships into the shelter. This is something they can hold onto while they go into their new life and try to remember those lessons they have learned.” 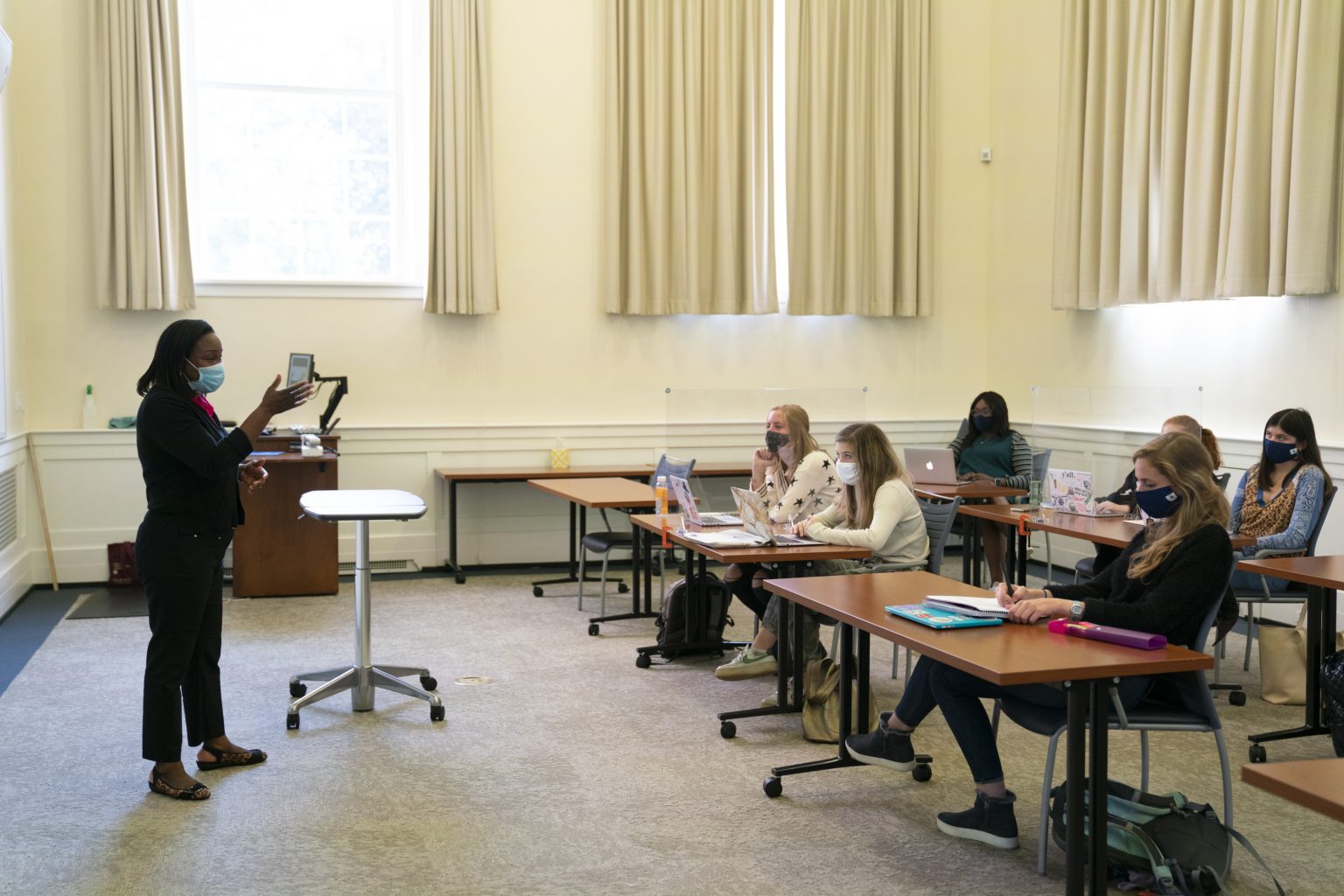 Professor Dayo Abah talks to her Principles of Public Relations class about their community-based learning project with Project Horizon.

Working with clients from the Lexington/Rockbridge community is not unusual in Principles of Public Relations, but the COVID-19 pandemic meant the class would have to approach that work differently this term. Students could not tour facilities or meet in person with clients, so Abah and Kaitlyn Kaufman, operations and volunteer coordinator for Project Horizon, developed a project that could be handled virtually.

Alessandra Del Conte Dickovick, associate director of community-based learning at W&L, said the university was fortunate to again partner with Project Horizon for a project that provides experiential learning for students. “Project Horizon is an incredible community partner,” she said. “They are widely respected and possess not only expertise on domestic violence but also our local community. They have been generous to welcome our students with open arms and have played an important role as co-educators for generations of students.”

When Abah’s students learned they’d be putting together a book from start to finish in one semester, they were excited to take on the challenge.

“I was happily surprised when we first heard about the project because, typically in public relations classes, we’re doing writing and social media work, and I’ve had experience in that,” said Courtney Berry. “But I’ve never created a book before, so this has been a really exciting opportunity.”

Before they started, Kaufman gave students a virtual tour of the facility so they could get a sense of the homey, welcoming environment there. Abah divided the students into three teams: fundraising, content, and layout and design. Ayo Ehindero, a member of the fundraising team, created a detailed schedule with weekly deadlines.

The content team started with suggestions from Kaufman but expanded the topics to include additional lessons that had not been initially considered. They wrote content at a reading level that would be accessible to any client. AP Smith, who was on the content team, said that, because many college students find themselves in the position of living independently for the first time, she learned a few things herself.

“The financial section and auto section were ones that required a little more of ‘maybe I need to figure this out myself, too,’ which is good because I’m about to graduate and hopefully have a job, so I’m going to need to know how to budget, too,” Smith said. 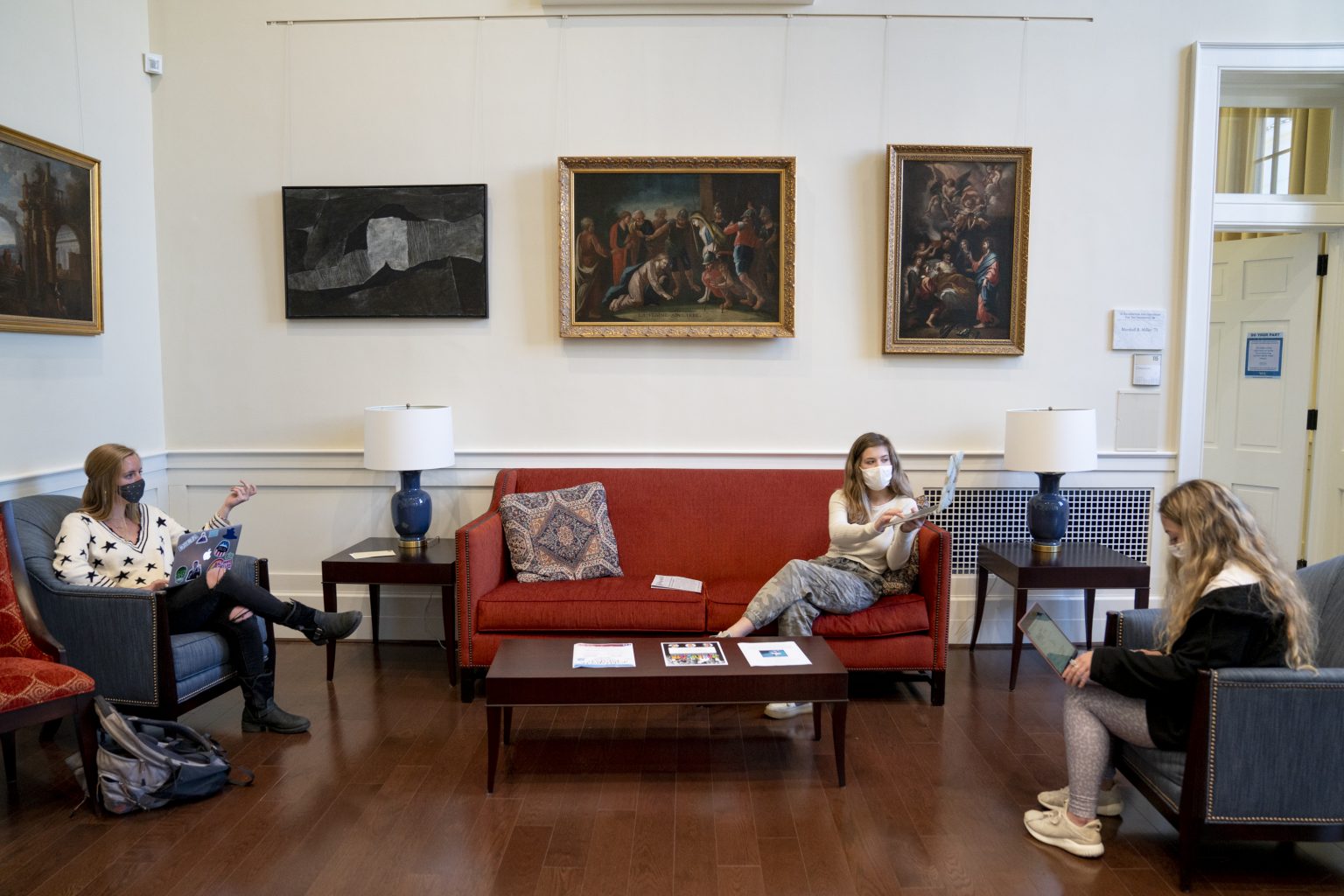 Students in Professor Dayo Abah’s class work on their book project together in the Lemon Reading Room at Washington and Lee University.

Berry, who is pursuing a double major in psychology and strategic communication, said she loves making art but doesn’t have much time to do that because of her classes. She and others on the design and layout team made more than 127 different illustrations for the book using their laptops, iPads checked out from the library, and new-to-them software. Berry also enjoyed learning about bookmaking basics and working toward a common goal with her classmates.

While the content and design teams worked on producing the book, the fundraising team researched printing options and figured out how to pay for it. They employed several fundraising methods, including partnering with Lexington businesses Blue Sky Bakery, Pronto Gelateria and Tonic Restaurant on special deals for which a percentage of the profits went to the book. They also promoted the campaign on social media and sent letters to potential donors in the community.

“There’s always the classic route of sending a letter to ask for a donation,” Monroe said, “but if you can get more people involved, it feels like a bigger contribution from the community and the school. You can get a lot of little donations and support from a multitude of people by being more creative with your options.”

Related: This bioplastics entrepreneur from Washington and Lee University is helping save the world from plastic waste

The fundraising team’s goal was $650, which, at $7.50 per book, would allow them to print about 85 books. Several weeks before the end of term, they had already raised more than enough to print the books and pay for shipping, with a bit left over to donate directly to Project Horizon.

The entire class carpooled to Project Horizon on Nov. 12 to deliver the books, and everyone saw the finished product for the first time. Kaufman considers the project a success and looks forward to sharing the books with clients.

“I wasn’t sure how daunting this project would be for the students, but I was impressed. I couldn’t believe that they took something we’ve been working on for a while and truly expanded on it, including things I would never have thought of including,” Kaufman said. “They really went above and beyond what I was expecting them to do, and they are just so hardworking. They took the information I gave them and used it to make a wonderful book that’s really going to enhance the lives of the people I work with.”

For the students, the project greatly enhanced the lessons they learned in the class, but it was also personally fulfilling.

“I’ve been challenged and learned to do things I’ve never done before, so it’s been a great learning experience,” Berry said, “And it is an amazing cause. It feels like we’re doing really important work, so I’m proud of that.”

This article has been edited slightly from the original version appearing on the Washington and Lee University website.