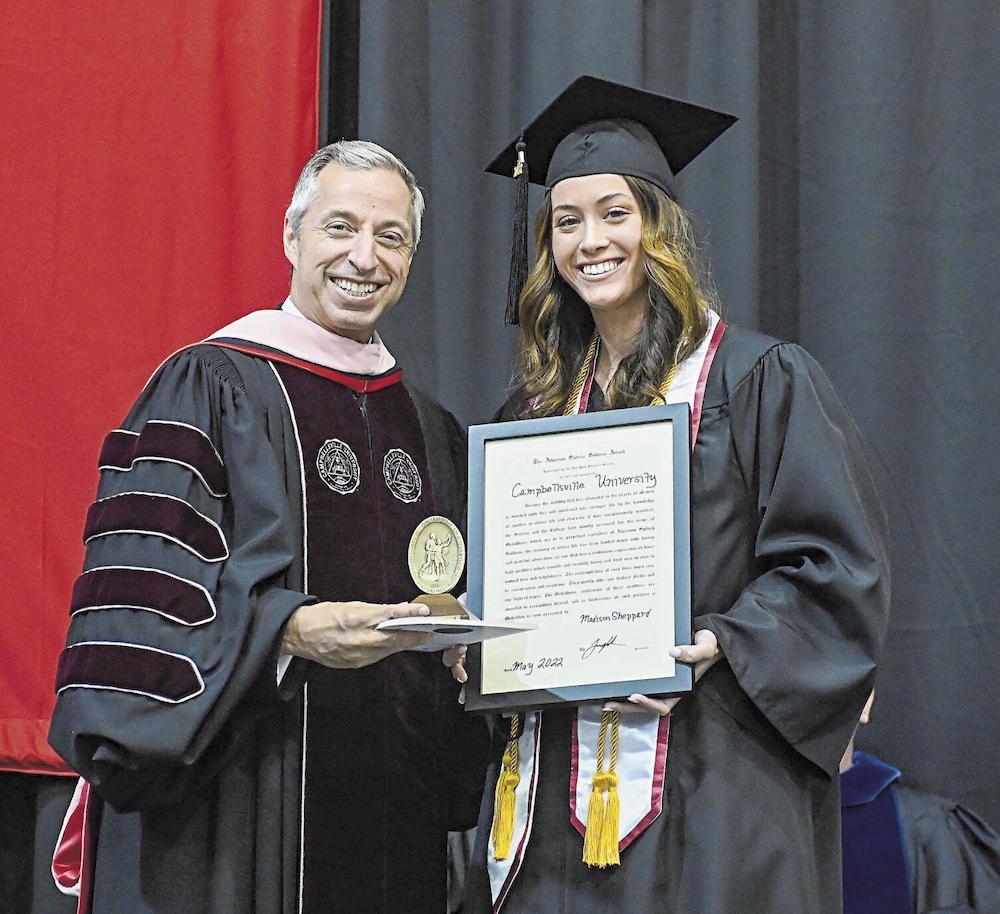 Basketball is in Madison Sheppard’s blood, coursing through her veins on a strong undercurrent of service to others. On May 7, along with the honors she’d already earned as a scholar-athlete on the Campbellsville University women’s basketball team, she received the Algernon Sydney Sullivan Award for her commitment to making positive change in a challenging world.

Sheppard was the student recipient of the award, while the community award went to Dr. Heather Hood Wise, the owner of Wise Dentistry for Kids in Campbellsville, Ky.

Sheppard graduated in May with a degree in chemistry and a business administration minor at Campbellsville University.

“Throughout my life, I have been surrounded by a family and a community that taught me life lessons that I want to continue to live out and instill into those I encounter,” Sheppard said in a CU press release.

Sheppard grew up in Laurel County, Ky., and is the daughter of Jeff Sheppard, a basketball star at the University of Kentucky from 1993 to 1998. Her younger brother, Reed, also plays basketball at CU.

Sheppard played basketball at North Laurel High School in London, Ky., before being recruited to CU.

In high school, she said, she learned the “power of teamwork, communication and submission to authority.” In her senior year, she helped lead her Lady Jaguars team to a district championship.

“As a little girl, I was always drawn to Campbellsville, and I didn’t know why,” Sheppard told the Sentinel Echo after signing to play with the Lady Tigers in December 2017. “When I started looking at different colleges, Campbellsville always kept coming back. There was just something about the school that drew me to it. When I got an offer, I knew it was what I had to do.”

At CU, she learned to balance her time, energy and focus through academics and athletics. “The leadership of my coaches and administration at CU, along with my senior teammates, taught me once again how to grow in this new environment,” she said.

“The highlight of my college career, though, was attending a mission trip to Belize in Central America,” Sheppard said. “It was on that trip that the confirmation of my calling to serve on the mission field in some capacity was confirmed.”

“I have learned that true fulfillment comes from pouring into my younger teammates and helping them reach their goals and desires,” Sheppard added. “I’m looking forward to taking the next step into my life, which I realize will be challenging. However, God has been preparing me for this moment from the very beginning. I am excited to stay on the path that the Lord has paved for me.”