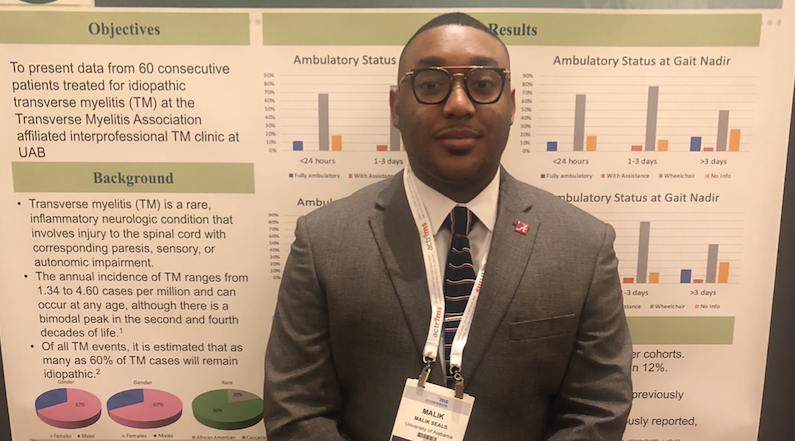 Malik Seals wants to be the scientist who cures multiple sclerosis—not for fame or glory, not for money, but for his mother.

As a youngster, Seals, now a biological sciences major at the University of Alabama, watched his mom, Danyell Smith, wage a difficult battle against the unpredictable but potentially debilitating disease for years. The Columbus, Mississippi native resolved that he would equip himself with the skills needed to eradicate MS, and he has been following that path ever since.

It has also been a path of leadership and service to others, earning Seals the prestigious Algernon Sydney Sullivan Award (along with fellow winners Alexus Cumbie and Dr. Kathleen Cramer) at UA for 2020 as well as positions like president of the National Pan-Hellenic Council, vice president of Alpha Phi Alpha Fraternity and UA’s first Movember Student Ambassador, raising awareness of men’s mental health, suicide prevention and prostate and testicular cancer. 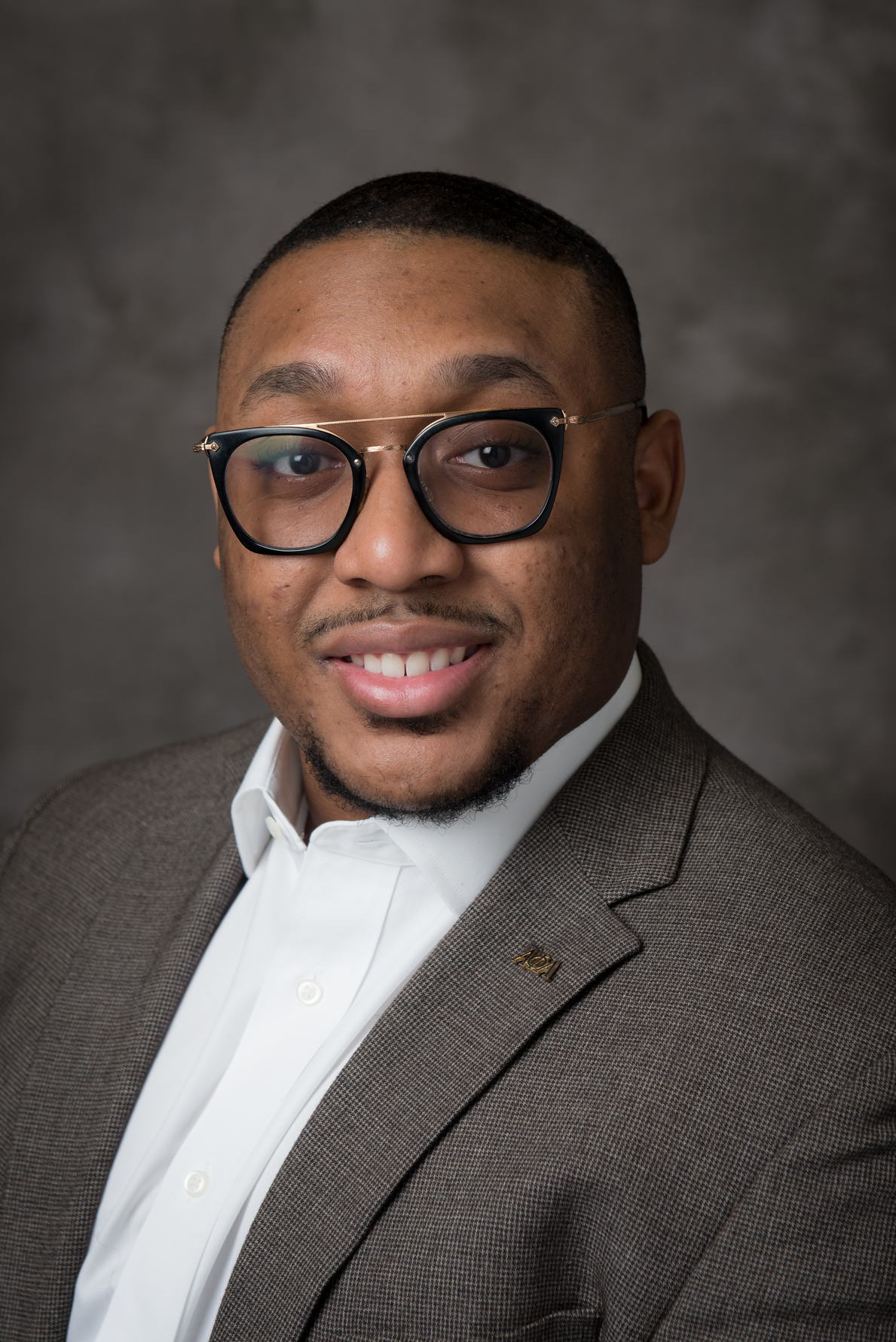 But Seals knows he still has a long way to go. His next stop on the path: graduate school and the study of microbiology and immunology. After that, he plans to earn his Ph.D. in neurobiology.

Seals has been drawn to medical research ever since his mom was diagnosed with MS in 2011. “The diagnosis caused a swift paradigm shift in the lives of everyone that cared for her, but it hit me especially hard,” he recalled in an email interview. “I watched a once cheerful and exuberant woman have her smile taken from her.”

“Experiencing firsthand her battle with the disease brought forth vacillating emotions as I often experienced bouts of anger and frustration exacerbated by periods of acute sadness,” Seals reflected.

Over time, his mother adjusted her lifestyle in response to MS, and Seals found that the diagnosis changed him, too—for the better.

“I viewed MS as a curse,” he said. “Contrarily, it provided me with an unwavering resolve to face seemingly insurmountable challenges and the desire to provide advocacy to anyone in need. Presently, looking back, I am thankful for my mother’s diagnosis in a seemingly paradoxical manner because the worst time of my life ingrained me with my most invaluable character traits. In fact, my mother’s diagnosis allowed me to gain a deeper emotional intelligence and level of selflessness that I don’t think would have been feasible had I not witnessed my mother’s struggle.”

Having discovered his calling through his mom’s fight with MS, Seals developed a long-term plan and an even longer-term plan. As he pursues his Ph.D., he said, “My goal is to study the pathophysiology of neuroinflammation and autoimmune diseases, both of which are underlying causes of MS. As of now, I would love to work for a biotech company researching novel therapeutics for patients suffering from MS and related diseases. Eventually, I’d hope to open my own biotech company specializing in biopharmaceutical therapeutics for patients living with neurodegenerative and autoimmune diseases.”

He’s certainly off to a good start. Some of his research on MS has already been published in the  Journal of Neurology and earned him the honor of presenting at a major international conference on the topic, the Americas Committee for Treatment and Research in Multiple Sclerosis, in February 2019. He presented his research on transverse myelitis, a rare neurological condition—clinically similar to MS—that involves injury to the spinal cord. “Our research discovered that more women were affected than men in our respective patient cohort, and the outcomes are likely more favorable than the literature previously reported as it relates to ambulatory status”—that is, the patients’ ability to walk.

“To speak at the conference as a 21-year-old senior in college was not only an incredible opportunity for an aspiring scientist but an emotional moment as well,” Seals said. “As a young scientist, you dream of having respect from the leaders in your field, and to have so many respected leaders in the field presenting their research in the same room as I was not only humbling but inspirational.”

When he’s not hitting the books or hunkered down in the laboratory in his quest to make scientific history, Seals finds other ways to make a difference at home, on campus and even in the nation’s capital.

Related: This Sullivan Award winner beat breast cancer and helps other black women do the same

“One of my first experiences with service was as an assistant team leader for the Center for Service and Leadership [at UA],” he said. “I was allowed to lead a team of students and chaperones to Washington D.C. under the D.C. Young Readers Program.  Seeing how much of an immediate impact we had on the community was incredible. Admittedly, it was a small impact, but I definitely do not want to minimize the work we did with the students because they genuinely lit up seeing that they had mentors.” 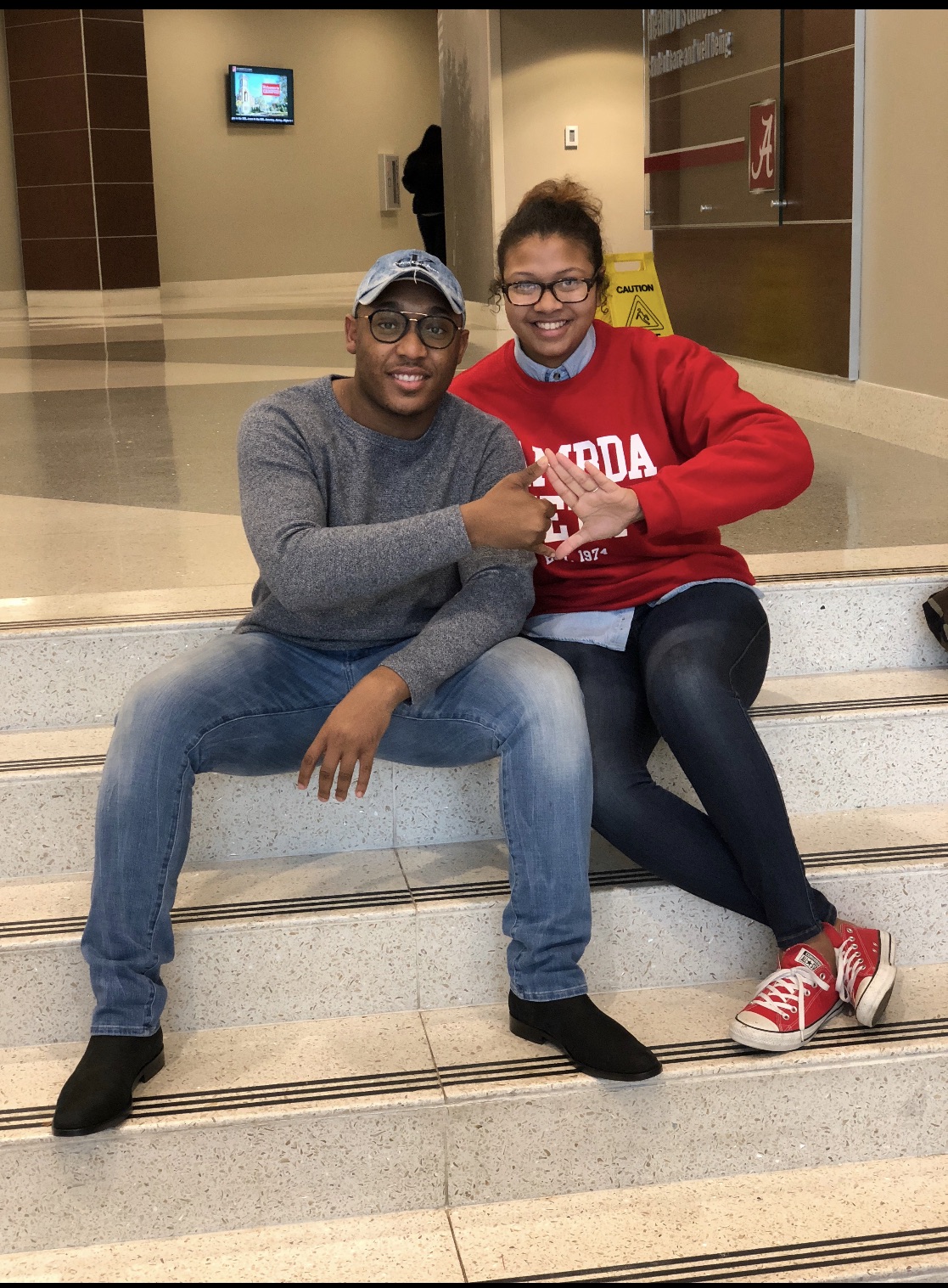 Brianna Brown (right), Malik Seals’ longtime girlfriend, sparked his passion for serving others when they were still in high school.

Seals said his girlfriend sparked his interest in service to others back in their high school days. “I’ve been with my girlfriend for the past seven years, since my sophomore year in high school, and she has served not only as an inspiration but as an anchor during the hardest moments in my life.”

And his mother continues to inspire him, too—her MS has been in remission since Seals’ birthday six years ago. “Of course, the disease was hard on my mother,” he said. “However, her dauntless personality would not allow her to succumb to the illness, and this served as the anchor for her empowerment and fortified her ability to adapt. Eventually, she evolved to see the obstacles in her path as opportunities and found innovative solutions to surmount them. Progressively, her embitterment towards the disease transformed into an inexplicable dedication to proving those who doubted her ability to thrive wrong.”

No one should doubt her son’s ability to thrive—and succeed—either. Seals said he thinks he’s only the second African-American man in UA history to receive the Sullivan Award. And he wasn’t even convinced that he deserved to win it. “In fact, after receiving the call that I had won, I was in denial for nearly the next three hours,” he said.

UA also honored an African-American woman, poet and scholar Alexus Cumbie, with the award—something that no one expected, Seals said, “as this is the first time that it has ever happened” at UA.

Winning the Sullivan Award, he added, “means that I have to continuously strive to live up to the Sullivan name because his life was truly inspirational. Sullivan’s uncanny ability to stand grounded in his belief in the face of adversity, while simultaneously advocating for those that were in need—regardless of a difference in opinion—is what I would describe as true leadership.”