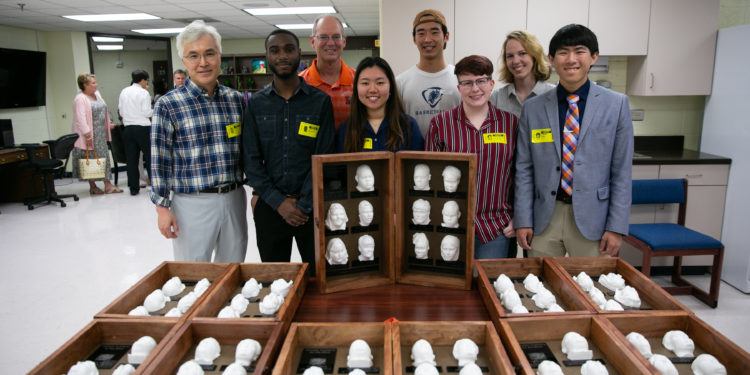 Having a high school yearbook is something that most of us probably don’t think twice about. We flip through the pages whenever we want to see our former classmates and reminisce about our graduation year.

A team at Sullivan Foundation partner school Mercer University has created a keepsake product to help visually impaired students remember this life milestone. On May 1, Dr. Sinjae Hyun and Dr. Scott Schultz with Mercer’s School of Engineering and several of their students presented “Touch3D Yearbooks” to graduating seniors at Georgia Academy for the Blind (GAB).

“It’s something that the visually able take for granted, being able to see family members, friends. I wanted to be a part of something that gives that to visually impaired students as well,” said Jordan Brewton, a sophomore biomedical engineering major who helped manage the project.

This is the second year Mercer has made these custom yearbooks, which feature 3D-printed face models of the graduates, for the Macon school. The project is supported by funding from Mercer’s Research That Reaches Out initiative.

Dr. Hyun, professor of biomedical engineering, said he found inspiration for the project during a workshop in South Korea in December 2016. A presenter talked about a bust model that was built for a blind high school graduate, which led Dr. Hyun to begin brainstorming how something similar could be done using technology at Mercer. 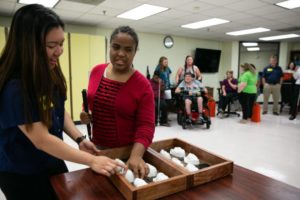 He connected with GAB Superintendent Dr. Cindy Gibson and pitched the idea of the 3D yearbook. The Mercer team used a 3D scanner to scan the faces of seven Class of 2018 graduates, printed head models using a 3D printer, made boards to display the models on, and gave a yearbook board to each of the students.

“The idea was perfect,” Dr. Gibson said. “This is their project, and they do this for us. We get the benefit. I think it’s very exciting, and I think it will be a major keepsake (for our graduates) for the rest of their lives, just like we save our yearbooks.”

The Mercer team had to rethink its strategy for this year’s 3Dyearbook, since GAB had 11 students graduating. It would take too long to produce all the head models using last year’s method, and this year’s yearbook would need two boards to represent all the students, Dr. Hyun said.

Dr. Schultz, associate dean of engineering and industrial engineering professor, helped Dr. Hyun come up with a solution. They 3D-printed the 11 heads, created silicone molds of them and then cast them.

They were able to make all of the heads in about eight hours, compared to the minimum three months that would have been required using last year’s method, Dr. Schultz said. They created hinged wooden cases that open to display five students and the GAB logo on the left side and the other six students on the right side. The students’ names are included in braille and regular type. 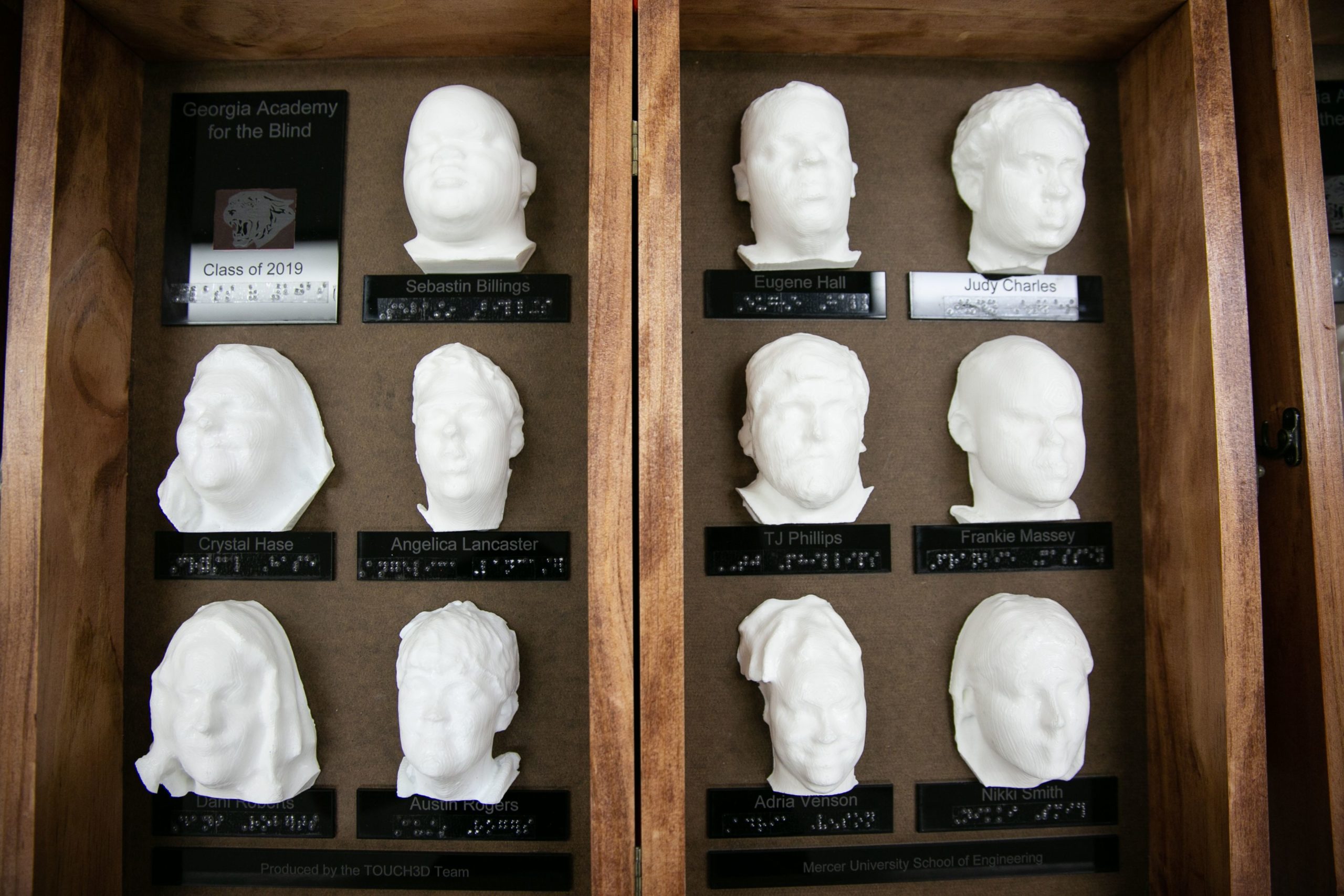 The 3D yearbook features face models of 11 Georgia Academy for the Blind Class of 2019 graduates inside a wooden case. (Photo by Chris Smith)

Thirteen Mercer students were involved in the project during the fall 2018 semester, when they designed a production manual for the yearbook. For the spring semester, 17 students used the manual to create the product, Dr. Hyun said. Sarah Spalding, a freshman biomedical engineering major, said she enjoyed being a part of the process from start to finish, from the scanning of the faces to the building of the cases.

“It was definitely a valuable experience,” said Michelle Jung, a freshman industrial engineering major. “All the cases were constructed by us, hands-on, and each of them are unique in their own way.”

The plan is to share the manual with schools and centers for the visually impaired across the United States so they can create yearbooks for their graduating seniors, Dr. Hyun said.

“In the beginning, I just tried to apply this 3D technology to the blind community. Then I saw those responses, how they accept this as a good approach. It felt really great,” he said. “I’m a really lucky guy with these dedicated students. Mercer has a great student community.”

On May 1, the graduating seniors at GAB felt the molds inside their new “Touch3D Yearbooks.” They were all smiles as they found their own faces and identified their classmates. GAB student Austin Rogers said he loved his yearbook and planned to display it on a shelf in his bedroom.

“I think it’s great because we could feel people’s faces versus actually seeing them,” said GAB student Judy Charles.

The project has become a part of the Mercer On Mission (MOM) South Korea experience. In addition to teaching English and robotics to children at the Drim School, the MOM team members created 3D face models of two staff members at a nearby center for the blind during the 2018 trip.

For this summer’s MOM trip from May 16-June 15, they will create 3D family photos for blind residents at the center and also make 3D yearbooks for graduating seniors at a local school for the blind. The Mercer team will teach the Drim School students about the scanning, modeling and printing process so they can continue the project after they leave the country.