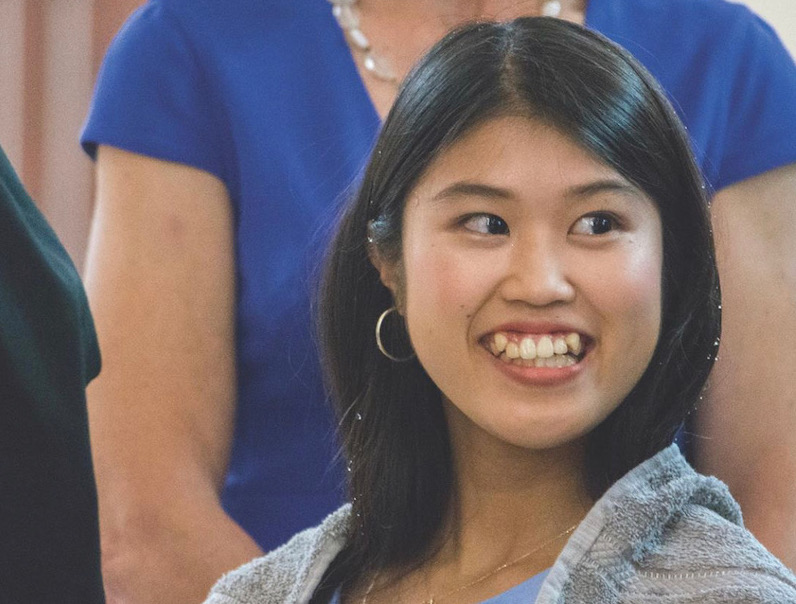 Buddhism is known for its famed proverbs, short sayings that shine light on a truth or piece of advice followers should live by. Though Shiotani was surrounded by these proverbs, she recently learned one Christian proverb which would encompass her life experiences: “Trust in the Lord with all your heart, and lean not on your own understanding; in all your ways submit to him, and he will make your paths straight.”

It all started with an internship that combined Shiotani’s love for political science and public service with the United Methodist Church (UMC). “I was looking for an internship around December 2018,” she said. “I started making connections on campus. Rev. Kelli Taylor and I casually talked about the things I was passionate about, which is helping people in the public sector.”

Rev. Taylor, MU chaplain and vice president for community engagement, thought the General Board of Church and Society internship program through the UMC would be a perfect fit. 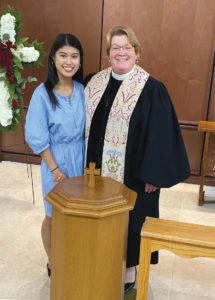 “Tomomi arrived at my office late one afternoon,” Taylor said. “While she had applied for a few internships and had been accepted to all but one, Tomomi had a sense something was missing. She was anxious and feeling the pressure of the looming deadline and her decision. I asked her to take a deep breath and tell me a little about herself and the vision for her life. It was immediately apparent Tomomi wanted to use her academic knowledge for compassion in the world and for social justice.”

So, two days before the deadline, Rev. Taylor and Shiotani worked together to complete the application. A few months later, Shiotani was one of eight students selected as an Ethnic Young Adult Intern. Shiotani felt a range of emotions when she learned she was accepted.

“I was nervous but excited,” she said. “I was stepping into the UMC community for the first time, so I was nervous if I could present myself well since the other interns were probably raised in church. The only time I was exposed to Christianity was in a Catholic school when I was growing up.”

“Over the next several months, Tomomi and I spent hours and days talking about faith, the Wesleyan tradition, vocation and calling, in preparation for her GBCS internship,” Taylor added.

Shiotani’s mother enrolled her in a Catholic school in Japan when she was seven years old. At the school, Shiotani learned not only a basic education, but how to live a Bible-based life. “I stayed in that school for 12 years before coming to the United States. It was a foundation of Christian education that I never paid attention to,” she admitted. “I started connecting the past and present and saw how God was guiding my paths even then.”

But God’s guiding hand didn’t stop there. As it turns out, Shiotani was able to make an impact on social and political policies she was passionate about.

During her internship, Shiotani worked Monday through Thursday as a policy intern for Church World Service. She drafted letters, lobbied, organized press conferences, and attended rallies and marches.

On Fridays, she and her fellow interns attended workshops on various topics such as the LGBTQ+ community and elder rights. On Sundays, each intern would travel to different churches in the Maryland and D.C. areas to learn about church culture. 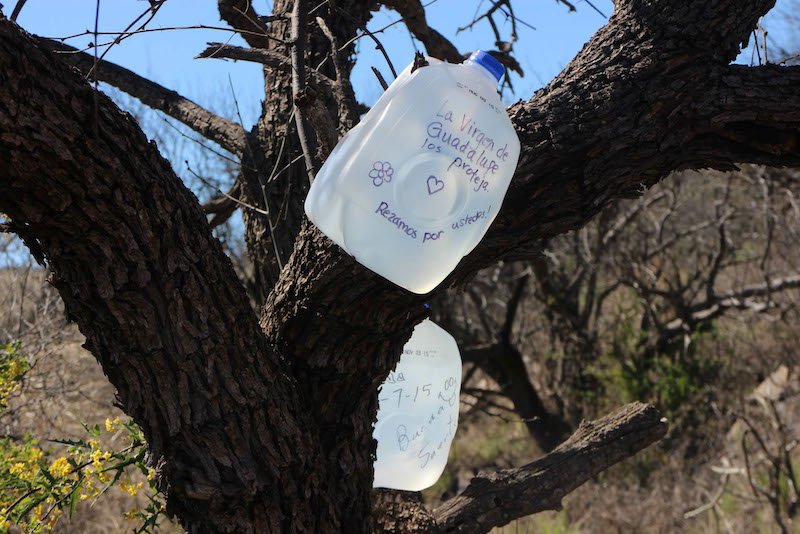 The intentional destruction of water bottles left for immigrants on the U.S. southern border led Shiotani to identify with refugees on an emotional level.

Shiotani spent much of her time focused on human rights issues at an executive level. She vividly remembers researching the treatment of immigrants at the U.S. Southern border, a hot-button issue that has been in the headlines for years. She realized God had a plan for her life when she remembered a trip while studying at the United World College (UWC), before her MU Journey.

“When I was in school at UWC, I visited the U.S. Southern border and heard stories from immigrants and officers,” she said. “I walked the same path as the immigrants did. While I was walking the path, I saw water jugs with messages written on them in Spanish. I saw on the news recently these same bottles are being broken by border patrol officers because they don’t want the immigrants to survive.”

“I wouldn’t call myself an immigrant or refugee who has gone through hardships to be here,” she continued, “but I am on a visa here. I’m not integrated fully into the American society, so I can relate to immigrants in that way.” 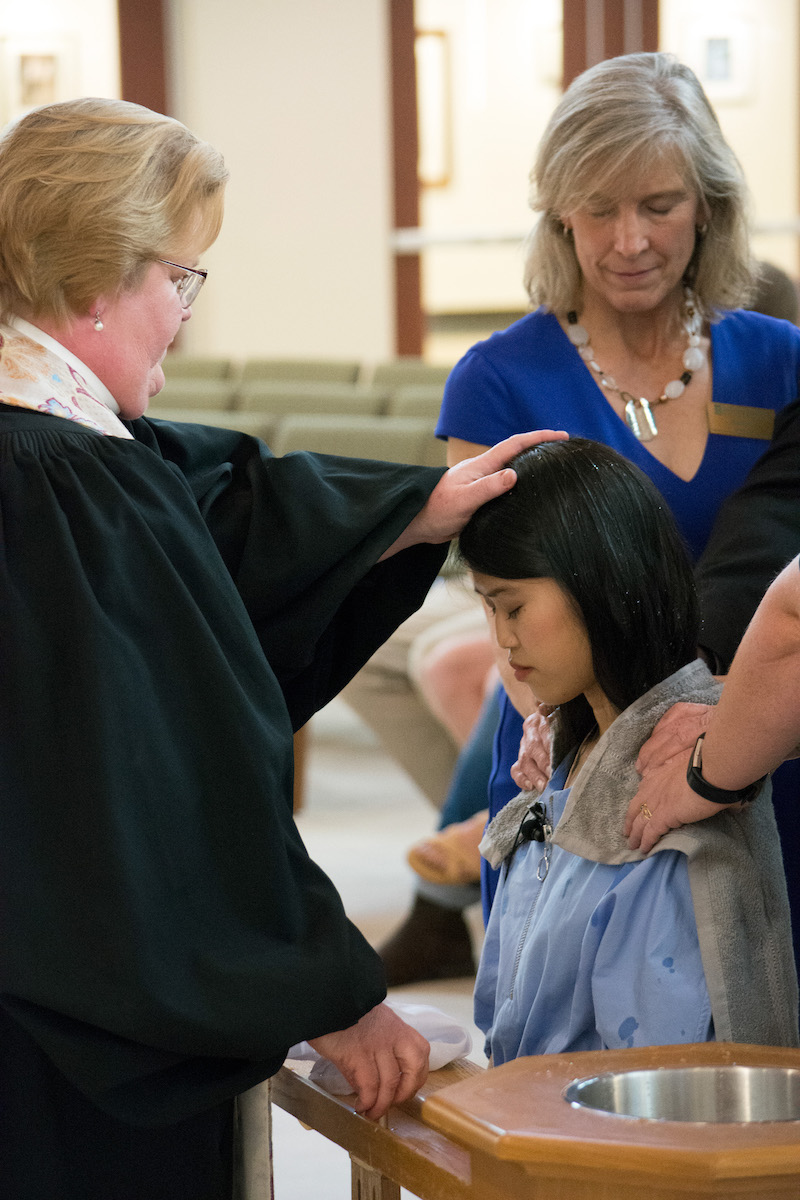 Rev. Taylor baptized Tomomi Shiotani in a special chapel service during the fall of 2019.

After she completed her two-month internship, Shiotani returned to MU and began communicating more with God. In the fall of 2019, she was baptized during a special chapel service. “Rev. Taylor and I sat down and planned how the whole service would go. It was so nice of her to let me plan what the service would look like. I got really emotional during my baptismal service,” she said. “I felt welcomed after seeing the faces of faculty, staff, and students who came to support me during the service.”

Shiotani was surprised to see her name written in Japanese on the front of the program.

Related: This Houston organization aims to break the school-to-prison pipeline for disadvantaged youths

For Taylor, baptismal services have been a special mark in her career as a chaplain. “Throughout my life, God has given me the grace and privilege to be in that moment when many people said ‘yes’ to baptism and a life of faith,” Taylor said. “Since coming to Methodist, I have baptized four other students and one staff member’s child. The privilege and joy of being a part of someone’s life at such a critical moment, and a joyous one, never fades. Being present at those critical moments is at the core of my calling as Chaplain.”

After graduating in May, Shiotani has chosen to stay in the U.S. and attend seminary.

Shiotani’s experience is one that MU’s Department of Religious Life hopes will extend to all of the university’s students.

“We often use the term MU Journey, and there is a specificity to one’s journey at Methodist University,” said Taylor. “But the university, and Religious Life at the University, are just segments of a larger journey of life, like threads in a tapestry. God weaves these threads together for good for those who seek God. The mission of Religious Life at Methodist University is to give students an opportunity to discover those threads, see how they work together for good, and to see everything in their lives as part of that spiritual tapestry.”

This article has been edited from the original version appearing on the Methodist University website.