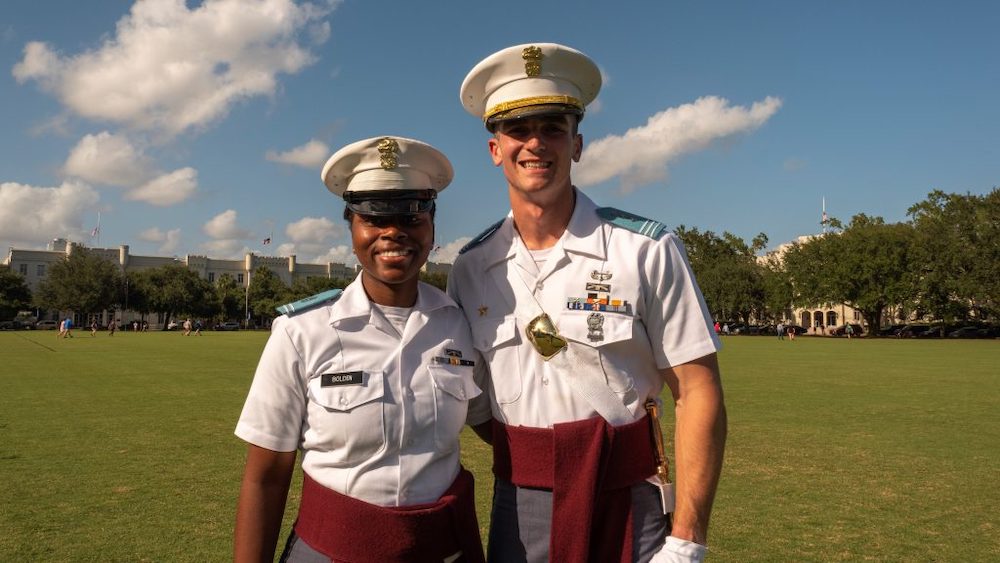 Cadet Colonel Richard “Ben” Snyder, the regimental commander for the class of 2020 at Sullivan Foundation partner school The Citadel, took a long, long walk to nowhere earlier this month—around and around on a circular track for 24 hours nonstop. The project’s stated purpose was to generate funds for the International African-American Museum in Charleston, S.C., but, for Snyder, it also served as a journey into empathy, understanding and compassion—and a chance to raise awareness of why so many black Americans and their allies are protesting in the streets today.

“I chose a track to replicate the monotonous walk felt by peaceful protestors as they search for a means to an end,” Snyder explained in a post for the GoFundMe campaign. “I wanted to do something simple, tangible, peaceful and positive for the African-American community in a city that means a lot to me.”

Snyder said he decided to raise money for the International African-American Museum on the advice of a friend who “feels preserving and teaching African-American history will lead to progress.” Although he did not set a specific fundraising goal, the project raised $2,590.

Snyder, a native of Winter Park, Florida, majored in Business Administration at The Citadel and rose to the top of the school’s cadet ranks in his four-year tenure there. A commission with the U.S. Army awaits him after graduation. 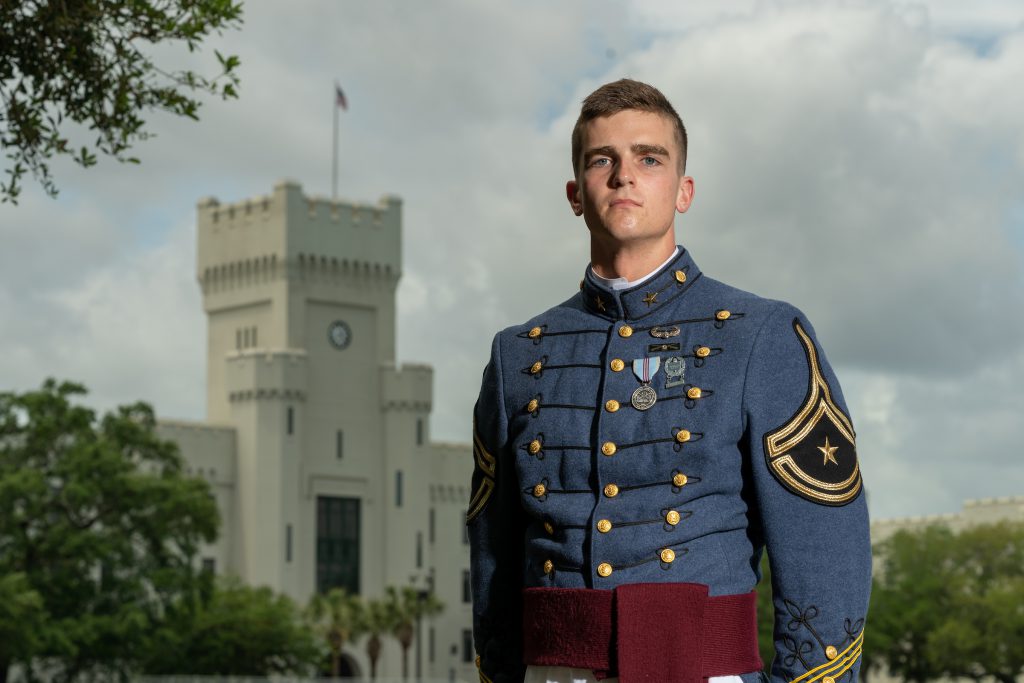 Cadet Col. Richard “Ben” Snyder served as regimental commander for the class of 2020 at The Citadel.

In an interview published last fall on The Citadel’s website, Snyder called on his fellow cadets to live a life of servant leadership. “I wish more people lived to serve others rather than themselves, according to the servant-leader model we learn about here at The Citadel,” Snyder said. “I believe too many individuals are focused on themselves, therefore crippling parts of our society.”

After talking the talk, Snyder walked the walk of servant leadership months later with his fundraiser, which he dubbed “24 Hours for Charleston.”

“I think being alone with my thoughts, going in circles for 24 hours, will allow me to empathize with African-Americans that have walked for generations, have felt alone, and still not arrived at any final destination,” Snyder wrote prior to the day of his walk. “It is important to me because I believe this is a simple way any young man or woman can be a part of the solution—by looking for an opportunity to be there for a neighbor, a friend, or even a stranger that has been mistreated.”

Snyder said he ultimately walked a little over 56 miles in the 24-hour period without ever leaving the track. But the project was as much an exercise in empathy as a workout for his body, as he explained in a summary of the journey.

“I tried to put myself into the shoes of others and empathize with their circumstances as well as their perspectives,” he wrote. “I walked in boots, I walked in the rain, I walked barefoot through the briars and glass on the field, and I walked in my shoes. I tried to understand what it would be like to live as an oppressed African-American growing up in communities with unequipped local public schools, growing up with divided households where siblings sometimes have to raise each other while the mother works, growing up with racism in the more common moments that often go unnoticed by the rest of society, and the more extreme moments that have compelled millions to begin their own long walks for equality. I also tried to understand what it would be like to be a good police officer having to go home to his/her family each day and explain to his children why there are people burning their cars or why there are people villainizing their father/mother. I even tried to understand how a racist arrives at their point of view of the world.”

At the 4 p.m. mark of the walk, he said, “I felt nothing. There was no sense of accomplishment and no moment of validation for the miles I had walked. I would walk lap after lap, hour after hour, with my head looking down at my feet only to look up to see I was in the exact same place as I was the last time I had looked up. I imagine that is what it feels like as an African-American [who] has walked for hours and protested, only to go home in the evening feeling as though nothing has changed.” 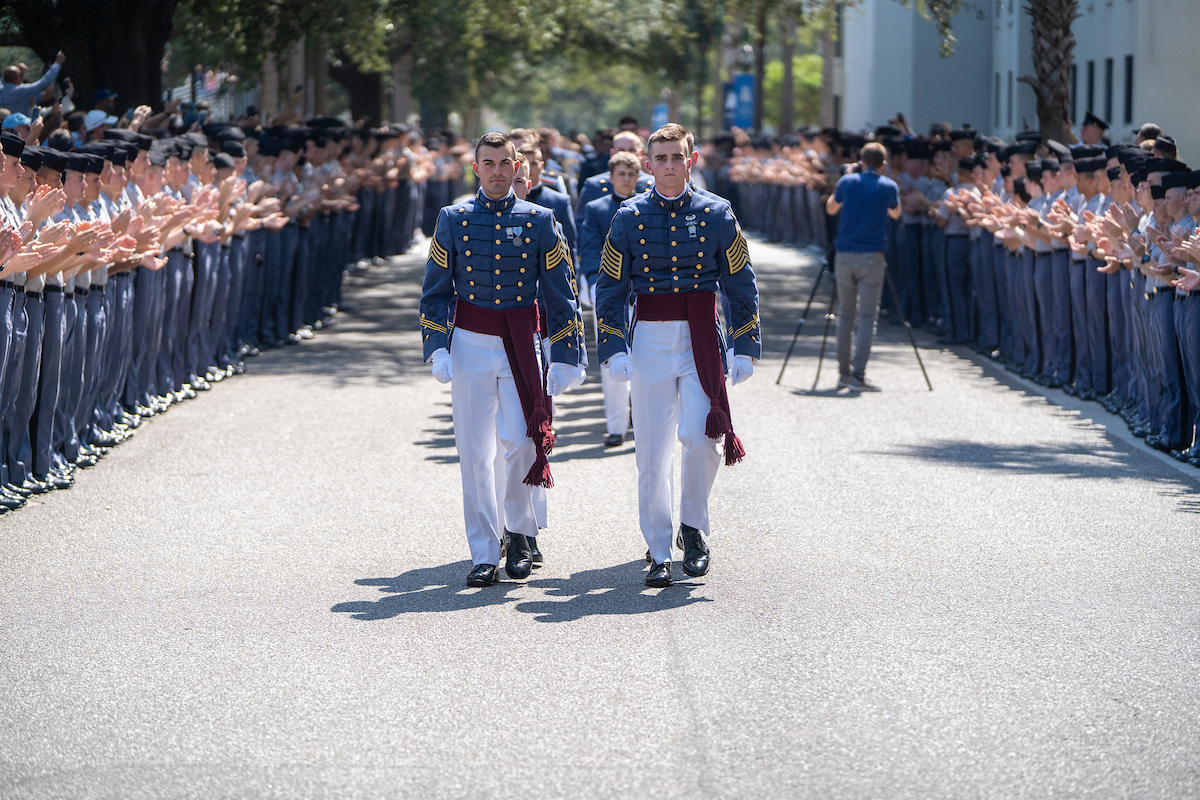 “No one has the right to tell a group of oppressed people how to protest—absolutely not,” Snyder continued. “But when I see a group of people come together and greet hatred with open arms, when I see African-Americans overcome every challenge life throws at them, surpass the odds, and still accomplish goals with such humility, knowing there are other people who did the same thing only working half as hard—it leaves me in awe. I don’t think there is any better depiction of what it means to be a Godly man or woman.”

Snyder ended his post on an optimistic note. “Maybe one day we will walk our final lap,” he mused. “One day we will walk as a society, turn the corner, and see a blue ribbon in the distance, a moment of validation, a sense of accomplishment—a finish line where all people are equal. But until then—we will walk. Never quit. Never compromise your character for the actions of lesser people. Never lose your joy. But, most importantly, know there will always be people that you will never know willing to walk with you and for you until their bones break—that you are never alone.”