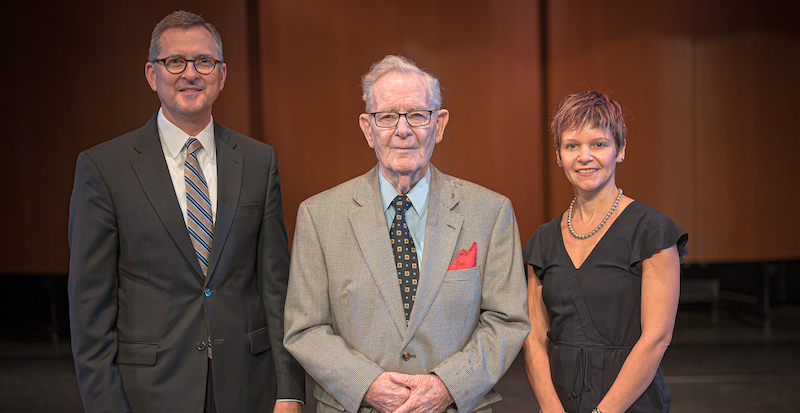 P.L. “Roy” McCall of Society Hill, S.C., a 2013 recipient of the Algernon Sydney Sullivan Award from Coker University, passed away at the age of 91 earlier this month after a brief illness. McCall, an alumnus of Sullivan Foundation partner school Clemson University, was also a dedicated supporter and benefactor of Coker, another Sullivan partner school.

The McCall family has been a part of the fabric of Coker since the institution’s early days. Roy McCall’s father, P.L. McCall, Sr., was a member of Coker’s Board of Trustees from 1939 to 1970. McCall’s mother, Belle Wolfe McCall, was a 1915 graduate of Coker College for Women.

McCall and his late wife Margaret, along with his twin brother, Reaves McCall (now deceased), were financial supporters of Coker University, particularly the music program, for decades. The McCall family supported Coker’s All-Steinway Initiative, which led to the university becoming an All-Steinway school in 2017. The McCall brothers also donated the indoor track in Coker’s Harris E. and Louise H. DeLoach Center in memory of their mother, who played on the basketball team during her time at Coker.

McCall was born on October 27, 1930. He and Margaret Bryant McCall were married 52 years before she passed away. He graduated from Hartsville High School (HHS) in 1949. His class was known as the “Fabulous 49ers,” being the first to complete twelve grades. He was also a member of the National Honor Society, Boys’ Glee Club, HHS Concert Band, and HHS Marching Band.

McCall earned his bachelor’s degree in agronomy from Clemson in 1953. At Clemson, he was a member of the Pershing Rifle Drill Platoon and won a Sears Roebuck Scholarship his sophomore year. He was listed in the Who’s Who in American Colleges and Universities in 1953 and served as Company C-4 commander during his senior year.

McCall attended officer’s training at Fort Benning, Ga. and went on to serve in the U.S. Army Infantry from 1954-1956. As a 2nd lieutenant, he provided basic training for recruits at Fort Gordon, Ga., and, as a 1st lieutenant, he was a member of the 506th Regimental Faculty at Fort Jackson, S.C.

Related: How Sullivan Foundation alumnus Sarah Scott discovered that special education was her calling in life

Over the decades, McCall generously supported both Clemson and Coker through various endowments, gifts and scholarship funds. He received the Algernon Sydney Sullivan Award from Coker University in 2013 for excellence in character and service to humanity.

As a Clemson alumnus, McCall, who rarely missed a Tigers football game, funded the Peter LeRoy “Roy” McCall Jr. ’53 Scholarship Endowment for students in the College of Agriculture, Forestry and Life Services. Additionally, he supported Clemson’s Scroll of Honor and Military Heritage Plaza, the WestZone project in Memorial Stadium and the Class of 1953 Golden Anniversary Scholarship Endowment and donated to the President’s Fund.