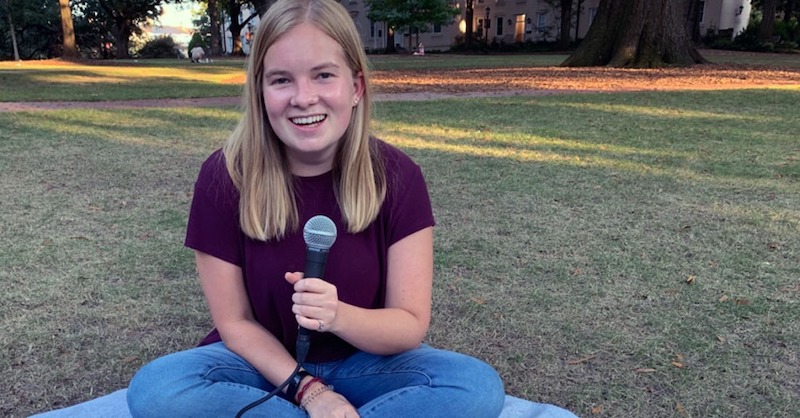 Jack Gabel was a changed man when he returned from Cyprus in 2018. That was the year the former Truman Scholar finalist from the University of South Carolina, a Sullivan Foundation partner school, spent time living on the tiny Mediterranean island as part of a U.N. project to create a medical clinic for orphan refugees. While he was there, he got to know some of the refugees pouring in from war-ravaged Syria and beyond.

“When I came back home to South Carolina, I was inspired by these resilient people, and I wanted to continue working for the refugee community,” said Gabel, an Honors College biology major who graduated earlier this year. “I felt we could really make an impact by handing a microphone to a refugee or someone who spent a lot of time working with them and providing a platform where they could tell their own stories.”

It was a noble idea that might have gone the way of most good intentions, but Gabel connected with David Snyder, faculty principal of the International House at Maxcy, and with other students in the Carolina Global Scholars program at Maxcy, a living-learning community that focuses on global perspectives. Before long, he and Kevin Gagnon, a recent Algernon Sydney Sullivan Award winner, and a handful of other students had launched a podcast called Seeking Refuge, which shares stories from around the world about refugees and those who advocate for them.

“I think there are a lot of people who have a monolithic idea of refugees,” said Gagnon, who, like Gabel, has graduated but continues to collaborate with the current students running the podcast. “Their situations vary widely, and they are not a concept—they’re real people.”

“This has really opened my eye—I didn’t even realize that Columbia has a sizable refugee population,” said Aidan Thomason, a junior from Knoxville, Tenn., majoring in international studies and history and one of the podcast’s co-founders and current leader. “It’s been a process of learning about the stories of people who are right next door and all around you.”

That’s not to say that Seeking Refuge has focused only on those in its own backyard. The second season of the show was devoted to Clarkston, Georgia, which has been called the most diverse square mile in the U.S. because of its refugee population. The students drove there before the pandemic and captured a season’s worth of stories in one long day.

Recent episodes of the podcast, now in its third season, have featured interviews with individuals in South Sudan, Venezuela and Syria. 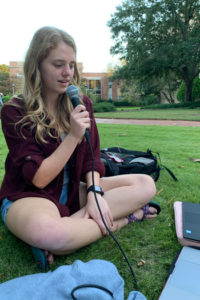 Jackie Burnett, a member of the Seeking Refuge podcast, records narration for an episode on the UofSC campus.

The Seeking Refuge production team, which has grown to more than half a dozen students, wants to do more than merely present engaging stories about refugees.

“It’s a rare opportunity, at least in the United States, to hear about refugees beyond just a short segment in the news,” says Gabel, who continues to advise students working on the podcast while he works on the COVID-19 response. “Our hope is not only for people to be inspired by refugees, but also to change hearts and minds about refugees themselves.”

The podcast recently passed 1,500 downloads and perhaps appeals most to other college students interested in global issues. “And that’s good because we’re at the beginning of having some influence on politics—and it’s good to change hearts and minds now,” Thomason says.

With some 70 million people having been forced from home by conflict and persecution around the world, Seeking Refuge won’t ever lack for stories to tell. The challenge will be to keep passing the baton to the next group of students. Thomason and Tyler Jackson, an international studies major and another podcast co-founder, are planning to study abroad when the threat of COVID-19 has passed.

“So I can’t say what will happen once we’re all gone,” she says. “But for the foreseeable future, we have a pretty sustainable podcast, and we’re going to keep amplifying the voices of refugees.”

This story has been edited from the original version appearing on the University of South Carolina website.