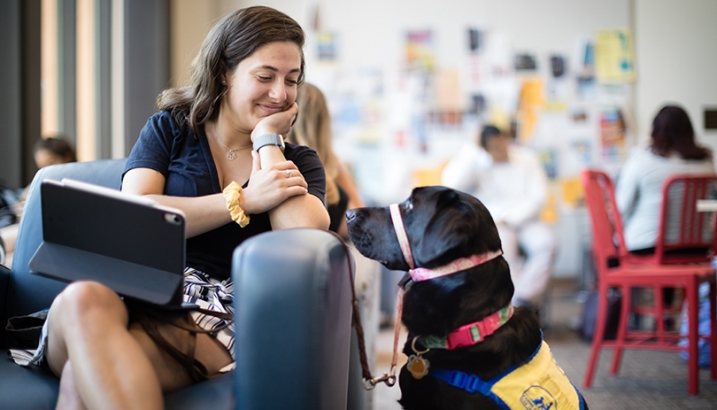 Plenty of dogs can roll over, fetch or shake hands. Ari, a black Labrador and golden retriever mix, can do a lot more than that. He has been trained as a service dog to help people with disabilities navigate their way through challenges that otherwise might restrict them from fulfilling their potential. And it’s all thanks to many months of work with Marissa Cobuzio, a 2019 graduate of Sullivan Foundation partner school Rollins College.

As a member of Rollins’ Bonner Leaders Program—a community-service initiative that pairs students with local nonprofits—Cobuzio spent the last year and a half of her time at Rollins raising Ari for Canine Companions for Independence (CCI). A nonprofit headquartered in Santa Rosa, Calif., CCI provides expertly trained assistance dogs free of charge to people who need them. The service dogs help adults and children with physical, cognitive and developmental disabilities as well as the deaf and hard of hearing.

As Rollins College explained in a recent story on its website, Cobuzio, who graduated with a double major in biology and sociology, worked with CCI to get Rollins approved as a service-dog-raising campus. She also coordinated with campus administrators to develop the infrastructure needed to continue the service dog program for future Rollins students. 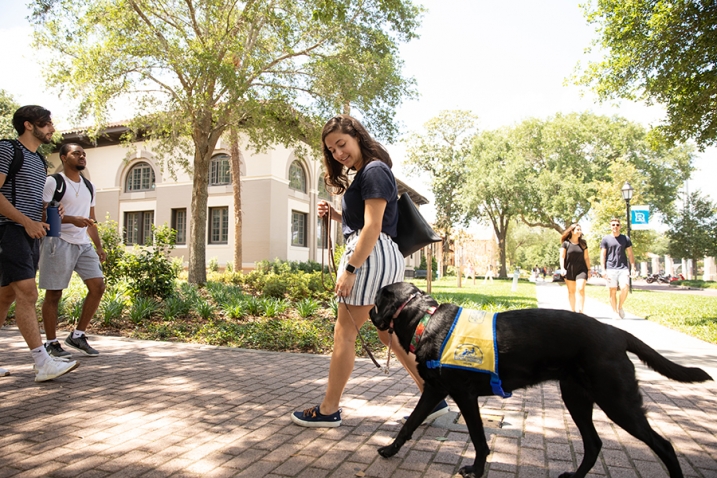 Marissa Cobuzio with Ari, a service dog that she trained to help people with disabilities. (Photo by Scott Cook)

After graduating from Rollins earlier this year, Cobuzio started at Cornell University’s College of Veterinary Medicine in August. The vet-in-training hopes to eventually work for a mission-based organization like CCI.

Cobuzio became a puppy trainer for CCI after volunteering in a pet therapy program at the AdventHealth for Children (called the Florida Hospital for Children at the time) in Orlando. “I had never really gotten to explore the animal-human bond in that way before,” she said. “I realized I wanted to shift focus in vet school more toward this route.”

While volunteering with the pet therapy program, Cobuzio met Rollins alumnus Bill Gordon, an experienced service dog trainer. They worked together to set Rollins up as a campus approved for raising service dogs. “There was so much thought put into it—making sure there’s housing on campus and a system in place for bringing dogs to classes, determining where the dogs can and can’t go, giving the people raising puppies the support they need,” she recalled. “It’s been a long ride, but I’m so thankful to everyone who helped make it a reality.”

Raising a service dog inspired Cobuzio to reconsider her own career goals. “It’s something I’m super-passionate about, and it has completely shaped what I want to do as a vet,” she said. “I wanted to be a wildlife vet for the longest time, but I’ve talked to several of the vets at CCI, and they do a lot of work with breeding. All the service dogs with CCI are bred in California, and they do a lot of genetic testing as well as just general research on dog longevity and quality of life. And there’s a mission behind it. That sounds incredible to me—not only doing your job but serving other people in the process.” 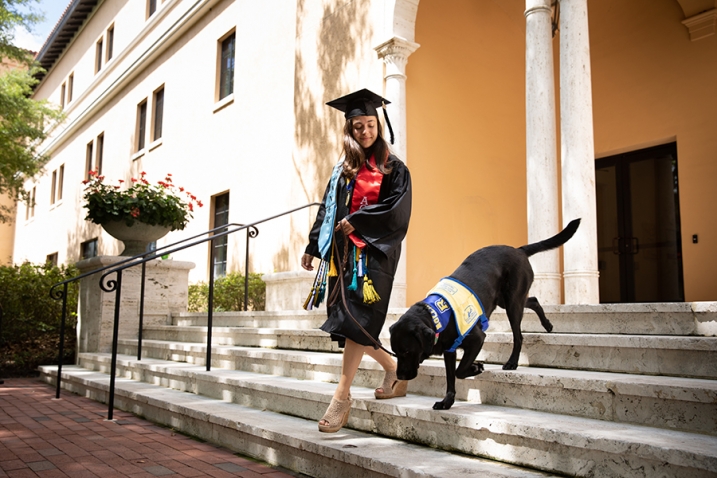 Service dogs like Ari help people with disabilities navigate challenges that might otherwise keep them from fulfilling their potential. (Photo by Scott Cook)

“I know now that I want to get a specialty in animal reproduction and work in service dog breeding,” she added. “It’s shifted my mindset about what I could do as a vet and how that could affect people.”

Service dogs are so smart, a golden retriever named Hollywood even earned a degree from Cobuzio’s alma mater. Rollins College awarded Hollywood, a service dog to Rollins Disability Service Coordinator Jon Viera, an honorary “dogorate” degree for “extraordinary service to a student” when Viera collected his own master’s degree in human resources in May 2016. Hollywood had been raised from puppyhood by New Horizon Service Dogs, another nonprofit specializing in training and matching service dogs with people who have disabilities.

Cobuzio said her education at Rollins prepared her for success at Cornell, one of the country’s most prestigious universities. “Rollins definitely taught me how to prioritize my time in an efficient manner and gave me the opportunity to be involved with so many things, like the Bonner program, a sorority, and being a puppy raiser for Canine Companions for Independence,” she said. “The rigor of the science department at Rollins taught me how to study effectively in order to not just remember concepts and regurgitate them on an exam, but rather to think critically through the information so that I have a working understanding of it long-term.” 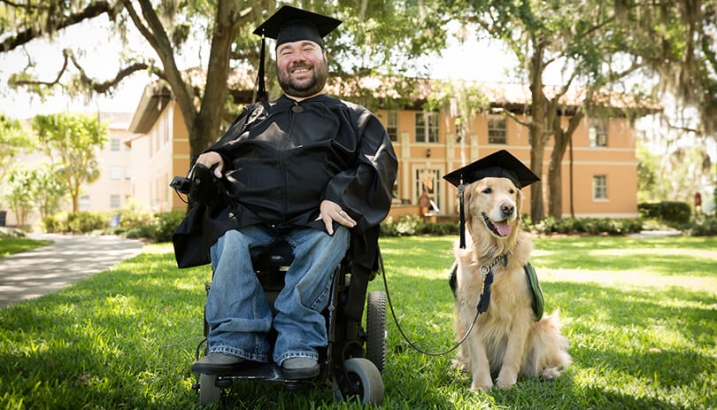 Cobuzio credited Rollins biology professor Jay Pieczynski with mentoring her in her journey to a career in veterinary medicine. “[He] helped me conduct mock interviews for vet schools, helped me research different programs, and helped me with requirements and getting an internship. He also encouraged me all along the way. He made a personal investment in me to make sure I was on the right path, which was huge. Bailey Clark [in the Center for Leadership & Community Engagement] was my supervisor in the Bonner Leaders Program and was so wonderful at making sure I was caring not only for my academic health, but also my mental health and focusing on the things that really matter. I also loved working with sociology professor Amy Armenia, who was my thesis advisor. She always encouraged me and made sure I wasn’t overworking myself.”

Her experience at Rollins, Cobuzio added, “educated me about the world in general, which I think is really important—not just for vet school, but for being a functioning human in the world. Also, applying to vet school and having them see that I wasn’t just focused on biology but on being a person in the world as a veterinarian was really important. You can’t just study something in isolation. That’s not how it works. Understanding all the different influences on what you want to study is important, and being in the honors program at Rollins did that for me.” 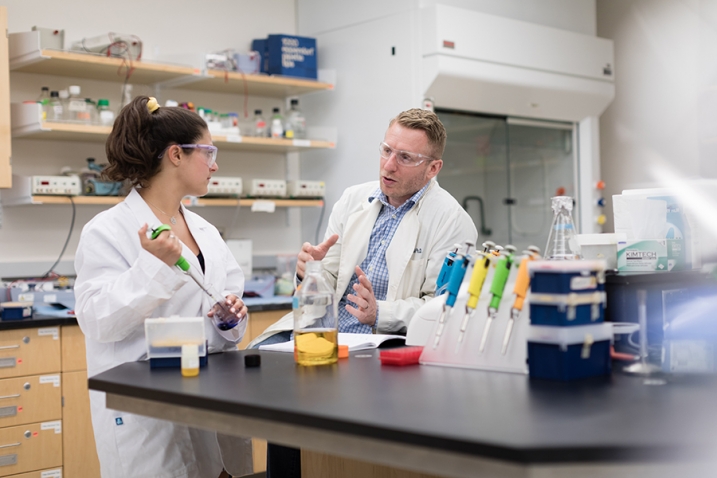