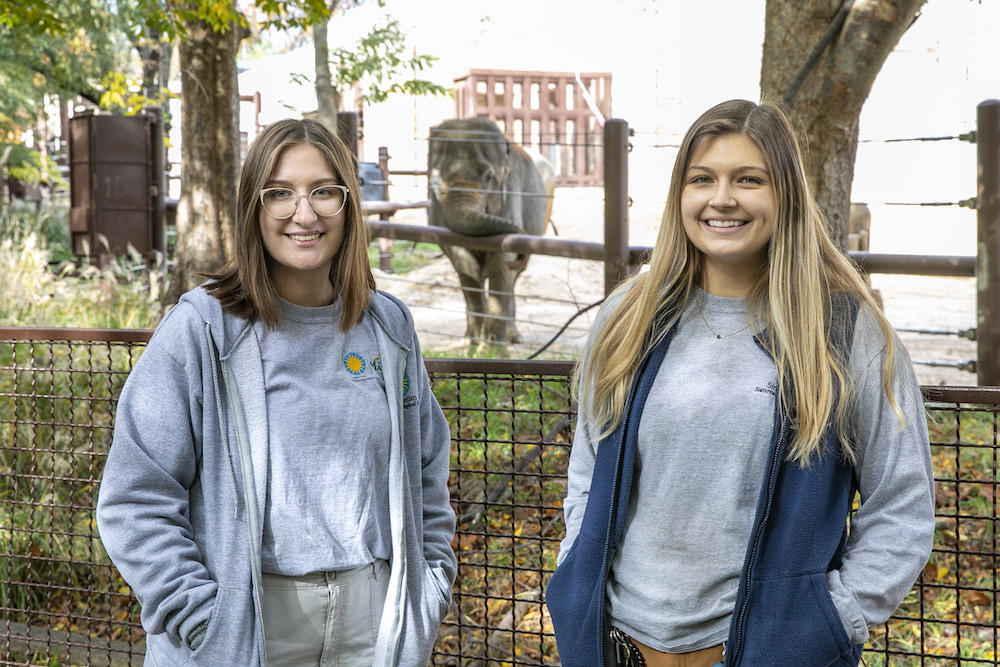 Because elephants only sleep three to four hours a night—and frequently wake during that time—their “beauty rest” is a precious commodity.

“Sleep is super-important for the elephants because they don’t actually do a lot of it,” said Fortner, who studied for a year at the Smithsonian-Mason School of Conservation (SMSC).

Noroski spent much of her time accessing footage from the Smithsonian’s camera system to monitor the elephants from 5 p.m. until 5 a.m. and logging what she observed. In particular, she was tracking Kamala, a female elephant with arthritis, which causes her difficulty in laying down and getting up.

Noroski said she focused on “trying to determine which elephants she sleeps best with, if she sleeps best by herself, if there are any social dynamics that appear during the night that I [could] let the keepers know about,” said Noroski, who majored in environmental science and minored in conservation studies. “That’s all really significant information because their sleep is important to their health, and if any mammal is losing sleep, they could become more susceptible to illness.”

Noroski’s findings will help the zoo’s management create pairings that offer the best sleep for each of their five elephants, said Fortner, who graduated from Mason with a integrative studies degree and a concentration on applied global conservation.

When Noroski wasn’t behind the computer, she could be found performing zookeeping tasks and shadowing Fortner as she interacted with, trained and completed wellness checks with the elephants.

That’s exactly why Fortner said she also “fell in love” with the SMSC program.

“It means so much,” Fortner said of being able to mentor students in the same way she was mentored. “Once I found my path, I found that having those practicums and hands-on learning experiences helped me make that decision.”

Related: How to move past despair and take powerful action against climate change

“For the mentor side of it, it’s giving back to the conservation community,” she said. “It was really important for me to not only take care of elephants and give back to conservation in that way, but to help people that also want to do this see that this is possible.”

Noroski, who grew up in Pittsburgh, said she chose Mason after researching schools with the best conservation programs. Being at SMSC with a small cohort of students and teachers was one of the most rewarding parts, she and Fortner agreed.

“It’s a great program where you get really personal attention as well as amazing practical experience that you will not just be able to find anywhere else,” Noroski said. “You are put in a position where you are pretty much handed useful, practical experience in the real working world. That’s invaluable when you’re an undergrad and trying to get your foot in the door.”

“I have made great connections, not only with people here at the zoo, but also with my [SMSC] teachers who are active conservationists,” Noroski said. “They’re super-willing to help students find opportunities as well as connect us with other people—that’s a really unique thing you can’t just get in any conservation program.”

This article has been edited from the original version appearing on the George Mason University website.