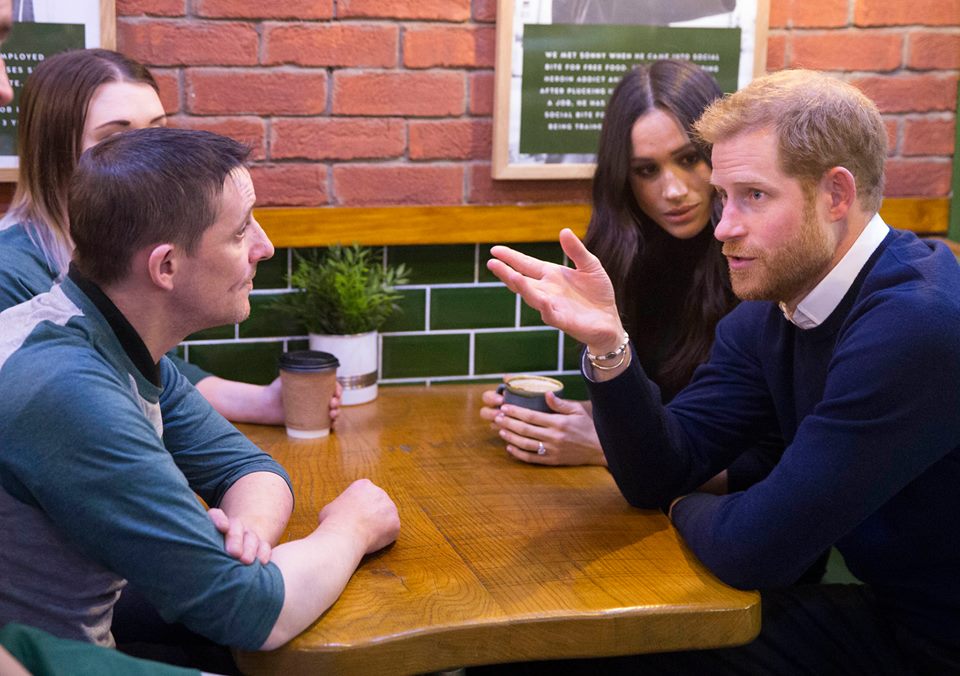 For the homeless, sleeping under the stars isn’t a choice—they’ve got nowhere else to go. Now one of Scotland’s best-known social enterprises has a plan to show more privileged people—including wealthy celebrities—how that feels, while trying to raise $50 million for homelessness and refugee causes around the world.

Social Bite Café, which provides free food to the homeless and the hungry at its five restaurants in Edinburgh, Glasgow and Aberdeen, has organized The World’s Big Sleep Out in at least 50 towns and cities around the globe. Actors Will Smith and Helen Mirren and Coldplay lead singer Chris Martin have committed to participate. To better understand the homelessness experience, at least 50,000 people will sleep outside on the night of Dec. 7, 2019, in places like Times Square in New York and Trafalgar Square in London as well as Chicago, Madrid, Belfast, Mumbai, Hong Kong, Manila and many other cities.

For college-age students with an interest in social enterprises like Social Bite, Scotland will be the destination for the Sullivan Foundation’s next study-abroad program in the summer of 2020. Running from June 4-July 4, the program will focus on leadership and social entrepreneurship. Click here for more information.

Josh Littlejohn, Social Bite’s co-founder, said anyone is welcome to join the sleep-out. “Whether you’re sleeping out at an official event or you’re hosting your own sleep-out in your back garden, for one night let’s walk in the shoes of people that we would normally walk past,” he said in a recent video promoting the event.

Founded in 2012 by Littlejohn and his partner, Alice Thompson, Social Bite Café is a chain of five sandwich shops that gave away more than 140,000 free, high-quality food and drink items last year to people in need. As part of the chain’s “pay it forward” model, other customers pay for their own meals and donate money to provide food to less fortunate guests.

More than a social venture, Social Bite quickly evolved into a popular and highly competitive brand with a reputation that has spread across the UK—not to mention the Atlantic Ocean. The company has drawn attention—and donations—from actors Leonardo DiCaprio, George Clooney and Chris Evans. In February 2018, the UK’s Prince Harry and his wife, actress Meghan Markel, both advocates of social entrepreneurship, visited one of Social Bite’s Edinburgh locations, met the staff and toured the kitchen. 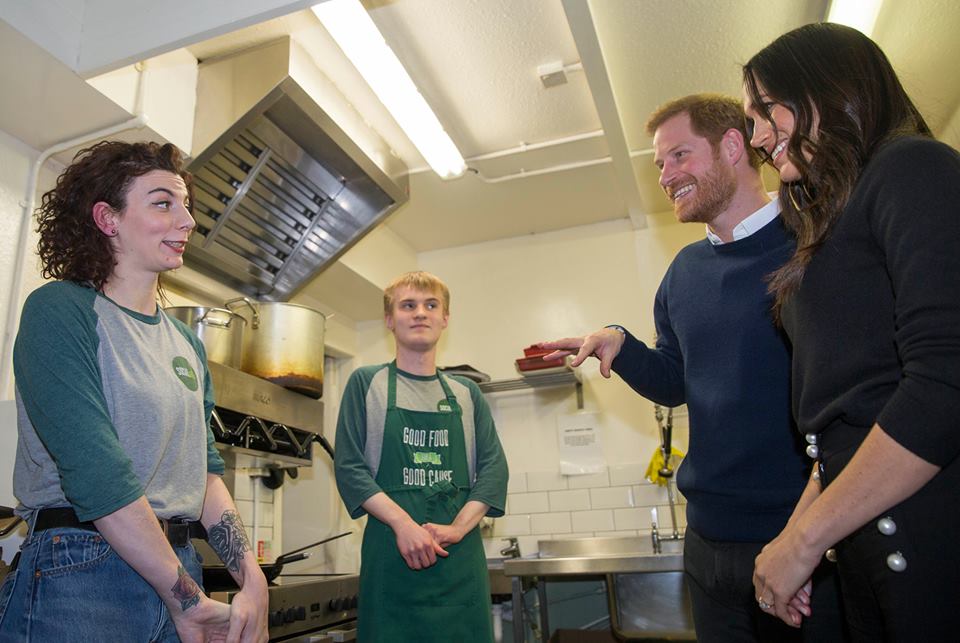 The UK’s Prince Harry and Meghan Markel, both advocates of social entrepreneurship, toured the Social Bite Cafe kitchen and met with staff in February 2018.

Thompson and Littlejohn were inspired by Nobel Peace Prize-winning economist Professor Muhammad Yunus to launch the eatery. “Since the beginning, we had that attitude that it was not going to be a small, one-off café,” Thompson told RestoConnection. “We made sure the branding looked very corporate. We wanted Social Bite to look like a shop that could be opened somewhere else.”

From the start, Thompson and Littlejohn used their profits to operate projects that benefit the homeless—and made sure everyone knew it. “We communicated on our social mission,” Thompson told RestoConnection. “We made clear that we were giving profits away and that by coming to us, customers could contribute to something better. Our mission attracted the local press and then the national press. I think the branding and the way we dealt with the press helped us (in) competing with high-end brands.” 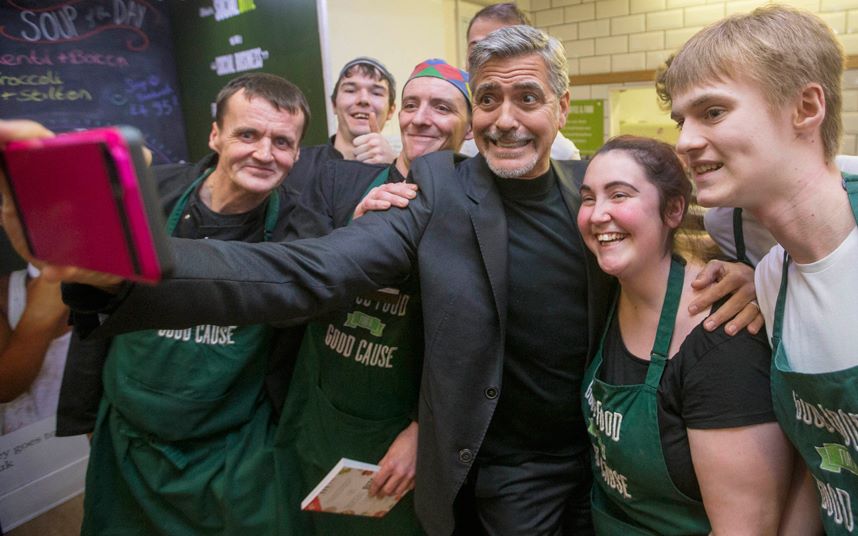 George Clooney visited Social Bite Cafe in 2015 and posed for photos with the staff.

After opening their first Social Bite Cafe location, Thomas and Littlejohn befriended a homeless man and often gave him food and drinks. They eventually hired him as a dishwasher. “Then, one day he said he had a brother that was also homeless and would like to work for us,” Thompson recalled. “We employed him as well, and then they had friends who also wanted to work … And we thought that employing homeless people should be part of our business model. From that day forward, we decided that at least ¼ of all our employees should come from a homeless background.”

With Chef Dean Gassabi of Maison Bleue, Social Bite also operates Vesta Bar & Kitchen in the west end of Edinburgh. It serves Scottish and French cuisine, donating 50 percent of its profits to charities and causes selected by staff members while the other half goes back to Social Bite. Another shrewdly branded social business, Vesta is known for slogans like “Feel Good Food, Feel Good Actions,” “Eat One, Treat One” and “Get Lunch, Give Lunch.” 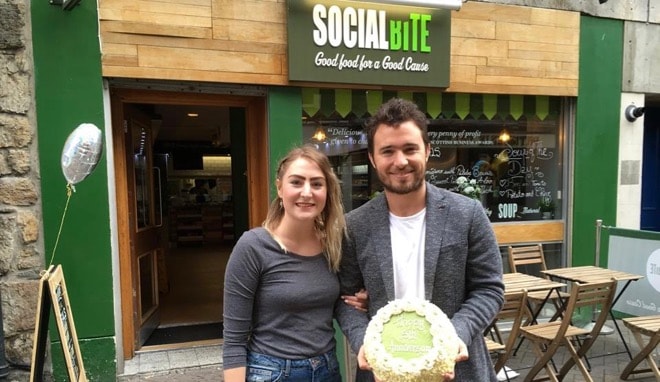 Alice Thompson and Josh Littlejohn are the brains behind both Social Bite Cafe and its homeless program, the World’s Big Sleep Out.

The journey to pulling off December’s international sleep-out began in 2016. The Social Bite owners wanted to help Scottish business executives better empathize with homeless individuals. They organized the CEO Sleepout, in which 350 business leaders slept outside on a cold November night. The event raised more than £550,000 and led to another fundraiser, Sleep in the Park, in 2017. For that campaign, billed as “the world’s largest-ever sleepout,” 8,000 people slept outside at Princes Street Garden and helped raise more than £4 million. They repeated the event in 2018 with 10,000 people in four Scottish cities and brought in nearly £8 million for their quest to end homelessness.

The success of those sleep-outs led to this year’s global event. Social Bite has also developed a similar event for schoolchildren called the Wee Sleep Out. Fifty percent of the funds raised will support local charities in participating cities, while the other half will go to global charities, including the Malala Fund, UNICEF USA and the Institute of Global Homelessness. The ultimate goal is to help 1 million homeless and displaced people worldwide.

Related: The world’s top plastic polluters say they will join the fight to reduce plastic waste.