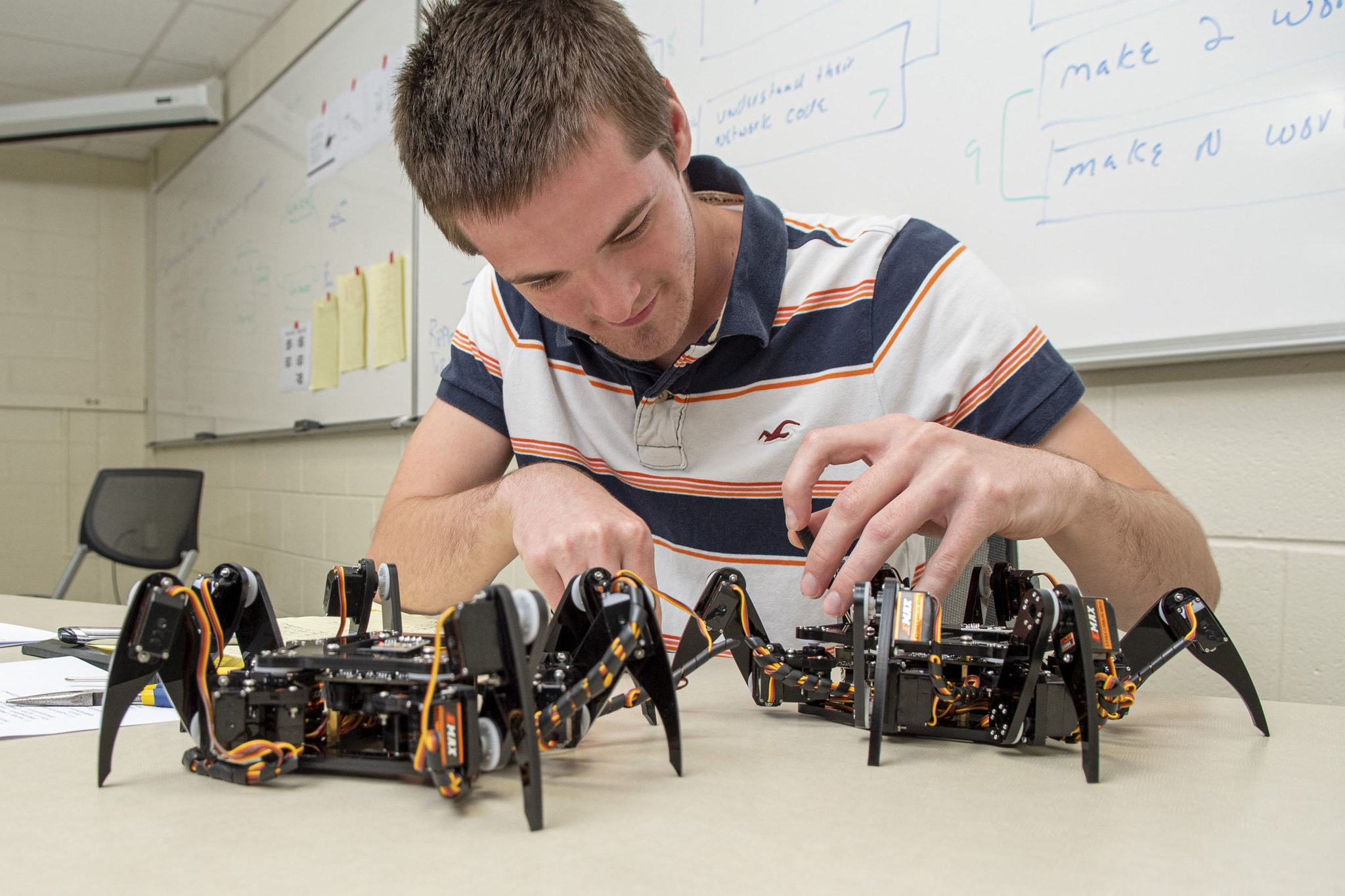 Spivey’s research involves developing different gaits (the way/order the legs move) and postures (looking scared, looking aggressive) for six-legged robotic spiders. In a lab in the Copley Science Center, Spivey is developing a set of sensors that allow the spiders to perceive the environment and a set of stimulus-response behaviors for the spiders to respond to what they sense.

“In other words, I am making three large, six-legged robots that will respond to the world like real spiders do,” Spivey says. “For example, I want to program the robots to communicate about what obstacles to avoid—say, an object that is one meter away. I’m also working toward programming the spiders to react with specific behavior (such as twitching) in order to appear aggressive if they perceive a threat. If aggressive, the robots may walk faster and/or puff up to look bigger.” 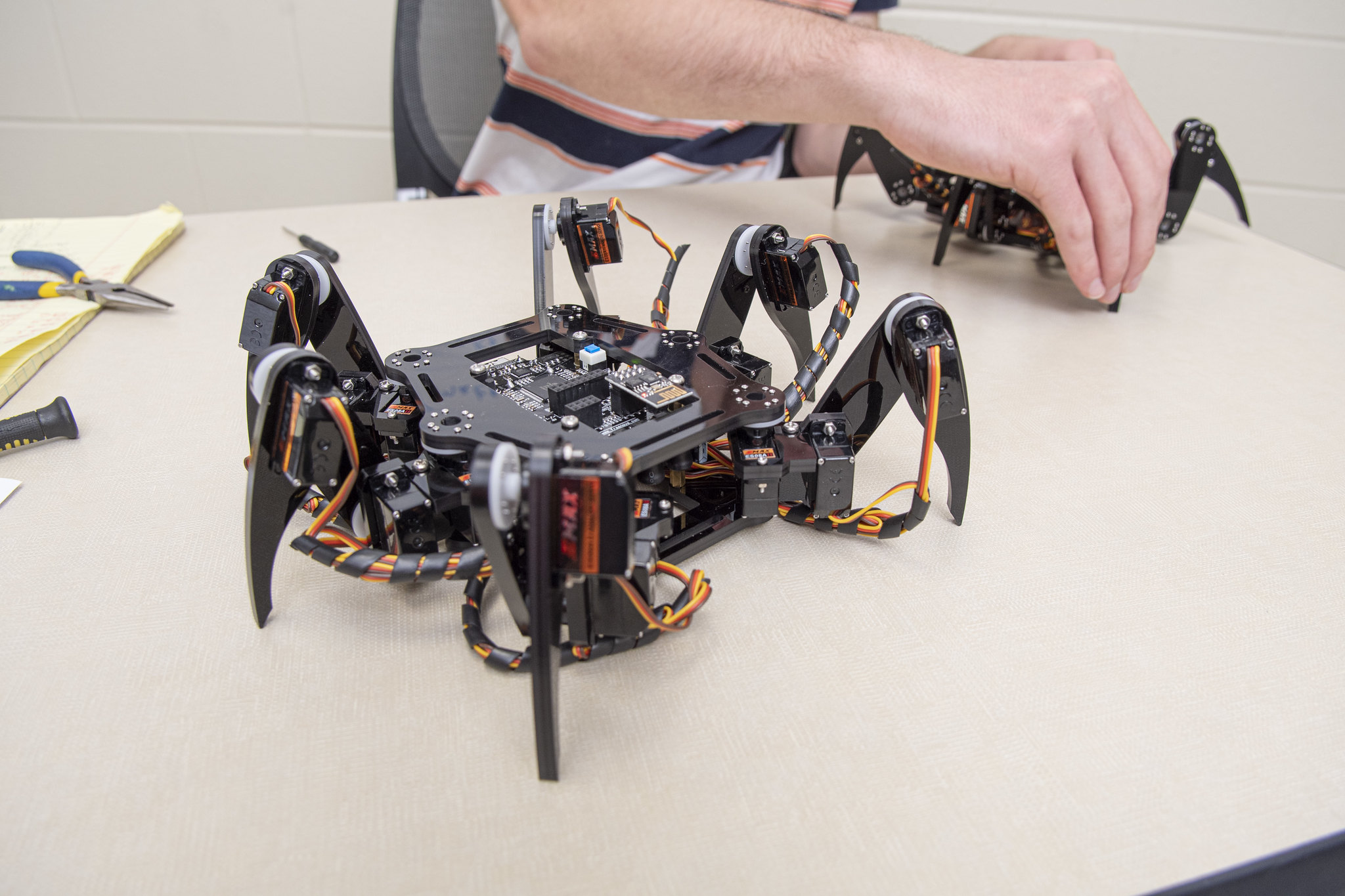 Part of Max Spivey’s research involves programming robots to communicate with each other about which obstacles to avoid in their environment.

Sensors, Coding, Behavior
The spiders are made of acrylic plastic, with micro-controller boards for the “brain,” servos (an automatic device that uses error-sensing negative feedback to correct the performance of a mechanism), and ultrasonic sensors to detect movement. Each spider, connected to a central server called a blackboard, will relay information to the blackboard, determine what to do with it, and allow the other robots to pull the information if needed. This information will most likely be about the surrounding environment and what behaviors (aggression, passivity, curiosity) the spiders will display as they respond to their environment.

Each day, Spivey adds sensors to the robots, alters code, or creates new code for the robots to use. His research goals change day by day and follow a longer-range plan that he developed for his project. He works towards those goals in the morning, and he tests the hardware and software in the afternoon and evening.

Great Ideas + Alumni Connections
The idea behind Spivey’s research came about when McManus met with Scot Tanner, founder and producer of Stormcatcher Films in Petersburg, Virginia. Tanner was interested in finding students with robotics experience to design and program a robot spider that can move and interact with its surroundings.

“One of the big benefits of working at R-MC is that we have highly engaged alumni and staff who help faculty make connections to support our current students,” says McManus, who later met with R-MC alum Pat Filoteo, architect & principal project manager for Microsoft, Inc. – Windows Azure. “Pat and I talked about opportunities for him to engage with our students, and he generously offered to fund Max’s SURF project.”  Thanks to Filoteo, Spivey is known as the 2019 Filoteo Fellow. 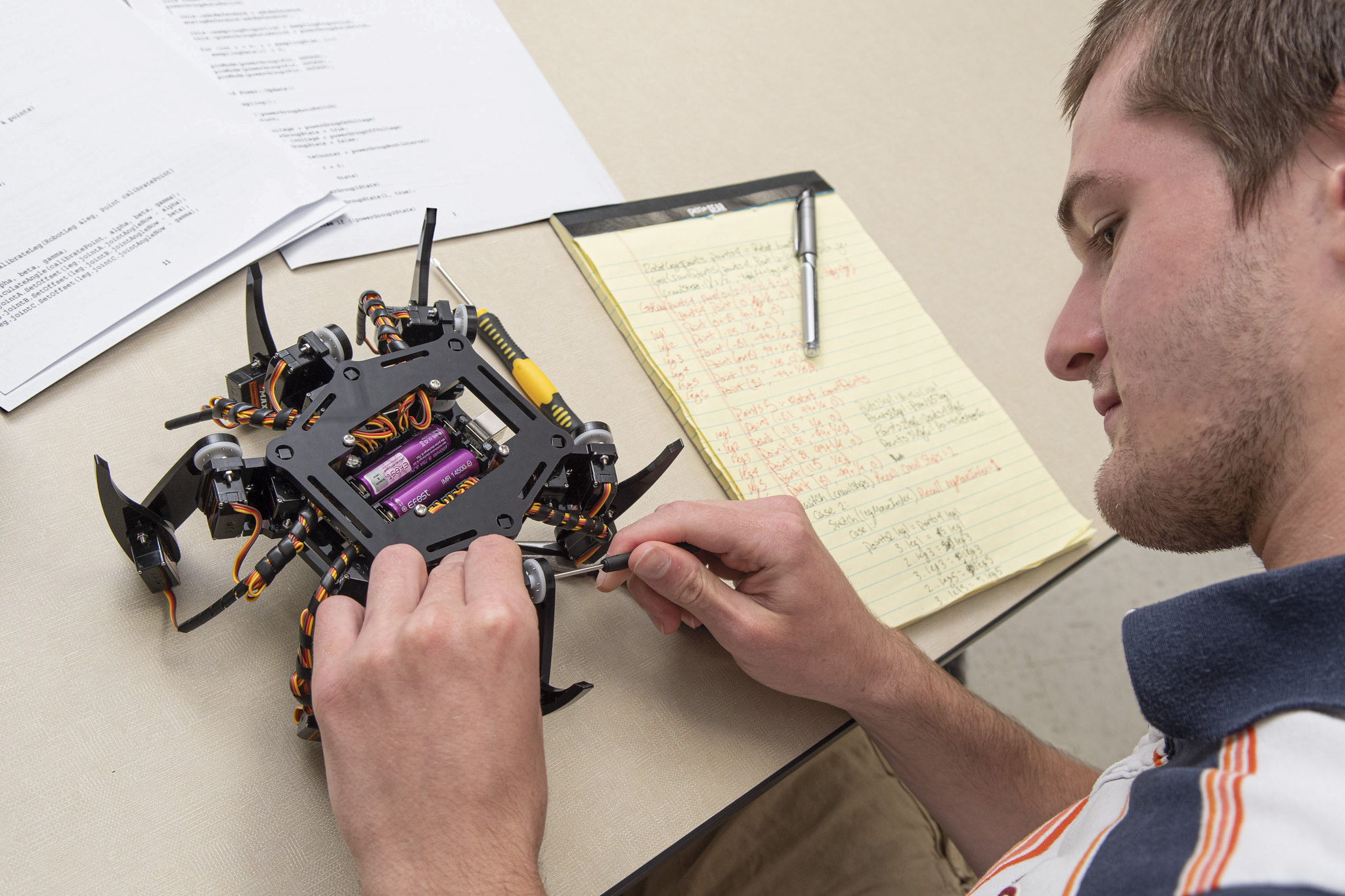 Spivey’s spider robots are being programmed to learn certain behaviors, including aggression, passivity and curiosity.

“The equipment we are using in Max’s research—including the three robot spiders, sensors, and specialized batteries, isn’t something we can cover,” says McManus. “Thanks to Pat, we were able to purchase the items Max needed to get his research underway. Alumni-student connections are part of what makes R-MC unique.”

This article was adapted from the original story appearing on the Randolph-Macon College website.