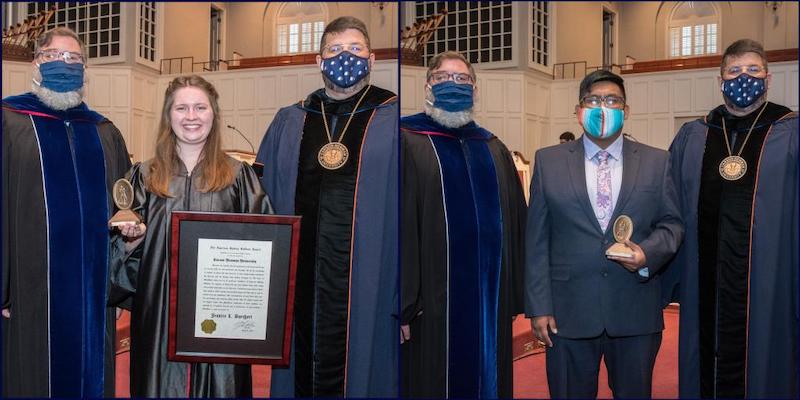 “We are proud of Jessica and Miguel for what they have accomplished. They have truly demonstrated what it means to be servant-leaders,” said University President Charles A. Fowler. “They leave Carson-Newman with our prayers and blessings on what we are certain are bright futures.”

A resident of Jefferson City, Tenn., Borchert pursued a major in art. She began her time at Carson-Newman at the age of 16 when she was a junior in high school taking dual-enrollment classes. She was the very first high school student to become a Carson-Newman Faith and Justice Scholar. Once she graduated high school and matriculated to C-N, she progressed from Junior Scholar to Scholar and graduated with the record for the longest-serving Faith and Justice Scholar.

Through her time as a Faith and Justice Scholar, Borchert served multiple community partners, ranging from Appalachian Outreach to East TN Children’s Hospital to Mossy Creek Counseling and more. She has also been recognized for her artistic accomplishments, including being showcased in over a dozen solo and group exhibitions as well as taking home multiple prizes for her filmmaking, including first prize in the Student Competition of the 2017 Knoxville Film Festival.

“During her tenure at Carson-Newman, Jessica has set herself apart in academics and service and has embodied the C-N values of truth, beauty and goodness,” said Dave McNeely, coordinator of the Faith and Justice Scholars program.

Flores, a business major, hails from Gatlinburg. Tenn. As a Bonner Scholar, he logged more than 1,650 service hours during his time at Carson-Newman, more than any other senior in his class. He volunteered at the Jefferson City Public Library, Habitat for Humanity and the Center for Community Engagement.

“He is extremely intelligent and has used his knowledge of business and practical skill set to directly benefit our sites and projects many times over,” said Center for Community Engagement Director Matt Bryant Cheney. “He is a critical thinker with a strong moral compass who makes every team better that he’s a part of.”

This article has been edited slightly from the original version appearing on the Carson-Newman University website.