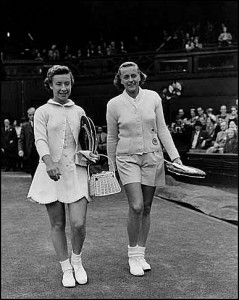 If you’re a young girl who takes for granted her right to go the distance in sports along with the boy next door, tip your cap to Betty Rosenquest Pratt, who almost 60 years ago qualified for the second singles spot on her South Orange, N.J. high school boys’ tennis team, and didn’t give up when she got the boot for winning a match in competition. Girls’ teams didn’t exist, Betty said, but the state athletic association decided it would be mentally harmful to young boys if girls beat them at their own game. She practiced instead at the Berkeley Tennis Club with her tennis buddy, Dick Savitt, who went on to win the 1951 Wimbledon men’s singles title.

Betty, a member of the Sullivan Scholars program while attending Rollins College, made six trips to Wimbledon and considered two of them especially memorable. In 1954 she lost in the semis to Maureen Connolly.

“She killed me,” Betty said, “but I was thrilled to be there. I won the equivalent of $75 and a bronze medal.”

In 1957 she played England’s new hope, Christine Truman, in the quarterfinals.

“When I walked into the stadium I knew I wasn’t just playing one person; this was very special. We had wonderful points in a close three setter. There was an exhilaration; I was playing at the peak of competition in my mind. I felt in a way I had even won the crowd near the end. When Chris boomed the last forehand away and won, I ran up to the net as though I had won. I was very excited for her because England had waited so long for someone to come through.”