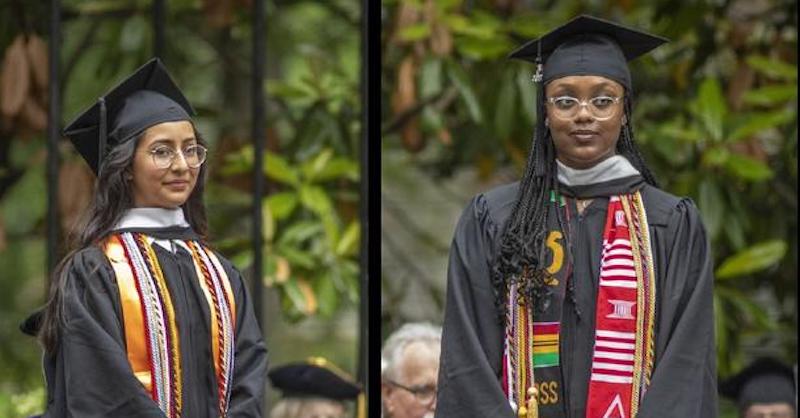 A trio of dedicated changemakers—including two students and one community member in Memphis—have received the Algernon Sydney Sullivan Awards at Rhodes College for putting service to others above their own self-interests. Mi’Destini Victorian and Dulce Maria Salcedo are the student recipients, while Christy Weir Krueger received the community member award.

Mi’Destini Victorian, a psychology major, served both Memphis and her hometown of Houston, Tex., in her role as a Bonner Scholar. She was a library intern with the KIPP Memphis Collegiate Schools, where she remotely managed library data for weekly distribution of books during the pandemic, constructed the elementary library through organizing and leveling hundreds of books, and facilitated a weekly book club for middle school students.

Victorian also served as the marketing and research coordinator for #WomanStrong Nonprofit of Houston, an organization centering on initiatives and events for the personal development of women, children and families.

Related: Sullivan Award recipient is hero on and off the football field at Davidson College

On the Rhodes College campus, Victorian planned and led programs and events that support mental health and wellbeing, including an education panel titled “As Within, So Without” and a scholar supply drive known as “The Red Backpack Project” to support KIPP Memphis Academy Middle School for the upcoming school year. Victorian accomplished all of this while serving as president of the Black Student Association and as a member of Delta Sigma Theta Sorority, Inc.

In recommending Victorian for the Sullivan Award, her peers said, “Mi’Destini is a force for good in her communities both here in Memphis and in Houston, which makes her truly embody the ideals of the Algernon Sydney Sullivan Award.”

Dulce Maria Salcedo, an international studies and history major from Jackson, Tenn., has served as a Rhodes Student Government senator and as chair for the Diversity, Equity and Inclusion Committee, where she led multiple initiatives to support equity and inclusion on campus. As a peer assistant, Salcedo served as a compassionate mentor for incoming students. Her work in this role was critical to supporting first-year students as they navigated the difficulties of the transition to college, particularly during the pandemic.

Beyond Rhodes, Salcedo assisted undocumented high school students in their college admission process, and in her hometown, she has made a significant impact by working at the city’s first-ever nonprofit immigration law organization. Her willingness and ability to make legal resources available to Spanish-speaking communities helped many individuals gain immigration status and become better equipped in navigating the complex immigration system.

“Dulce Maria is truly a reflection of the values embodied by the Algernon Sydney Sullivan Award,” her peers said. “Her personal experience and dedication to many communities will leave a tremendous impact even after she leaves Rhodes.”

Related: This Sullivan Award recipient has helped hundreds of DREAMers get their college degrees

Christy Weir Krueger majored in history at Rhodes but credits her accounting professor Sue Legge for her passing the Certified Public Accounting exam. Today, Krueger is vice president of finance and operations for the Make-A-Wish Foundation of the Mid-South. Throughout her tenure at Make-A-Wish, she has hired numerous Rhodes interns, who have received credit while learning about nonprofit management and accounting.

A devoted Rhodes alumna, Krueger has served as a career networking volunteer and fundraising advocate for the All Roads Lead to Rhodes fundraising challenges, has advised the Chi Omega chapter, and has helped to recruit top high school students to the college. She served as a member of the ad hoc committee to determine the Principles for the Process of Discernment Related to Contested Names that resulted in the naming of Southwestern Hall at Rhodes College.

As president of the Rhodes College International Alumni Association, which has more than 13,000 members, Krueger led the association throughout the pandemic. “At a time when our alumni were unable to maintain the personal interaction and engagement that are the foundation of a Rhodes education, Christy’s positive outlook and enthusiasm kept us motivated and inspired,” said Director of Alumni Programs Tracy Patterson. “She was always willing to collaborate and always said ‘yes’ when asked to serve.”

This article has been edited from the original version appearing on the Rhodes College website.