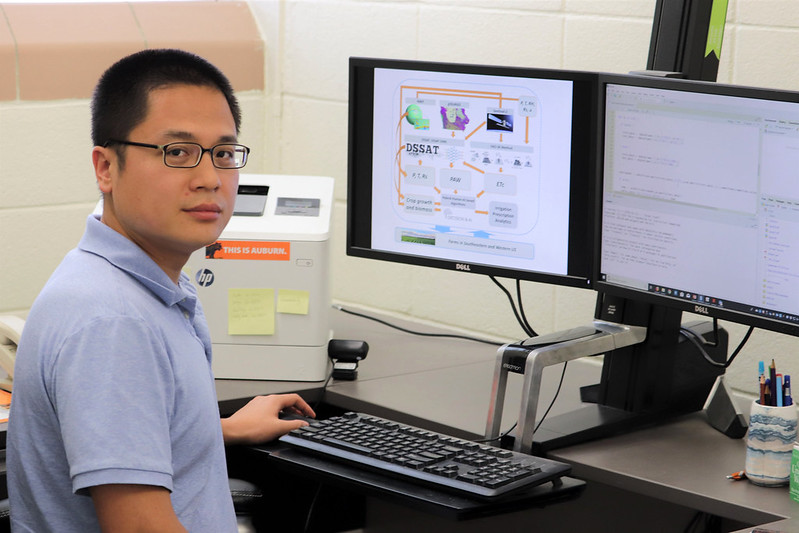 Growers throughout the U.S. are finding themselves in the middle of a national water crisis, with agriculture constituting approximately 80 percent of consumptive water use, largely in the form of irrigation. At the same time, drought has been increasing in intensity and frequency.

“Agricultural production increasingly requires water inputs to sustain high crop productivity in a changing climate,” said Di Tian, assistant professor in the College of Agriculture’s Department of Crops, Soil and Environmental Sciences and the lead researcher in a $500,000 three-year interdisciplinary project funded by the USDA National Institute of Food and Agriculture.

Current agricultural water use is simply not sustainable in many parts of the United States, and there is an urgent need to improve water-use efficiency, he said.

“In the Central High Plain regions alone, about 30 percent of the water stored in Ogallala Aquifer already has been consumed,” Tian said. At current use rates, as much as 80 percent of the stored aquifer water will be consumed by 2060. And, the Southeast has experienced several large droughts since 2000, including the most recent one during this past fall.”

The frequency and intensity of droughts is driving an increase in irrigation, Tian said. Since 1998, irrigation has increased by 60 percent in Alabama and 56 percent in Georgia, the largest increases among the 31 Eastern states.

“The central hypothesis of the project is that the CSA enabled by the novel technologies will improve site-specific forecasts for crop and soil water conditions and irrigation scheduling,” Tian said.

The framework will be validated with information gathered from farmer fields in California and Alabama, including cotton, corn and peanut fields in Athens, Tanner and Town Creek, Alabama, and a tomato field in Davis, California.

The framework will be no cost, since it is driven by open-source, publically available numerical weather prediction model forecasts, Sentinel-2 satellite images and crop simulation models, Tian said.

“The proposed CSA framework will serve as a foundation for any irrigation decision support tool or software and will provide efficient, low-cost and usable information for farmers, landowners and decision makers to improve their irrigation management and maximize water-use efficiency.

“Outcomes from our project are expected to lead to intelligent irrigation decision making aimed at reducing the water footprint in agroecosystems as well as minimizing soil nutrient loss and environmental impact due to over-irrigation,” he said.

The final product of the research will be new methods for accurately and efficiently monitoring and forecasting crop water requirements and soil water content at high resolution and new technologies for evidence-based irrigation scheduling, Tian said. The project’s extension personnel will provide supporting instruction on how to use this information as part of a precision-irrigation management program.

This story was adapted slightly from the original article appearing on the Auburn University website.