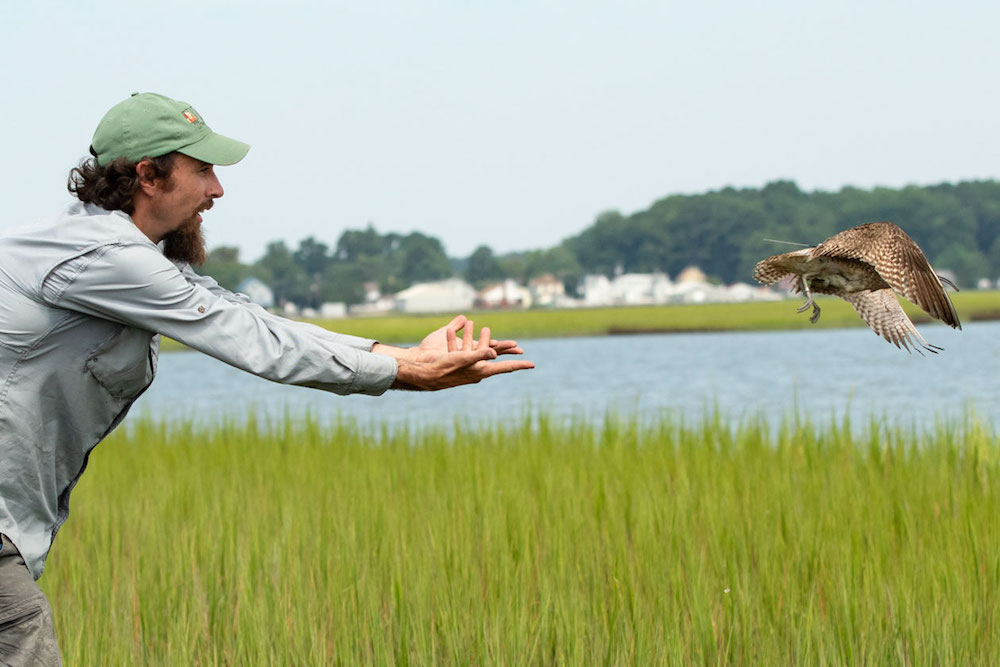 Whimbrels—leggy, marathon-migrating shorebirds—may have a lot to say about the siting of Dominion Energy’s offshore wind turbines in the Port of Virginia.

Researchers from the Center for Conservation Biology (CCB) at William & Mary, a Sullivan Foundation partner school, have been trapping whimbrels on Northampton County mud flats. The birds are released after being fitted with tracking devices.

Bryan Watts, director of the CCB, says the devices will log not only the route of the southbound whimbrels, but also the altitude of each bird. The data will reveal if the birds are flying through Dominion’s lease site and whether they’re flying at altitudes that would be dangerous to the birds once the wind farm is up and running.

“From a conservation perspective, when we think about erecting hazards, the main strategy to avoid large mortality is turbine placement,” Watts said.

The whimbrel project is a collaboration involving the CCB, The Nature Conservancy and Dominion. Dominion’s Coastal Virginia Offshore Wind project is slated for completion in 2026. The business end of the initiative will be a wind farm some 27 miles offshore from Virginia Beach. Dominion Energy’s web page reports that the wind farm will include 176 turbines, each 800 feet tall. Watts noted that the turbine lease area is sited in federal waters, and the project is expected to supply electricity to around 660,000 homes.

“The other side of the coin is that we have the western Atlantic flyway, with one of the greatest bird volumes on the planet moving along the coast,” Watts said. “Migration on the flyway involves a lot of different species. So, there’s a concern about putting hazards up in the airspace within that area.”

The implications for birds, especially migrating species, are serious, Watts said. Some 200 species use the western Atlantic flyway to commute between southern wintering grounds and northern breeding areas. But he noted that the wind farm does not put all migrating bird species at risk.

“Most of those birds fly down a real thin veneer along the coast; they follow the coastline—either overland or they follow it in nearshore waters,” Watts said. “And so one of the early recommendations to avoid mass casualty events was to place the wind farms farther offshore to avoid that massive flight along the coast. And Dominion has done that.”

But two classes of birds make their migratory flights or live most of their lives farther offshore—over the Continental Shelf where the wind farm will be built, Watts explained.

“One group would be seabirds, like gannets, common loons and red-throated loons, even Atlantic puffins, dovekies and species like the red-breasted mergansers,” he said. “These are species that either migrate offshore or actually winter offshore.”

“These are species that come here to stage,” he said. “Most of these species winter in northern South America, so they’re cutting across the Atlantic from here.” 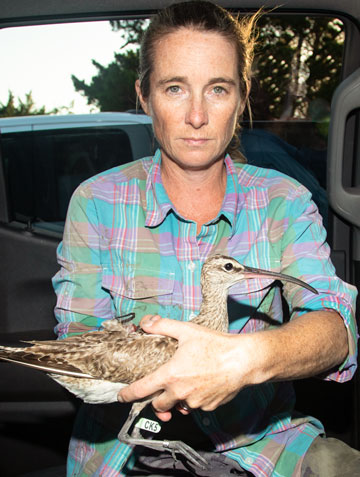 And that’s where whimbrels come in.

The CCB has been studying whimbrels for years, tracking their migrations from as far north as the Arctic tundra to South America. Watts said that the birds refuel on fiddler crabs in the marshes of the Delmarva Peninsula, putting on weight for their flight across the ocean. Whimbrels are large enough to carry the tracking transmitters, but until recently, the devices only generated data from the birds’ route.

“The new technology that we’re using in this particular study has an altitude sensor,” Watts said. “So we’re actually going to be able to track what the takeoff trajectory looks like.”

He said the study should address two questions. The first is how fast the birds climb when they take off from their staging areas. The second question concerns the whimbrels’ terminal altitude.

Related: University of Alabama gets funding to shift to more electric buses

“If their terminal altitude is below the turbine height, then there’s a concern that they are going to fly through the turbine field,” Watts said.

If the whimbrels’ terminal altitude is above turbine height, examination of the birds’ takeoff trajectory could provide information to suggest adjustments to the siting to avoid building turbines in the whimbrel takeoff zone.

CCB researchers began fitting the whimbrels with the new transmitters in early August, trapping the birds on mudflats using noose mats—a hardware cloth base equipped with fishing-line nooses. The birds walk across the mats and their feet get caught in the nooses.

Watts stressed that the researchers monitor the noose mats from nearby boats, removing each bird promptly and unharmed for weighing and fitting with a CCB-designed transmitter harness. The researchers found noose mats to be a superior method for trapping whimbrels.

Watts said the new generation of transmitters the CCB uses on the whimbrels allows the researchers to program in a “geofence,” corresponding to the target area of the outer Continental Shelf. “And when the birds enter that geofence, the acquisition rate of fixes goes way up,” he said. “Within the geofence, we’re collecting data at a point every 10 seconds. So that will give us really good resolution on trajectories going out of the staging area.”

The transmitters connect with the cell phone network, trying to download data once each day. “If it doesn’t connect to the cell tower, it will continue to collect and store data. A connection isn’t going to happen over the ocean where we don’t have any cell towers,” he said. “So once this bird gets to South America and the transmitter is able to connect to a cell tower, it’ll download all that data. So there may be a lag there.”

Watts said the project—and the Dominion/CCB/Nature Conservancy collaboration—can serve as a model for other wind farms planned along the Atlantic coast and beyond.

“This work is breaking new ground in terms of understanding the risks of offshore wind facilities to migratory birds,” he said. “Like much of the work we do, the focus is on addressing questions that are pivotal to management questions.”

This article has been edited slightly from the original version appearing on the William & Mary website.