Stewardship of the earth’s resources will take a significant leap forward when Sullivan Foundation partner school Wofford College opens the Chandler Center for Environmental Studies in late 2020. Wofford broke ground on the facility October 18, 2019, and the Center will open next fall.

The 20,000-square-foot facility will be Green Globe Certified for its sustainable and environmentally conscious features, such as a partial green roof and solar roof panels. The building will feature advanced laboratory space, a seminar room, outdoor patio and garden spaces, and classroom and office space for Wofford’s Department of Environmental Studies as well as other sciences.

The building will also include a system for capturing rainwater for irrigation and will use cross-laminated timbers made of sustainable, all-wood construction.

Wofford celebrated three of its Environmental Studies scholars—Ireland McGaughey, Casey Harcourt and Reeves Goettee—on the cover of school publication Wofford Today. The three women are all members of the 10th anniversary class of environmental studies majors at Wofford. “They’re products of everything the program was designed to be,” according to a Wofford press release, “and they’re going to make a difference wherever they go—no question!”

“The students who major in environmental studies usually come from one of two pathways,” said Dr. Kaye Savage, professor and chair of the department. “Some have grown up hunting and fishing and spending time in the woods with their families. They love that culture and love being outside. Then we have the students who come because they feel like the world is falling apart, and they need to make a difference.”

Savage speaks from experience when she says those differences make for interesting class discussions. Add the interdisciplinary nature of the curriculum to the mix, and it’s not uncommon for a topic such as climate change to start with science but jump to politics, the economy, demographics, denial and even religion or science fiction.

“The interdisciplinary nature of the major is what sets Wofford apart from other colleges and universities,” says John Lane, a 1977 Wofford graduate whose team taught the class and learning community that became the model for the major. Lane became the first director of the environmental studies program, which was designed to be broad with a rigorous fieldwork component. Interdisciplinary courses—an introduction and a senior seminar—bookend required courses and electives that highlight environmental issues in the context of different disciplines.

“You can connect environmental studies to anything,” Harcourt said. “That and the hands-on nature of the subject drew me into the major.” 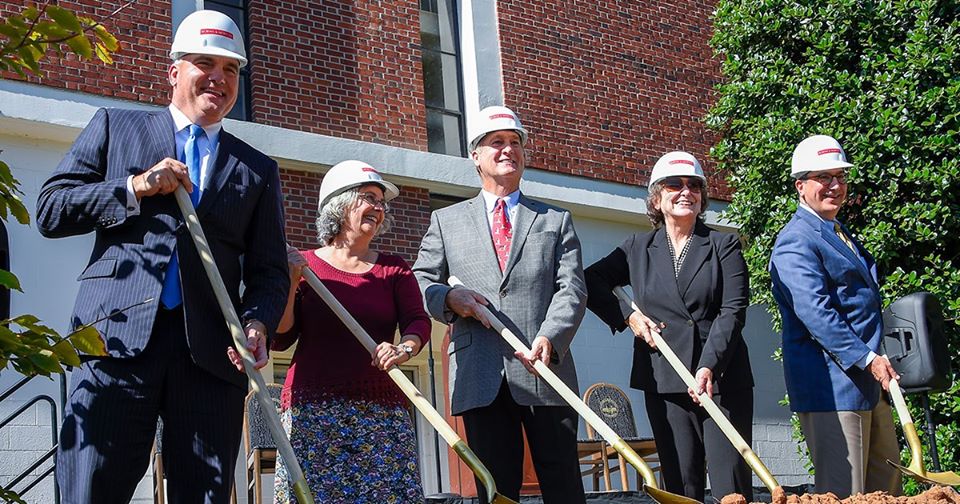 Savage explained that breadth is important because environmental problems cross boundaries. “If we’re going to tackle those problems, we have to have an understanding of complex systems,” she says.

Students gain depth through the major’s capstone experience. “The capstones are time-consuming but rewarding,” said Dr. Terry Ferguson, a 1975 Wofford alumnus, associate professor and senior researcher for the Goodall Environmental Studies Center. “Working with students on projects of their own choosing and advising them as they ask questions and work through problems has turned out to be one of the more critical aspects of the program.”

Harcourt chose to do a capstone project on the practicality of green roofs. It builds on knowledge in sustainability, physics, botany, data analysis and even aesthetics.

Goettee combined photography and environmental studies for her capstone, which explores how humans interact with the landscape. She took most of the photos while she was in New Zealand. “I call the photos anti-selfies,” Goettee says. “My project is a commentary on place and how people should be present in the landscape, instead of making it all about them.”

McGaughey’s capstone delves into the world of hydroponic farming. “This major speaks to my soul,” she says.

Natural resource depletion, overpopulation, deforestation, genetic engineering, global warming … Goettee still remembers the waves of environmental gloom and depressing statistics she and other students discussed for weeks in one of her first environmental studies courses.

“On one hand, I was compelled to act, but on the other, I felt like I was losing hope,” she said. “To lift our spirits, Dr. Savage had each of us bring in a positive article about the environment. It was really uplifting.”

The exercise wasn’t on the syllabus, but it’s what her students needed, so she adapted. That’s something Savage says she’s gotten better at since coming to Wofford.

Savage’s background was in environmental science, specifically geology and geochemistry. She’s also an artist, and her art—handmade paper and mixed media sculptures that explore geologic and hydrologic data—was her way into a department shared by Lane, a poet, environmental writer and professor of English, and Ferguson, a geoarchaeologist and photographer.

“This was new to me,” said Savage, whose team taught several introductory classes with Lane in the beginning to get the hang of the “studies” part of the major.

In the fall of 2020, Savage will be the department’s veteran and will become director of the Goodall Environmental Studies Center in Lane’s stead. Lane and Ferguson both will retire at the end of the spring semester. Brewitt will take over as chair of the department.

Ferguson, who has been at the college for 40 years, was just published in Nature Scientific Reports. He will continue that research on platinum levels in sediments in the Midlands of South Carolina that supports an extraterrestrial impact event that occurred nearly 13,000 years ago. He’s also working with several other research teams, including one that’s studying the Glendale area near the Goodall Environmental Studies Center.

Lane will be promoting another book, Seven Days on the Santee Delta, with two more on the way: a second novel and a nonfiction work combining autobiographical experiences growing up in Spartanburg County with Ferguson’s research on buried organic deposits. Lane also is working on another poetry manuscript.

The department’s faculty also includes Dr. Amy Telligman, assistant professor, who came to the college as part of the Milliken Sustainability Initiative at Wofford College. Dr. Jennifer Bradham and another tenure-track faculty member will join the department next year.

“Now we have a food systems lab in the works that Amy is starting, and our students will get hands-on experience—from garden to stove. That’s a direction that we didn’t anticipate 10 years ago,” Savage said. “Who knows what our other new faculty will bring to the department? It will be amazing.”

Goettee said the conversations she has had with the environmental studies faculty after class or during their labs make the department special. “They’ve guided me toward opportunities that I never would have considered for myself, and they all foster a culture of ruggedness,” she says.

“They’re right there with you,” McGaughey said. “Getting in the water. Carrying kayaks. Doing the labs. We’ve been out there in the rain, and still, somehow it’s fun.”

According to Savage, Lane was rallying a class before a particularly wet, cold lab at the Goodall Environmental Studies Center when he first used the “culture of ruggedness” phrase. It’s been the department’s motto — and a point of pride — ever since.

This story was adapted from a press release and Wofford Today article appearing on the Wofford College website.