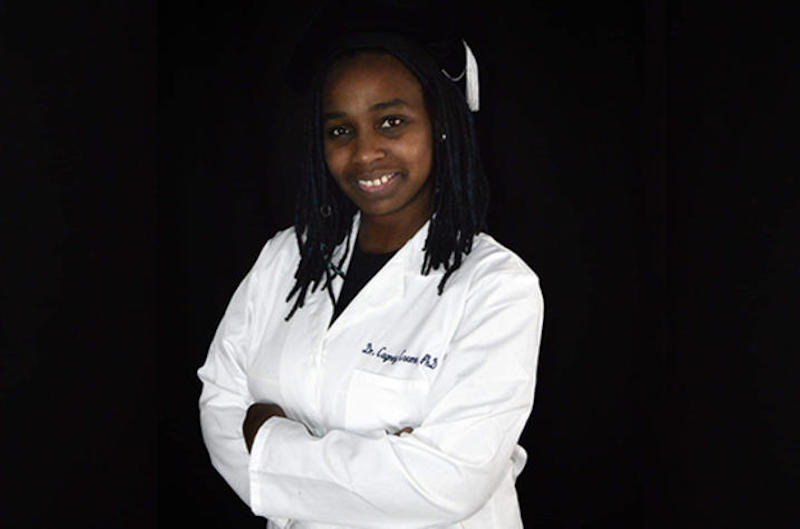 As a college student at Virginia State University, Dr. Cagney Coomer often wondered why she was the only Black woman in her science classes. And she wasn’t particularly satisfied with the answer she was given. “People would say people of color weren’t interested in science,” she recalled.

Coomer knew better. And on her way to earning her doctorate in biology at the University of Kentucky (UK), a Sullivan Foundation partner school, the Lexington native set out to prove those people wrong. She founded the Nerd Squad, a nonprofit that encourages girls of color to become interested in STEM fields. The program uses kid-friendly activities to inspire curiosity and demonstrate that science is for everyone—and that it’s a lot more fun than you might think.

Coomer, who wrapped up her Ph.D. at UK earlier this year, also received the prestigious Algernon Sydney Sullivan Award from the university for her work with the Nerd Squad and her dedication to serving others.

Coomer’s doctoral research at UK focused on genetics and unlocked the secrets of a pair of genes in the eye. “I studied two genes that had been studied in other organs, but their function in the retina was unknown,” Coomer said. “I found they’re involved in photoreceptor maintenance, survival and regeneration.”

Her dissertation advisor, Associate Professor of Biology Ann C. Morris, said Coomer “has produced an impressive body of research during her Ph.D., and she is relentlessly curious and excited about developmental biology and genetics. She is passionate about encouraging young people from underrepresented groups to believe in their potential, and she is herself a successful role model for these students as she demonstrates every day her enthusiasm and commitment to a career in scientific research.”

Coomer is also following a dream from her childhood. “Honestly, I wanted to be a scientist since I was eight,” she said. “Over the course of my years, I worked with plants, and I worked in fields. I finally got the chance to work with model organisms that were associated with human diseases—that was my real interest.”

But it wasn’t her only interest. She also wanted to make sure future young women of color could follow in her footsteps as scientists and help solve the mysteries of the universe.

“I think there are many obstacles that contribute to the lack of women of color in STEM,” Coomer says. “One is the lack of opportunity and exposure to STEM curriculum and careers. There’s the disconnect that comes with lack of representation, and there is the racism that is entrenched in STEM fields.” 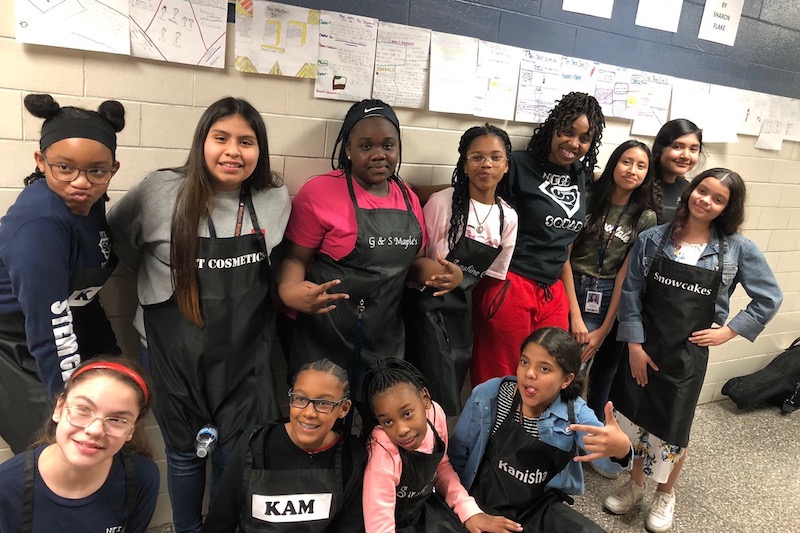 “In my city, students in [low-income] communities only get science in the 4th and 6th grades and then get biology in the 9th grade,” she added. “This leaves the students without a strong scientific foundation, resulting in those students being intimidated by math and science. Unfortunately, in the black community, scientists are rarely highlighted because history calls them innovators instead of scientists. The lack of proper labeling also creates a false sense that people of color don’t do or participate in science.”

As in every other field, representation in the sciences matters, and Coomer believes schools should incorporate more scientists of color into the educational system. “We also need students to get a strong science curriculum throughout K-8 before they are presented with biology. Furthermore, universities should be doing a better job with science outreach and building connections with the community. The NIH should not be giving money to universities or labs that aren’t giving back and building up the next generation of scientists to take our place.”

In the meantime, Coomer has taken it upon herself to help girls of color discover the wonders—and the career possibilities—of science. With the Nerd Squad, she and a group of local volunteers design and facilitate the kind of culturally relevant activities that make girls sit up and take notice. Instead of getting bogged down in standard projects like dissecting frogs or collecting leaves, the kids make perfume, plant trees, cook food and, in one innovative project, learned how to create cosmetics.

“This past semester, our subject science was biochemistry, and we turned our STEM club girls onto cosmetic chemistry—because what middle-school girl doesn’t know about makeup?” Coomer said. “First, they learned the chemistry behind making many products, from soap to lip gloss to bath bombs. Then, in the second semester, they had to develop their own cosmetic lines, from packaging to the recipes, making commercials and selling them to the community at Science Night.”

The girls also get to learn from other Lexington-area women of color who work both in STEM fields and other professions. These volunteers act as positive role models and mentors to the girls, encouraging them to think beyond the limits imposed on them by systemic racism and sexism.

“[Coomer] has reached literally hundreds of kids, mostly kids of color and kids in poverty, with the message that STEM is for them,” said Tanya Torp, a 2016 Sullivan Award winner at UK. “She hosts science fairs, bringing hundreds of family members to show up for their kids where schools have failed to see that kind of parent participation.” 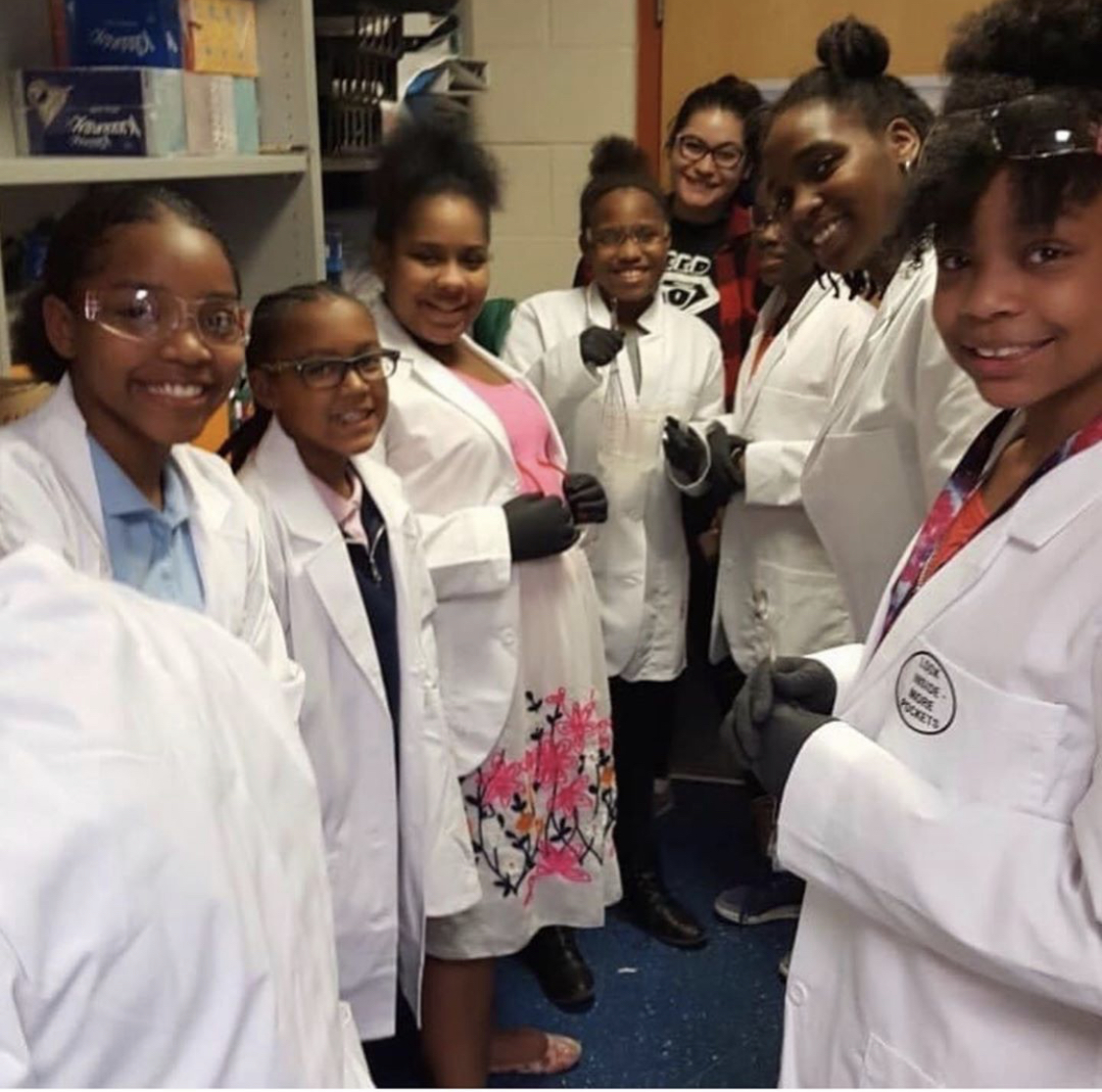 Told by some that women of color weren’t interested in science, Dr. Cagney Coomer founded the Nerd Squad to prove them wrong.

Coomer has now moved on to a post-doctoral stint at Dartmouth College, where she is studying the differences between the right and left lobes of the brain. But her passion for steering girls and women of color toward STEM careers continues. And she said she has learned a thing or two from the girls under her tutelage over the years.

“They taught me to stand in truth,” she said, “that I am a scientist, and how can I encourage them to follow their dreams when I won’t step fully into mine?”

“They taught me how to talk science—they became my sounding board,” Coomer added. “If they could understand what I’m doing, then I could get anyone to understand. They helped me find my way as a scientist.”

Want to help further the Nerd Squad’s mission of nurturing future women scientists of color? Donate to this GoFundMe fundraiser and help the organizers reach their goal of $10,000.

In addition to a direct interview with Dr. Coomer, this story also incorporates materials from an article appearing on the University of Kentucky website.